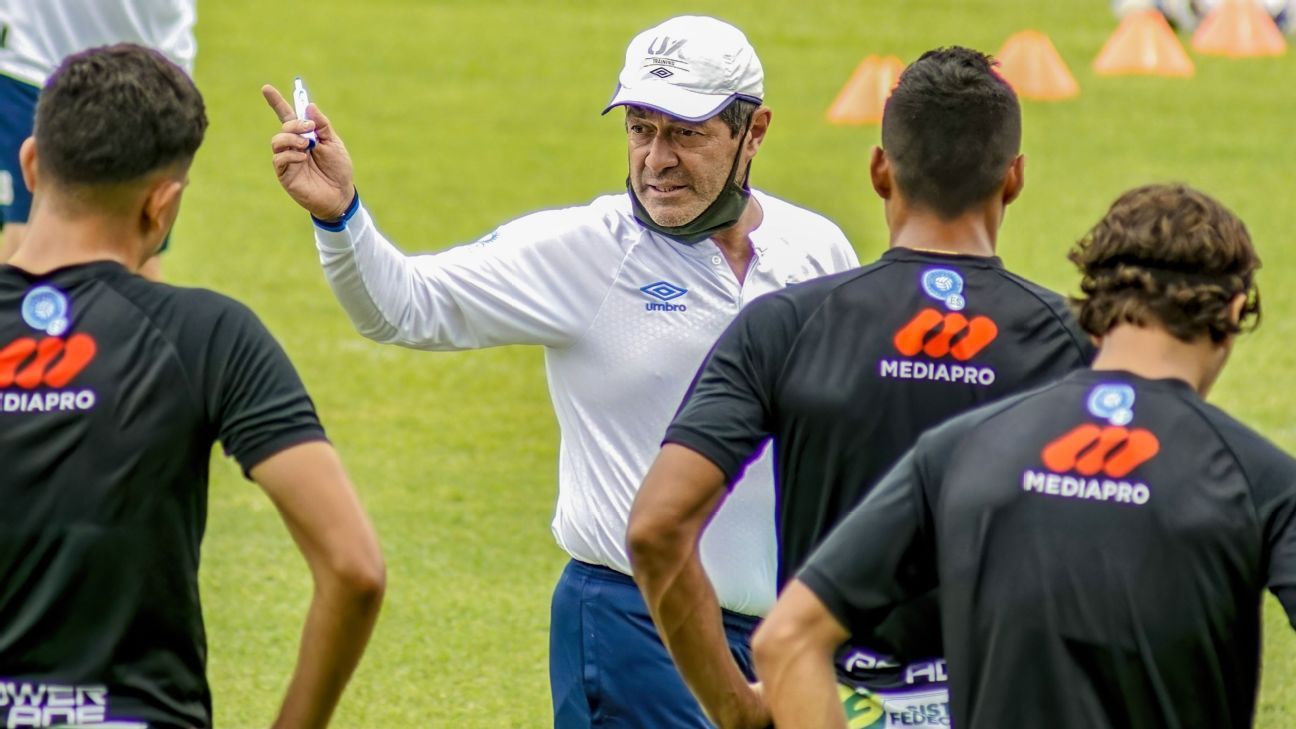 The dark, grainy video harkens back to a different age for the U.S. men’s national team. The jersey numbers can barely be made out, but there is Hugo Perez, nodding home the game’s only goal in a 1989 World Cup qualifier against El Salvador.

It proved to be a critical tally, ultimately setting the stage for the “Shot Heard Round the World” — Paul Caligiuri’s goal against Trinidad & Tobago — that clinched qualification for the 1990 World Cup. It was the first such success for the U.S. men in 40 years, and given that Perez was perhaps the first U.S. playmaker of the modern era, the fact that he scored with his head was a rarity indeed.

“I thought more with my head” than he did scoring with it, he recalled.

On Thursday, Perez will be taking on a very different role when the U.S. opens its World Cup qualifying campaign against El Salvador. The U.S. National Soccer Hall of Famer — who made 73 appearances and scored 13 goals for the U.S. as a player, later working as a coach and scout for the U.S. Soccer Federation — will be managing the Cuscatlecos, hoping to lead the team to just their second victory over the U.S., and first in a World Cup qualifier.

That Perez is coaching against the U.S. instead of for them isn’t quite as odd as it might seem. He has long had a foot in both countries, making him one of the original dual-nationals. He was born in the Salvadoran city of Morazan, but moved to the U.S. for good when he was 11. His playing prowess had him playing semi-professionally at just 14 years of age, and he later signed with the L.A. Aztecs and the Tampa Bay Rowdies of the old North American Soccer League.

Perez’s career later took him to clubs in France, Sweden and Saudi Arabia as well as El Salvador, but it was a snub by the country of his birth — as well as the roster rules in the NASL regarding the use of domestic players — that drove him to get U.S. citizenship and into the arms of the U.S. national team. And his motivation ran deep.

“At that time, in El Salvador, I didn’t get the opportunity to represent them,” he told ESPN. “So when I played against them, I wanted to basically beat them. I wanted to play well against them.”

Weston McKennie says the USMNT’s mentality is to win every game in World Cup qualification.

In addition to his goal in World Cup qualifying, Perez also scored twice against El Salvador during qualifying for the 1988 Olympics. There’s an impulse, then, to think that come Thursday, Perez will be torn in two. During a 2009 interview with ESPN he referred to El Salvador as his “ex-country.” Now he refers to it as “my country” and insists there will be no divided loyalties.

“I’m always grateful to them for giving me the chance to play for them with the national team, and then work for the federation,” he said. “But now I’m in the country that I was born, the country where I grew up with football. … I’m 150, 200 percent with our country now. We need to get our program, again, learning properly. I think that’s one of the goals.

“Whatever I did with the U.S. has nothing to do what I’m doing now in my country.”

There has long been a sense of “What if?” about Perez’s career. This is, after all, a man who was on the cusp of a move to Ajax in 1988, only for work permit issues to scuttle the deal. Later, he was controversially left off the 1990 U.S. World Cup team (though he made the squad in 1994).

The same is true of Perez’s coaching contributions in the U.S. He was manager of the U.S. U-15s from 2012 to ’14, a side that included Christian Pulisic and Tyler Adams. He was hailed then as a coach who played a progressive style and stressed development over results. He encouraged his players to take risks.

“[Perez] loved to play football, and he loved to get the ball on the ground and then play out of the back. That was his style,” Pulisic told ESPN on a recent Zoom call. “I think it was great for us to learn, and helped us a lot technically from a young age. A guy like me, who wasn’t the biggest guy growing up and was very small, and just helping to work on the fundamentals and the passing and thinking ahead and building out of the back, principles like that, it’s just a really good way to start.”

Yet a rift developed between Perez and the USSF, and after two years in the job, they parted ways. Neither side has ever spoken much officially about what led to Perez’s departure. One source with direct knowledge of the situation indicated that Perez’s insistence on adhering to a specific playing style led to some frayed relationships, both with U.S. Development Academy clubs and within U.S. Soccer. When asked about what happened, Perez remained reticent.

“There were things that for me were not correct ,what [the USSF] did,” he said. “But if I explain it to you, step by step, it isn’t going to change. So I decided to just to let it go and keep the good things that I did when I was with them. The rest is history.

“It did [sadden me]. But it’s a business, and the people on the top make mistakes, take decisions. And we are hired to work, but we don’t have any power sometimes to try to do what is right. But at the end, it’s the people upstairs who make those decisions and we have to live with it.”

After his spell with the U.S., Perez was something of a soccer nomad. He did some work for Alianza Futbol, which holds combines for U.S. players in front of scouts from professional clubs. He also did scouting for the Mexico Football Federation, and served as an assistant with El Salvador, as well as managing their U-23 team. In April, following the resignation of Carlos de los Cobos, Perez was hired to manage the senior team.

It’s an assignment not for the faint-hearted. Perez inherited a situation with El Salvador similar to what he experienced as a player with the U.S. — the Cuscatlecos haven’t qualified for the World Cup since the 1982 cycle.

Back in 2013, a match-fixing scandal within the national team resulted in lifetime bans for 14 players, doing immense damage to El Salvador’s program. Perez feels that the ripple effects are still being felt today.

“We lost generations of players,” Perez said. “We lost credibility. We lost sponsorship, so many things. It hurt us a lot.”

But in just four months, Perez has quickly turned the fortunes of the team around. Not only has El Salvador progressed to the final round of qualifying for the first time since the 2010 cycle, but it reached the quarterfinals of the Gold Cup, losing 3-2 to reigning Asian champions Qatar. He has made liberal use of dual-nationals, too, bringing on board the likes of Seattle Sounders defender Alex Roldan (his brother, Cristian, reps the U.S.), Toronto FC defender Eriq Zavaleta and his nephew, Josh Perez, who plays for Miami FC in the second-tier USL Championship.

“He’s building something special in El Salvador. I think he’s built a culture that is ready to win,” said Roldan during last week’s MLS All-Star Game festivities. “I think previously, there wasn’t really a winning mentality there, and I think now we know that we can potentially be beating these big countries like Mexico and the U.S.”

Perez has also implemented a style more in keeping with the culture of the country. Previously, the team tended to use a defend-and-counter strategy as opposed to one of keeping possession and being aggressive, which is seen in the domestic league.

“The technical ability of the average El Salvadoran player is pretty good,” said Zavaleta. “And a team that’s not particularly huge or athletic or physical, it’s difficult for teams to prefer to [defend and counter]. So instead, Perez wants to be on the front foot, and to get some pressure on teams and to try to keep the ball and have some joy with it. If we’re going to lose, we’re going to lose that way.”

So far under Perez, El Salvador hasn’t done much losing, going 6-3-2. But even in their losses – once against Mexico and twice against Qatar – El Salvador has pushed their opponents to the limit, losing by the odd goal on each occasion. Perez’s side hasn’t been afraid to take the initiative.

Perez insists there isn’t a magic formula for El Salvador’s improvement, but it’s also clear his charisma and tactical approach have resonated with the group. He’s also stressed the old traits of hard work, commitment and discipline, and it’s clear that combination has taken the Cuscatlecos a long way.

“We’re not a national team that’s been famous for discipline,” he said. “So we try to instill that little by little, and that has to do with the way we play on the field and the way we behave off it.”

Herculez Gomez compares Christian Pulisic to Landon Donovan as he discusses whether the 22-year-old should be the USMNT’s captain.

Perez isn’t one to get carried away by a single impressive result, and he’s holding to that view regarding Thursday’s match. El Salvador plays five of its first seven matches of the Octagonal at home, meaning it needs to get points now to put it in good position later on. Any result against the U.S. will be a means to that end.

He’s also taking the long view in terms of how to improve the national team program. Perez says the biggest challenge within the Salvadoran player pool is complacency. He wants more players to move to clubs outside the domestic league and hopes that the Salvadoran federation will be on board, especially with the 2026 World Cup being held in North America.

As Perez talked about Thursday’s game, he held fast to downplaying the match-up, but there was a point where some excitement crept out, his competitive drive revealing itself.

“The same feeling or sentiment that I had when I played against El Salvador, it’s the same feeling I’m gonna have when we play the U.S,” he said. “The only difference is I’m not gonna play. I wish I could. When you’re playing against the best, which right now is the U.S., I mean, there’s no more motivation than to win against them.”

Thirty-two years ago, Perez stuck a dagger in El Salvador’s World Cup hopes. Thursday will reveal the extent to which he can make amends.