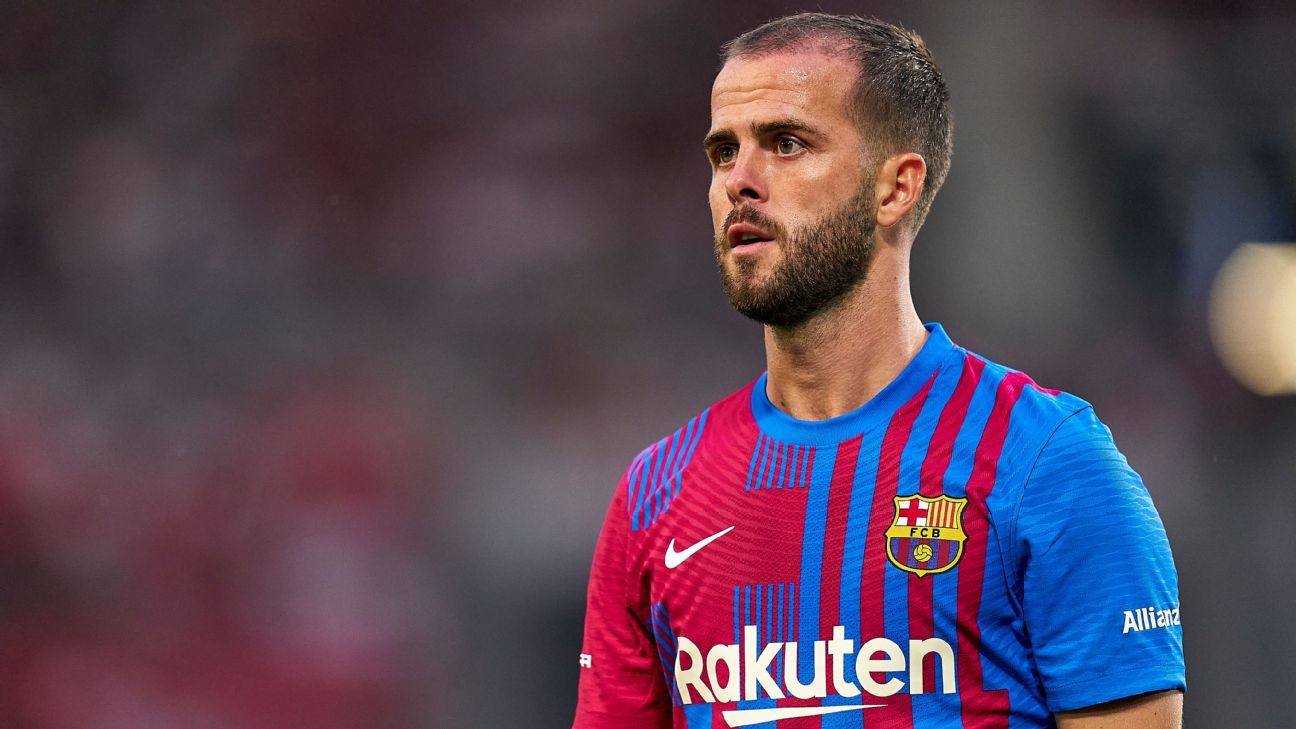 Barcelona are still exploring ways to move on Miralem Pjanic in an attempt to further reduce their wage bill following a hectic summer at Camp Nou, sources have told ESPN.

The transfer window closed in Spain on Tuesday but it remains open in Russia and Turkey, with Zenit St Petersburg one of the clubs linked with Pjanic.

However, sources close to the Bosnia midfielder have told ESPN he is unlikely to agree to a fall-back option given his preference was a return to Italy, where he previously played for Juventus and Roma.

Pjanic, 31, accepts that means he will have to wait until January to secure a move away from Barca, where it’s been made clear he’s not likely to get any playing time under coach Ronald Koeman.

Sources told ESPN that Barca’s priority this summer was to reduce their wage bill. President Joan Laporta previously revealed salaries accounted for 110% of the club’s revenue with Lionel Messi. That dropped to 95% without him.

The departure of Antoine Griezmann, among others, has further helped to bring that down, along with the pay cuts which have been agreed with Gerard Pique, Jordi Alba and Sergio Busquets.

Following those pay cuts and the departures of Messi and Griezmann, Pjanic is now one of the biggest earners at the Catalan club. LaLiga‘s fair play rules dictate that a club’s wage bill should be around 70% of its revenue.

Barca are also still trying to place midfielder Alex Collado at another club, although his salary is much lower than Pjanic’s. The academy graduate saw a deadline day move to Sheffield United fall through.

Youngsters Ansu Fati and Pedri are both out of contract at the end of the season. When the duo signed their current deals, Barca included an option to extend their terms by an additional two years, but as they signed when they were under 18, the club cannot unilaterally execute those extensions.

Therefore, the club will hold talks with both players’ camps about the best way forward in the coming weeks.

Ansu, 18, has just returned to full training after nine months out with a meniscus injury in his knee. He has been handed the No. 10 shirt vacated by Messi and Barca hope to have him back in competitive action by the end of September.

Pedri, also 18, is having some time off back in Tenerife. After competing in Euro 2020 and the Olympic Games this summer, Koeman and Spain coach Luis Enrique both agreed he needed some downtime during the international break.

Barca also need to negotiate a new deal with Ousmane Dembele, who is out injured until November. His terms expire next summer as well.

Spanish FA fury as players push for coach’s exit
U.S. fall to disappointing 2-0 defeat against Japan
Arabic football terms you should know ahead of the World Cup in Qatar
Chelsea chief sacked over ‘inappropriate’ texts
Mexico’s ‘Chucky’ Lozano steps up vs. Peru to give El Tri pre-World Cup boost