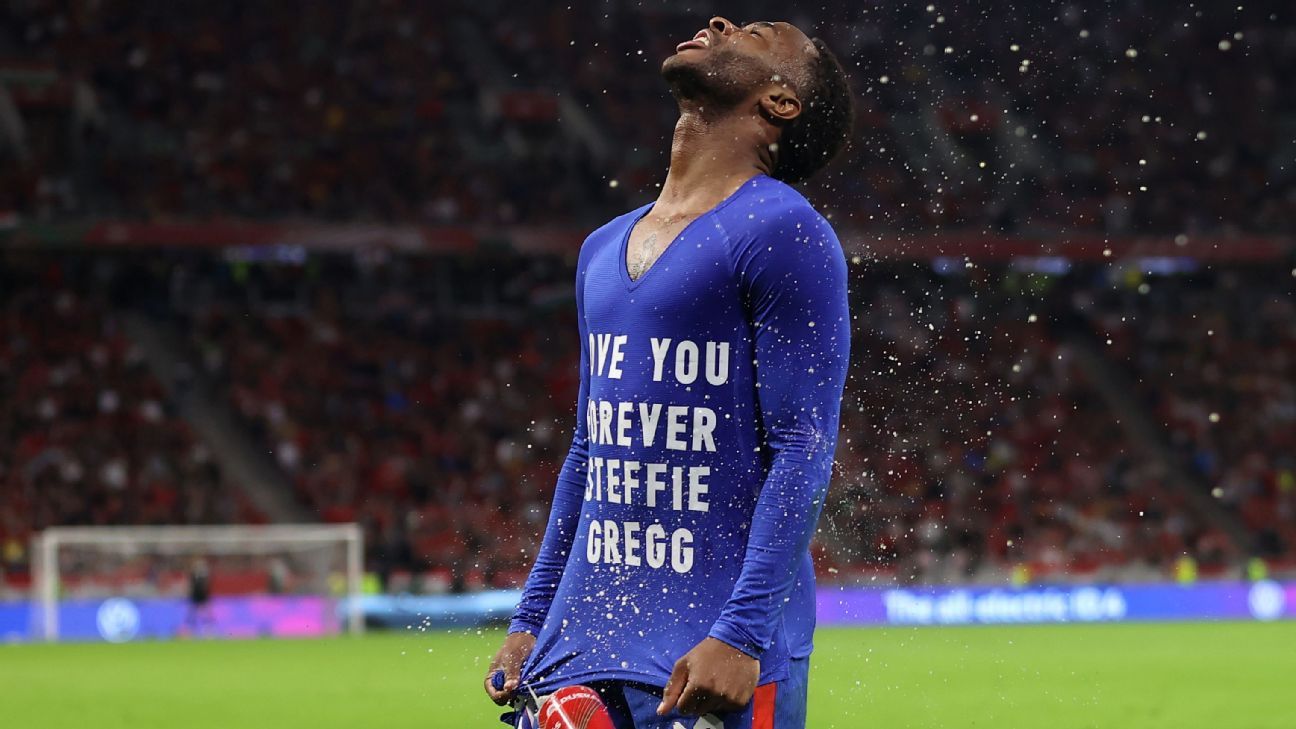 Raheem Sterling is used to leading the way for England on and off the pitch. He shouldn’t have to do so in such ugly circumstances as those witnessed in the Puskas Arena, but one powerful positive from such an unedifying evening is the reminder of what a remarkable talisman the 26-year-old has become.

The sizeable minority came to the Puskas Arena on Thursday to spread fear through hate. They left silenced and bruised by England’s crushing 4-0 win, Hungary‘s heaviest ever home defeat in a World Cup qualifier.

Plenty was made of the hostile atmosphere in Budapest in the build-up. Hungary already have to play their next two UEFA matches behind closed doors after incidents of discrimination during Euro 2020, but this World Cup qualifier against England fell under FIFA’s organisation and so more than 60,000 fans packed into their €533 million stadium to create a raucous atmosphere.

Raucous is one thing, racist is another. The tone was set before kickoff as England’s players were loudly booed for taking a knee, as they’ve done all summer as a means of making a statement against racism.

There has been some debate about how long players would continue with the gesture. The reaction here was evidence of why they will not stop.

England went a long way towards winning the argument during Euro 2020. Their warm-up games in Middlesbrough against Austria and Romania were overshadowed by booing from sections of their own supporters as they took a knee, but that animosity gave way to applause on their run to the final.

But as the team have to start again in a footballing sense following that agonising final defeat to Italy, they had their resolve tested in one of the off-field issues this group have proudly and defiantly tackled under Gareth Southgate’s thoughtful stewardship.

Sterling stands as a proud campaigner for racial equality and allied championing that cause with being England’s best player at the Euros, scoring three crucial goals and driving the team forward with purpose and conviction. After a summer in which he was linked with a move away from Manchester City — possibly as a makeweight in a deal for Tottenham Hotspur ‘s Harry Kane — he picked up that duality of purpose with aplomb here, netting the opening goal 10 minutes into the second half, which sparked England into life.

After a tepid first-half display, the opening goal was the product of an excellent move as Declan Rice won the ball in midfield, Jack Grealish fed the overlapping Mason Mount to pull the ball back for Sterling to finish first-time from seven yards out. Several teammates gathered around Sterling as he was pelted with projectiles from the crowd, including plastic cups, one of which Rice picked up and mimicked drinking from.

Sterling himself was too busy sending another message of his own, a poignant one at that. He took off his shirt to reveal an undergarment with the words “Love you forever Steffie Gregg” written in white letters, in honour of his friend who died recently from COVID-19 aged just 26.

England continued unbowed. Kalvin Phillips won the ball back high up the pitch and suddenly Sterling was in space on the right wing. He saw Kane unmarked and opted to drive a cross in that took a slight deflection off Hungary defender Adam Szalai. Kane reacted first to head home. Harry Maguire met Luke Shaw‘s 69th-minute corner to extend England’s advantage still further, prompting one fan to throw a flare onto the pitch in among more projectiles.

ITV reporter Gabriel Clarke, sat behind the goal England were attacking, then reported incidents of monkey chanting towards Sterling and substitute Jude Bellingham as he warmed up on the touchline. As the Hungary team collapsed, their fans’ behaviour sank lower still.

Rice added a fourth with a tame shot from outside the box that squirmed under goalkeeper Peter Gulacsi to secure a result that takes England into a commanding position in Group I after just four games, holding a five-point lead over Poland and Hungary. That notable achievement, however, was overshadowed as Southgate fielded questions about another shameful night for football off the pitch.

“I’m just getting an understanding of what’s happened because we weren’t really aware of it on the bench,” said the England manager. “So it sounds like there have been some incidents.

“Everybody knows what we stand for as a team and that’s completely unacceptable. Everything has been reported to UEFA and we have to see what happens from there.

“The [players] recognise that the world is changing and although some people are stuck in their ways of thinking and their prejudices, they are going to be the dinosaurs in the end because the world is modernising.

“Hungary isn’t anywhere near as diverse in its population as our country is and so inevitably, it is still taking us a long, long time to get to where we need to get to. And if other countries don’t have the same level of diversity, it is probably not been in their thinking in the same way it has in our country. We will continue to do what we do.”

Southgate’s rhetoric has always contained an element of self-admonishment, mindful of England’s problems closer to home — a concern exacerbated this summer by the crowd trouble that took place at Wembley prior to the Euro 2020 final and the racist abuse three of his own players received online after missing penalties in the ensuing shootout defeat.

Yet he also, regrettably, has had plenty of practice in dealing with this sort of chastening European night. In March 2019, England’s black players were abused as they beat Montenegro 5-1 in Podgorica. Similar scenes overshadowed their 6-0 win in Bulgaria later that year.

Yet on both occasions, England held their nerve on the field to deliver emphatic victories. Sterling scored once against Montenegro, twice against Bulgaria.

He now has 16 goals from his past 24 caps. And it is now 17 goal involvement in his past 12 qualifying matches across the Euros and World Cup.

No matter what is thrown at him, Sterling continues to rise above it all.