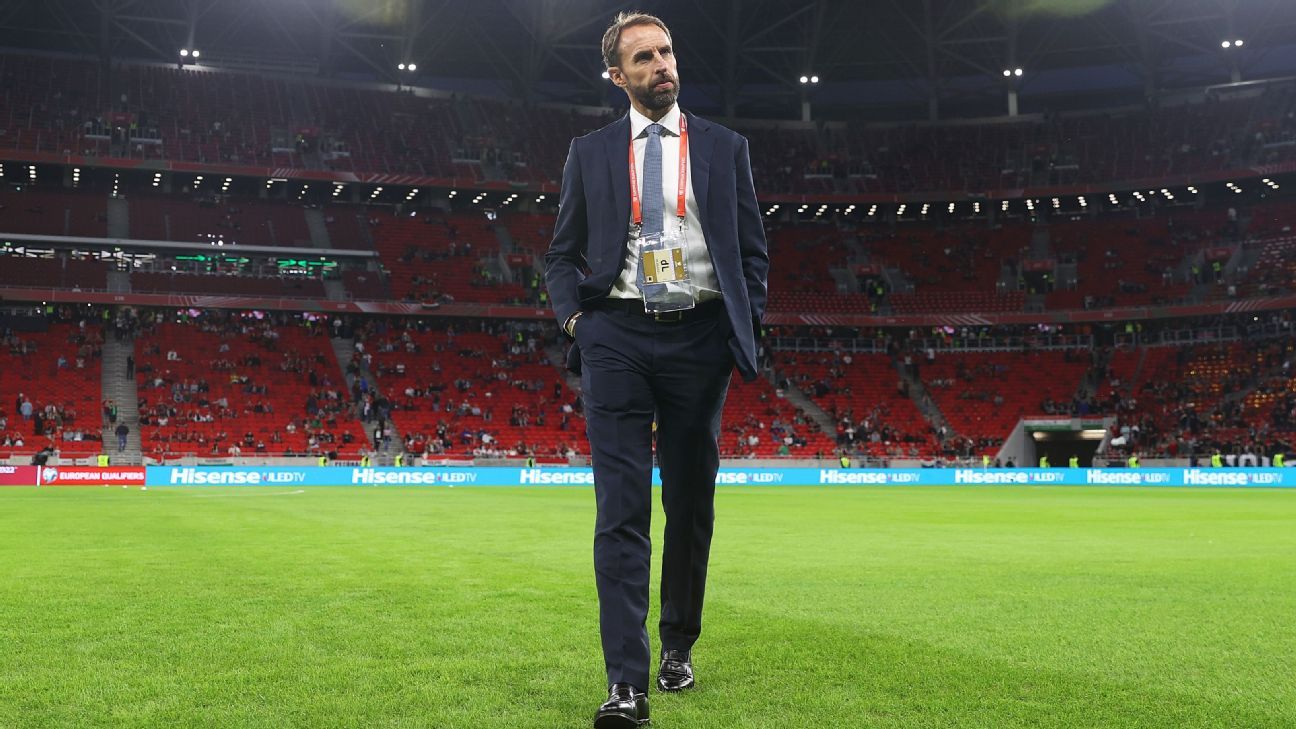 Gareth Southgate has said his England squad “have to keep fighting the battle” on racism as FIFA investigate the ugly scenes which marred Thursday’s 4-0 World Cup qualifier win in Hungary.

Raheem Sterling and unused substitute Jude Bellingham were reportedly targeted with monkey-chanting by a section of the crowd during the second half in the Puskas Arena while projectiles including a flare and plastic cups were thrown at the players.

– Stream ESPN FC Daily on ESPN+ (U.S. only)
– Don’t have ESPN? Get instant access
– World Cup 2022 qualifying: How it works
– Sterling, England rise above whatever abuse thrown at them

England condemned the abuse as “completely unacceptable” before FIFA begun examining the evidence submitted by the Football Association and contained within match reports from officials in the ground.

Southgate has been forced to tackle the issue on a number of occasions including in previous fixtures against Montenegro and Bulgaria as well as in the wake of England’s Euro 2020 final defeat to Italy as Bukayo Saka, Marcus Rashford and Jadon Sancho all received online abuse after missing penalties in the decisive shootout.

But as England prepare to face Andorra at Wembley on Sunday, the 50-year-old told a news conference: “Unfortunately, I don’t know how many camps we have had in the last four years but I seem to have been talking about this subject almost every time we’ve been together.

“I can only reiterate that our players are incredibly mature in the way they deal with it. I think they feel supported by their teammates, which is very important to them. I think their teammates recognise how challenging it must be for our Black players and how disappointing it is in the modern world that we have to keep answering these questions because of the incidents that happen.

“We can only keep taking the stance that we have done and continue to send the right messages to people not only in football but across society and that everybody keeps progressing. We know it is going to take time and it feels slow for everybody but we have to keep fighting that battle.”

Southgate will be without Jadon Sancho after the winger was sent back to Manchester United after picking up a minor knock in training.

However, Leeds striker Patrick Bamford is expected to make his debut in a much-changed team which will also feature Wolves centre-back Conor Coady and Southgate challenged his fringe players to impress.

“Every time we train and work together, there is a level of performance that’s expected amongst us as a group of staff and players,” he added. “We’ve seen that since we got together on Monday. You’ve got to set the standards and there’s got to be a level of focus and humility, I mentioned before the game in Hungary, they are important qualities because it means the talent then comes to the fore.

“That’s what we want every time we select a team that takes to the pitch. We’ve got great trust in all of the squad.

“It is a special moment for him [Bamford] but we want him to do what he does for every week with his club. He has settled in really well with the group.

“He hasn’t had a huge amount of time to train with the group yet but I think he’s got a really clear picture of how we like to play. It is good he was able to watch the team play the other night at close-quarters and get a feel of the expectations. We just want him to go and enjoy his football.”