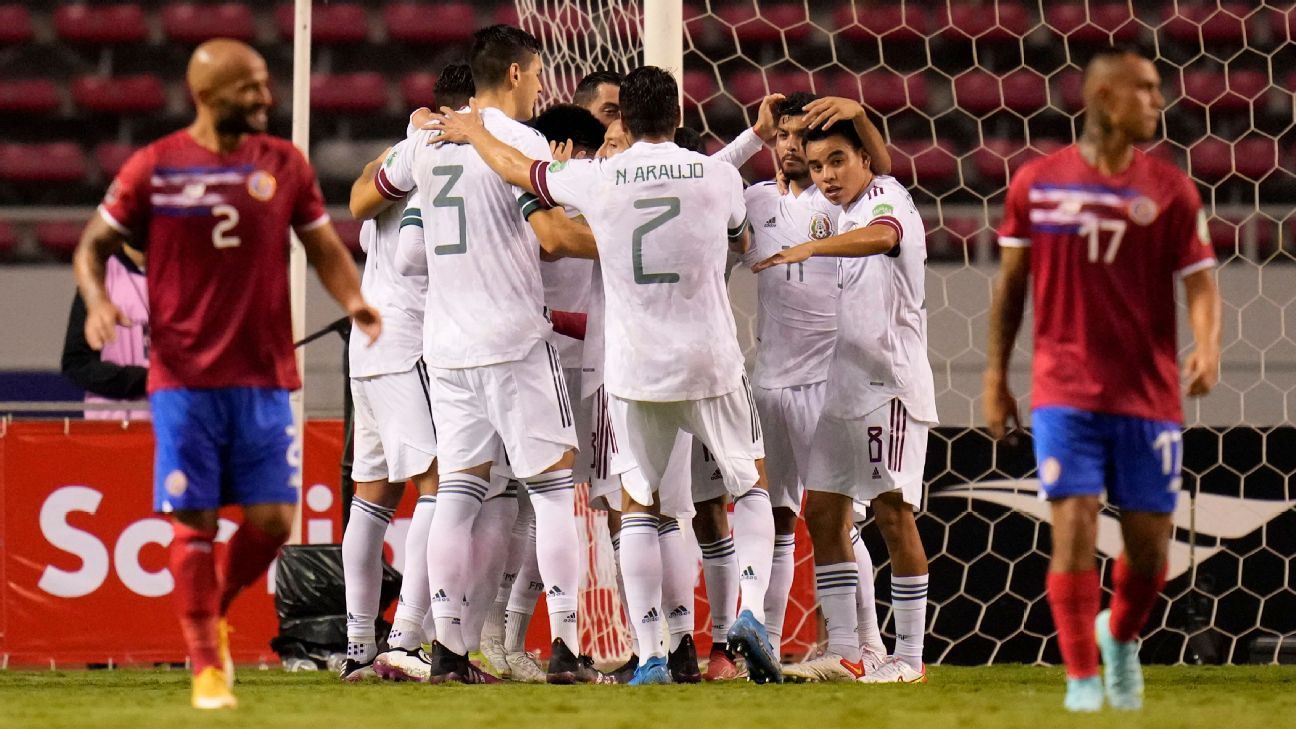 Mexico grabbed a 1-0 victory at Costa Rica in World Cup qualifying on Sunday night, giving El Tri two wins to start off the campaign for the first time since 2005.

After a labored 2-1 victory on Thursday in Mexico City over a short-handed Jamaica, Orbelin Pineda’s penalty kick strike late in the first half was enough give Mexico three points despite a rough, physical showing from Los Ticos.

Without several starters from their last match — as well as their manager Gerardo Martino — Mexico gutted out a victory to remain atop the CONCACAF qualification table after two rounds.

Martino stayed behind following surgery to correct a detached retina, leaving assistant Jorge Theilen to lead the team at the Estadio Nacional.

Costa Rica, on the other hand, looked to build on a draw in their previous match, a 0-0 draw in Panama. Manager Luis Fernando Suarez stoked the ire of several players on the Mexican side after questioning the usefulness of Mexico’s dominance in CONCACAF, historically one of the weakest regions in world football.

“I don’t believe in what some say, that Mexico or the United States are already qualified [when compared to the rest],” Suarez said on Saturday. “Being a giant among little people isn’t worth it.”

In the early going, Suarez’s team attempted to make life difficult for the aforementioned giant by employing a high press and negating El Tri’s favored style of playing out of the back.

Though the pressure yielded a number of turnovers, Costa Rica failed to cash in on any resulting chances. Despite the aggressive stance from the home team, Mexico produced the first clear chance of the match. After 20 minutes, Rogelio Funes Mori jumped on an errant pass in the back and found himself face to face with Keylor Navas.

After a soft, low shot, the Paris Saint-Germain goalkeeper dropped to his right and saved the attempt. Unable to keep the away team from their goal, Costa Rica abandoned the press and continuously sought to exploit the perceived weakness of Julio Cesar Dominguez — a converted central defender — filling in as the right back in place of Jorge Sanchez.

On defense, Los Ticos zeroed in on budding star Alexis Vega. After a superb showing on Thursday against Jamaica, Vega once more created constant danger for Mexico in the early going. Late in the first half, however, the chain of events directly affecting Vega led to the game’s only goal.

In the 38th minute, a brutal tackle from Francisco Calvo saw Vega’s right ankle get caught in the grass. The Chivas man was promptly subbed out in favor of Orbelin Pineda. Before the match ended, Vega was seen on crutches, being transported to a local hospital to receive a formal evaluation of the injury.

Moments after Pineda was subbed on, he would be called upon to take a penalty kick following Bryan Oviedo’s foul of Andres Guardado on the right edge of the 18-yard box.

Guardado hooked the ball past a speeding Ronald Matarrita, forcing Oviedo to employ the contact in order to avoid the Real Betis man from cruising towards Navas. Pineda slotted the penalty kick to Navas’ left to make it 1-0 in the first minute of injury time.

“It was a very tight match,” Pineda said. “We knew they were going to play like this [physically], it was difficult. Unfortunately, Alexis got hurt but anyone on this team who comes off the bench is ready to contribute.”

As is customary during the Martino era, Mexico chose to hang back and employ the counterattack after going ahead on the road.

In the end, possession between both teams was evenly distributed, but Mexico’s defensive unit, spearheaded by Edson Alvarez, Nestor Araujo and Cesar Montes, ensured the majority of Costa Rica’s attacks never required the intervention of goalkeeper Guillermo Ochoa.

In the game’s waning moments, the hosts were unable to capitalize on their lone big chance of the match, sealing their fate.

A long throw-in from Keysher Fuller bounced around in the box long enough for Fuller to reenter the play and, after a favorable carom, launch a shot to Ochoa’s right. The ball hit the bar and bounced away, prompting an eventual clearance from the Mexican back line.

Moments later, referee Ismail Elfath ended the game, leaving Mexico atop the CONCACAF World Cup qualifying table after two games and setting up a game against another undefeated side in Panama.

For now, El Tri can enjoy their best start in a World Cup qualifying campaign in 16 years. After starting the road to the 2006 World Cup with two wins, Mexico eventually stamped its ticket to Germany tied for first place with the United States.

“Our fans and media expect us to win and win big but that’s very hard to do in a qualifying campaign,” said Guardado. “We’re going to Panama with humility and calm, but if we keep doing the things we’re doing we’ll surely have a calm road ahead.”