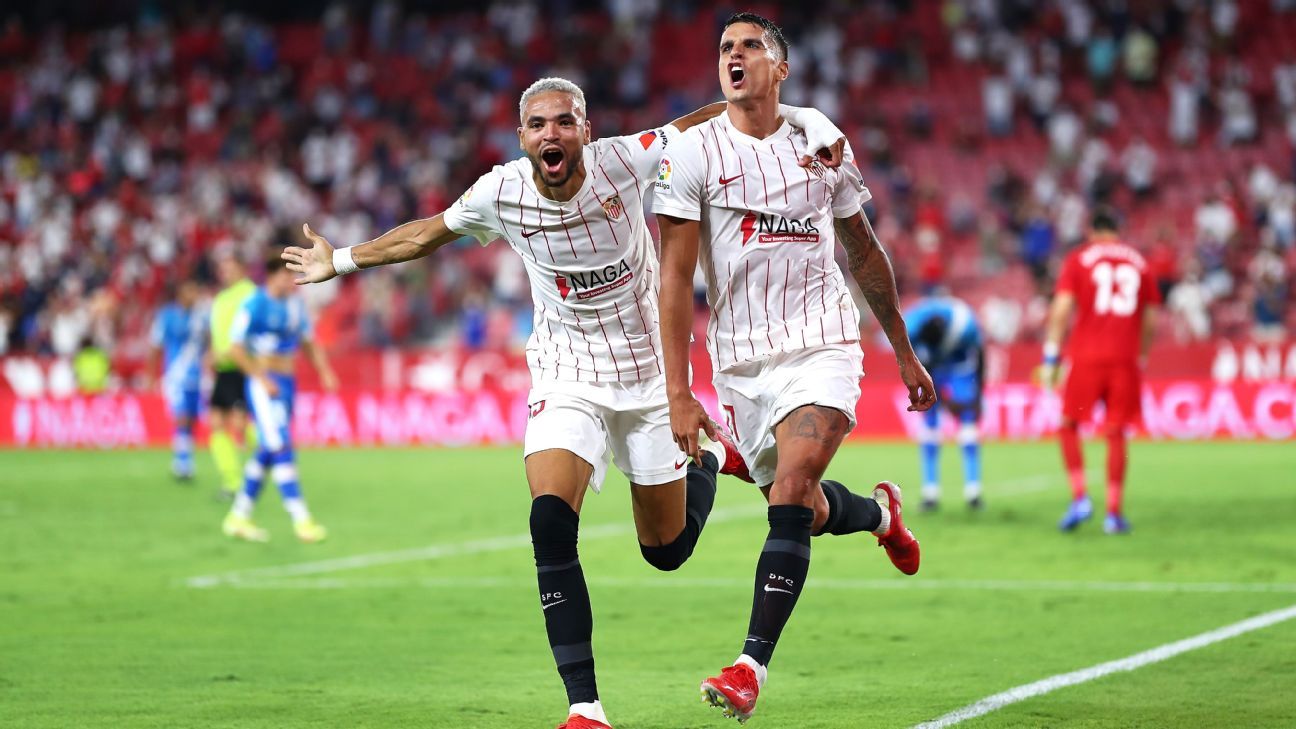 If Sevilla are to become Spain‘s champions for the first time in 76 years, which is feasible, then aside from the obvious goal of registering more points than anyone else, their primary task is to end their status as weaklings in the group of “top four” LaLiga clubs.

Since Julen Lopetegui took over Sevilla have begun to resemble him and, in a sense, his father too.

Lopetegui’s father was a notorious Basque Country strong man. You know the old-school type: in his prime, Jose Antonio Lopetegui had a chest wide enough to play five-a-side football on, muscles on top of muscles, he could lift 100 kilos 22 times in 60 seconds; there’s even a cracking picture of Julen and his behemoth dad in which Jose Antonio is holding each of his two daughters up in the air on the palm of his hands. (That part specifically never caught on as an Olympic event, but after BMX, surfing and skateboarding made the grade in Tokyo, there’s no real reason to suspect that “Daughter Clean and Jerk Free Lift” might not one day.

Sevilla resemble Jose Antonio to the extent that when most teams now run into them, they bounce off worse for the experience. Los Rojiblancos are stern, muscular, stubborn and they don’t like you getting in their way. They resemble Jose Antonio’s boy, Julen, because they are meticulous, relentless and intense: they’re hard to fend off, and quick to bounce back if you do catch them out.

Where Sevilla are puny, perpetually disappointing versions of themselves, however, is against Madrid, Barcelona and Atleti.

Since Lopetegui took over in summer 2019, teaming up with Sevilla’s guru-like Director of Football (and like-minded football obsessive) Monchi, Los Rojiblancos have played the big three a grand total of 14 times. The record would make you green at the gills: Two wins, five draws, seven defeats. In LaLiga, out of a possible 36 points, Lopetegui’s lads have taken…. eight.

It gets worse. In LaLiga, across 1,100 minutes against Madrid, Barcelona and Atleti, Sevilla have scored eight times. In the Copa del Rey, their 2-0 semifinal first-leg win at home against Barca was overturned by a three-goal humiliation at Camp Nou.

Was it a lack of talent? No. A lack of preparation? Forget it — Lopetegui’s one of those managers (like Pep Guardiola, Rafa Benitez and Unai Emery) who believe that if he works hard enough on detail then one day, he’ll be able to predict and pre-programme every single second of a match. Lack of guts? Who can really tell?

This record is so miserable, but there are tiny rays of light. Atleti are reigning champions, and it’s against them that Lopetegui’s dark-horses have fared best, notching two draws and a win. Sevilla’s last two home matches against the rest of the big four — Atleti in the league and Barcelona in the Cup — brought two victories, both without a goal conceded.

As a topic, this is red-hot important for the red-and-whites. It’s the difference between them staying also-rans and being champions.

Last season, Lucas Ocampos, Papu Gomez, Jesus Navas, Youssef En-Nesyri & Co. drew and lost to Barcelona, lost and drew with Madrid and went win/lose with Atleti for a haul of five points. It’s not at all unreasonable to have demanded that they go draw/win against Barcelona, draw/win against Atleti and draw/draw against Madrid. To do that, they’d have only needed to score three more in this elite mini-league and concede four fewer. That would have yielded seven extra points, it would have decreased Atleti’s end of season total by three… and Sevilla would have been Spanish champions by one clear point.

Sevilla were due to play host to Barcelona this Saturday night, due to begin the simple-sounding task of scoring a similar number of points against LaLiga’s “other” teams and taking seven more than they did against the ‘big three’ last season. Yet nothing in Spanish football is ever quite that simple.

When we watched that farce in Sao Paolo this past Sunday, where not only did the right hand not know what the left hand was doing across Brazilian sport and politics, but the left foot was kicking itself in the backside and the right foot was enthusiastically testing the edge of the precipice before someone removed the blindfold, we were watching the fate of Saturday’s Sevilla vs. Barcelona match.

The South American federation, which made a monumental mess of the Copa America this summer, were almost causing a boycott from Brazil‘s players and since saw fit to order their international teams to play three World Cup qualifying matches in eight days specifically so that the players — the real attraction — can’t get back in time for their club matches, thereby squashing that brilliant match at the Estadio Sanchez Pizjuan. It was partly because three key Sevilla players (Acuna, Papu Gomez and Gonzalo Montiel) wouldn’t be back in time for the contest (nor would Barcelona’s Araujo) that LaLiga wanted the match postponed.

Rather incredibly, until you consider that almost no-one in power cares a hoot whether we are about to squeeze the creative and physical juices out of our wonderful football players until they wither, the Spanish Federation wanted the game to go ahead. The dispute went to a Spanish Government committee and, hallelujah, some duty of care about the clubs and the players won the argument: both Sevilla vs. Barcelona and Villarreal vs. Alaves (for the same reason) were postponed.

Just in case anyone thought that the matches might simply be held back a day and played Sunday, don’t forget that Sevilla and Villarreal have hugely important — and financially lucrative — Champions League matches to play on Tuesday. They should never be asked to play hugely significant LaLiga contests late on Sunday night and then, 48 hours later, compete against the cream of Europe.

Doctors, physios and the players’ union all conclude (in one of the few subjects where there’s unity and harmony of voice) that the minimum (I repeat minimum) recuperation time for elite footballers is 72 hours between matches. Again, this being Spain, at the time of writing there was still an opportunity for the Spanish FA to appeal the decision. If they do, I’ll despair of how even a bitter, non-stop feud between the League and the FA can reach the depths of ignoring player welfare completely.

Anyway, a few important issues spill out of the match postponement.

Sevilla haven’t been playing with much of a spark yet this season, and it’s feasible to argue that, purely in terms of how likely they are to get a win over a Messi-less Barcelona, postponement might be a boon. I know that they’d have played the match without their three Argentinians if they’d been ordered to, but let’s look at the possible re-schedule dates.

Julien Laurens questions why Barcelona look set to improve a direct rival with nothing in return for Antoine Griezmann.

It’s feasible that a special midweek slate of fixtures, for Sevilla, Barcelona, Villarreal and Alaves, could be scheduled for the midweek after Spain play their UEFA Nations League semifinal against Italy in Milan. That would mean around October 13-14, and purely from Sevilla’s point of view, let’s weigh that up.

Right now, off the back of international matches when key players often come back drained or “not in the zone,” they were about to face Barcelona, RB Salzburg in the Champions League, Real Sociedad away and then Valencia at home. Strip Barca out of that and the little “racha” (run) of matches looks a little more digestible. On those October dates, Sevilla would be enjoying a run of Granada away, Barcelona at home, Celta away, Lille away and Levante at home — much, much more appetising overall.

I wonder whether fate just gave Sevilla a little nudge in the ribs. After all, the meetings between Sevilla and Barcelona do have some historic antecedents. Back in 2003, an argument over releasing international players (at the time, Dutch footballers from Barca) led to President Joan Laporta scheduling the match at 12:05 a.m. on Sept. 3 just to stick two fingers up at everyone: the League, UEFA, FIFA, you name it. In the end, Ronaldinho thrashed in his first goal for Barcelona, the late Jose Antonio Reyes scored for Sevilla and honours were shared.

They were also shared on the last day of the 1945-46 season. On March 31, after a season when LaLiga only consisted of 26 matches, Sevilla drew 1-1 with Barcelona to conserve their single-point lead and become Spanish champions, the last time they claimed the title. In that title-winning season, Sevilla drew and lost to Barcelona, won and drew against Atleti, and drew and won against Madrid, taking seven points out of a possible 12.

The evidence is there. If Lopetegui can transform his under-performers into strongmen against the “big three” this season, there’s every reason to think Sevilla will be champions. And messy though it’s been, they might just have been given a wee helping hand by the embarrassment4 that is international football.