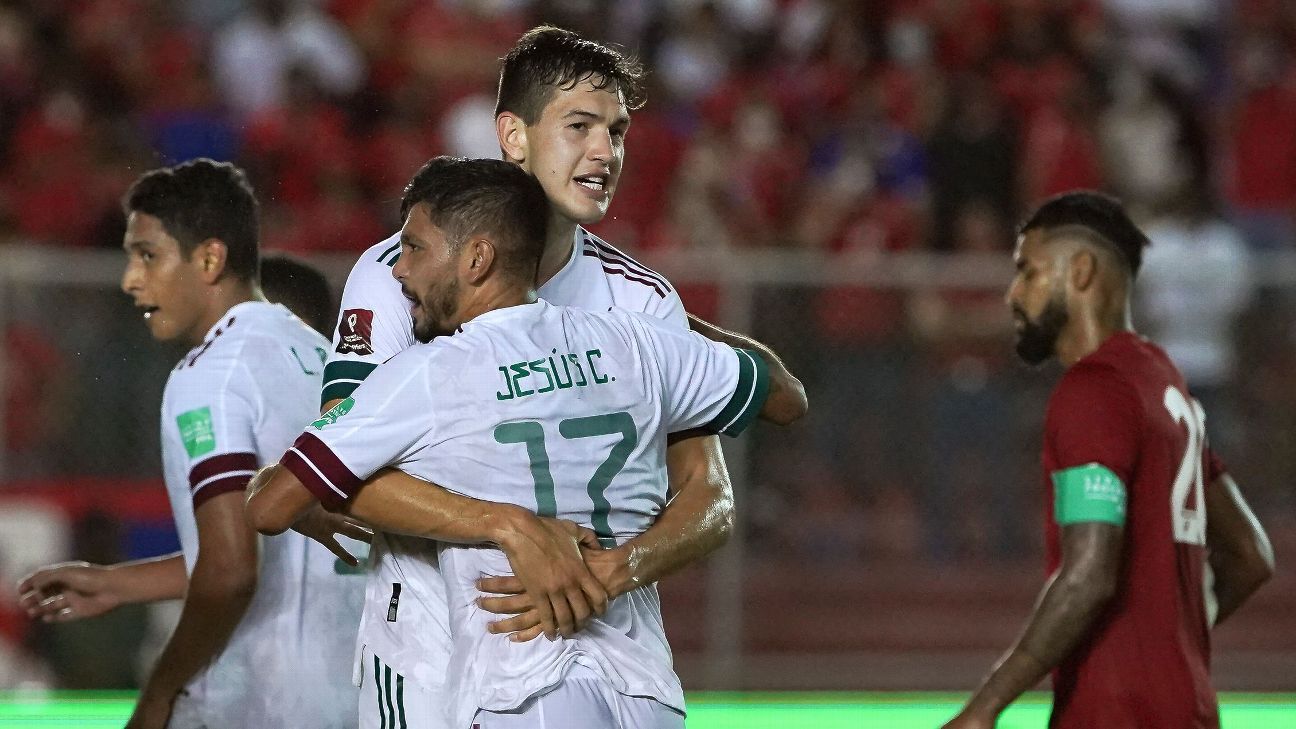 Despite not having their two best attackers for the first three games of World Cup qualifying, El Tri mounted a comeback after falling behind for the first time in the qualifying round, as Jesus Corona leveled for Mexico following Rolando Blackburn’s opener for the hosts.

Without forwards Raul Jimenez and Hirving Lozano for the entire international window, Mexico manager Gerardo Martino — who remained back as he recovered from an eye surgery — has relied on a rotating cast of attackers. Alexis Vega — himself a key part of El Tri‘s front line for the first two games — was unavailable to play due to an ankle sprain. In his place, Orbelin Pineda stepped in to play with Corona and Rogelio Funes Mori up front.

Meanwhile, Panama coach Thomas Christiansen went with the same 11 players for the third match in just seven days, hoping to prolong the team’s undefeated start after a scoreless draw against Costa Rica and a 3-0 win over Jamaica.

The gamble appeared to backfire after just seven minutes, when Adal Carrasquilla pulled up with an apparent muscle injury, prompting the game’s first substitution. Despite the fitness risk, Panama dominated the early going, forcing saves from Mexico goalkeeper Guillermo Ochoa and holding the majority of possession.

Aside from the missing players on offense, Mexico was without defensive midfielder Edson Alvarez after yellow card accumulation, leaving a midfield of Luis Romo, Jonathan dos Santos and Carlos Rodriguez to deal with the Panamanian attack.

Unable to force turnovers, Mexico allowed a series of long possessions that eventually yielded the game’s first goal. A string of passes eventually led to a ground cross on the right side, prompting a weak punch from Ochoa and putting the ball directly in the path of Blackburn, who slotted his shot into the net at the 27th minute.

“Mexico plans to win all its games,” said Mexico assistant coach Jorge Theiler, filling in for Martino. “But you don’t always have things the way you want them. The other team always comes into play.”

Though Mexico’s defending shored up in the aftermath, little progress was made in mounting dangerous attacks for their attempt to pull even. At halftime, Mexico’s coaching staff pulled the trigger on three subs, bringing on Sebastian Cordova and Andres Guardado in place of Rodriguez and Dos Santos in the midfield, and subbing in Henry Martin for the underwhelming Funes Mori in attack.

In the 75th minute, it was a Guardado cross that found Cordova in the box. Cordova’s header promptly beat goalkeeper Luis Mejia, but struck the post. The rebound found Corona, who maneuvered past a defender and coolly put the ball past Mejia for the equalizer.

“Perhaps I need to score more, and generate more chances, but I’m happy with the result [tonight],” said Corona. “I didn’t expect [Mexico to start this well], we have a lot of missing players, but we showed we’re ready for this.”

Following the equalizer, Mexico kept the pressure on Panama, threatening to go ahead a number of times but falling short on the final touch. Christiansen took striker Edgar Barcenas off for Alfredo Stephens in an attempt to give his attack freshness and force Mexico to take fewer risks in the back. The gambit worked, and El Tri gave up lost momentum in the game’s final moments.

Mexico leads the eight-team Octagonal table with seven points, followed by Panama, Canada and the U.S. with five each. Honduras and El Salvador have two each, Costa Rica has one point, and Jamaica none. The top three sides will qualify for the World Cup in 2022, while the fourth-placed team will enter a playoff for a spot in Qatar.

“Out of nine possible points, we have seven; I think what we showed in the first two games was good, and tonight, we saw a more balanced match,” said Theiler.

Next month, El Tri will host Canada and Honduras and go on the road to El Salvador, hoping to do so with the likes of Jimenez, Lozano and Vega in tow.

“The qualifying campaign will be difficult until the very end,” said Theiler. “But when we play the way Gerardo Martino wants us to play, the result will always be positive.”