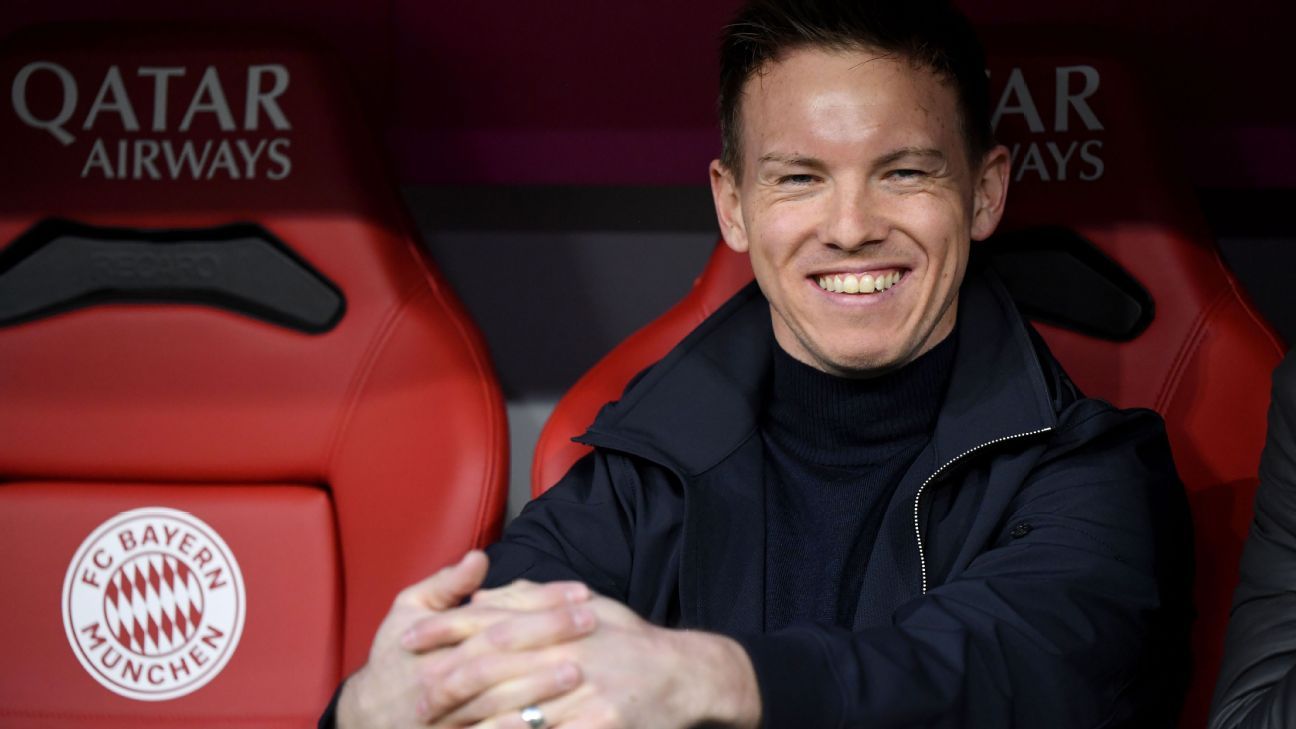 RB Leipzig are familiar with Bayern Munich, their opponents on Saturday (12:20 p.m. ET, stream live on ESPN+), and not just in the sense of competing in the same league. Defender Dayot Upamecano and playmaker Marcel Sabitzer both left Leipzig for Bayern in the offseason, as did their former manager, Julian Nagelsmann. He’ll be there on the sidelines of his old stomping ground — the Red Bull Arena — looking to break his ex’s heart.

The summer migration of the Bundesliga‘s greatest talent to the best team is nothing new. Robert Lewandowski joined Bayern on a free transfer from Borussia Dortmund, Leon Goretzka arrived from Schalke, and Niklas Sule was picked up from TSG Hoffenheim. But for those Leipzig players who’ve started their annual Sisyphean task of toppling Bayern — a team chasing their 10th successive Bundesliga title — this past summer has been especially grating.

“Nothing — nothing — gets me angrier than the fact that all the German clubs just sell to them,” United States captain Tyler Adams and Leipzig midfielder told the Athletic earlier this month. “It boggles my mind, man. It really does suck.”

Adams’ club manager, Jesse Marsch — who replaced Nagelsmann in Leipzig — told ESPN that he admired “incredible” Bayern Munich for their relentlessness in the Bundesliga and their ability to “strategically cannibalise the league and find a way to take from the strong.”

This isn’t criticism; it’s respect for how they’ve managed to stay ahead, even though this story is now nearly a decade old. And more to the point: When will someone else get to write a chapter?

Challengers have come and gone. The past three seasons saw Borussia Dortmund and RB Leipzig cemented as the sternest dangers to Bayern’s hegemony. But there’s a growing feeling within German football after a summer transfer window in which they lost some key personnel such as central defenders David Alaba and Jerome Boateng that this could be the ideal season to loosen Bayern’s grip.

Although we’re entering only matchday four in the 38-game season, this weekend’s contest in Leipzig gives us a valuable sign of how the rest of the campaign could pan out. While the main plot come Saturday will be around whether Leipzig can land an early blow in the title race, there are neat subplots — in particular, the juxtaposition of the two managers, Marsch and Nagelsmann, seeking to escape the hefty shadows of their predecessors and start moulding their own teams.

It was July 7 and Nagelsmann was nervous. It was his first day at Bayern Munich. He faced his squad for the first time at training ground Sabener Strasse, and saw a group who had multiple Bundesliga titles between them. While he talked through his expectations and plans, he’d asked his staff to watch their body language and pick up on how they reacted to Nagelsmann’s first speech.

“I talked about the things we want to see on the pitch in the future and about their aims,” Nagelsmann told ESPN. “I asked [my staff] for feedback, and they said they thought it went well. I hope they were serious and that they do not lie! But at the end, I think our performance on the pitch … when you see the last games were good. I think to be nervous is normal, but you have to talk about your topics and try to stay focused.”

When Nagelsmann took over struggling Hoffenheim in 2016, he had a system in mind to get them out of trouble and shoehorned the available players into his tactics. At Bayern, it’s different.

“I think fast, attacking soccer would be a good way to describe my philosophy,” Nagelsmann said. “The individual player is more important than the system. If you train a world-class team, it’s always about that.”

Nagelsmann feels he has the right balance of experience in his squad: He has youngsters such as Jamal Musiala, players reaching their peak such as Joshua Kimmich and Leroy Sane, and older heads in Manuel Neuer and Robert Lewandowski. Sane has struggled this season, and was even booed by some of the home support against FC Cologne, but Nagelsmann feels the key to unlocking his potential is “to work with him and not to talk about him.”

Nagelsmann adds: “I think the perfect plan is to not have 100 face-to-face meetings. I think the most important topic is to show him things where he’s very good and to show and discuss things he should avoid in the future.”

While Sane will be used more in his preferred spot on the left wing against Leipzig, Nagelsmann’s challenge with Lewandowski is to maintain his incredible goal-scoring run. “You always want to [push them to be] a better player, but I think if he could hold his level, I’m really, really happy,” Nagelsmann said.

Lewandowski has already started the season with five goals in three games, helping Bayern get their campaign off on a promising note after a shaky run of friendlies in which they lost to Borussia Monchengladbach and Napoli, and drew with Ajax Amsterdam. But this is a team still in transition.

First-choice centre-backs Alaba and Boateng both left on free transfers, as did experienced midfielder Javi Martinez, and after a disjointed preseason in which several of their international stars arrived late to training after Euro 2020, Bayern and Nagelsmann are still fine-tuning their identity. Having recruited Upamecano and Sabitzer over the summer — players who know Nagelsmann’s philosophy well — and added further youth in Omar Richards from Reading, Nagelsmann’s squad is still gelling.

“We know that we could not spend the same money like PSG or like Manchester or the other clubs, so we try to be very creative,” Nagelsmann said. “And I think there’s also a big chance to be creative and to work with young players, try to develop them. It’s very interesting. It’s an interesting job. It’s also interesting to work with world-class players who won every title, but I love to play with young players who are hungry and try to win every title in the future.”

Leipzig head into Saturday’s game mired in midtable, with Marsch’s team still adjusting, too. The offseason departures of their instrumental midfield Sabitzer and both first-choice central defenders Upamecano and Ibrahima Konate (to Liverpool for £36 million) is the equivalent of starting a game of chess without your queen and both knights. He had to navigate this at his old job at FC Salzburg, too, where the bigger fish swooped for players like Erling Haaland and Takumi Minamino.

The Wisconsin-born Marsch is from the Red Bull school (having managed New York Red Bulls, Salzburg and previously served as an assistant at Leipzig under Ralf Rangnick), and knows a huge part of his brief is to develop young players, but he is putting his own mark on the Bundesliga side: marrying relentless pressing with attack.

“I think I’m aggressive by nature, right, sometimes recklessly,” Marsch told ESPN. “And I think it kind of fits the way we think about football. I like to be around young players, I find that they’re naturally aggressive. I feel like they are ambitious.”

They’ve made a mixed start to the 2021-22 campaign with a 4-0 win over VfB Stuttgart on matchday two sandwiched between 1-0 defeats to Mainz and VfL Wolfsburg. “We’ve had a little bit of a tough start here, but I can actually say from what I was hoping we would achieve on a daily basis, we’re actually ahead of schedule from where I hoped we would be,” Marsch said.

Dominik Szoboszlai has made his long-awaited debut after a lengthy groin injury, new signings such as Andre Silva, Mohamed Simakan and Josko Gvardiol have featured prominently, while Marsch will give youngsters Brian Brobbey and Ilaix Moriba time to settle. So while he’s steadily introducing the new faces, Marsch knows they’ll have to be at their best if they are to land an early blow on Bayern Munich.

Just don’t expect them to cower when the champions come to town.

“We will go after them,” Marsch said. “That’s one of the big challenges here in Leipzig is finding ways to beat the biggest opponents, right?”

Leipzig’s record makes for grim reading with just one win in 10 in the Bundesliga against Bayern and two in 10 against Dortmund.

“We need to continue building a fearless mentality in the club, while also, knowing what it takes on the pitch tactically to still find ways to find advantages against the best team,” Marsch said. “[Nagelsmann] knows our team very well, we know them very well. It will be a big challenge, a result that we could really use to gain momentum. Our guys know what Bayern are about, they understand what we’re about. And it’ll be about who’s ready on the day to do whatever it takes to find a way to get the result.”

Nagelsmann will also want to land a statement win early in his tenure. He will park any sentimentality and throw all his inside information in a bid to scupper his former side’s hopes. He has that Bundesliga title in his sights and knows full well the expectation surrounding Bayern Munich.

Southgate ready for flak after England relegation
USSF hires J.T. Batson as CEO, secretary general
Are Gerrard and Lampard the only options for next England manager?
England suffer NL relegation after Italy loss
Can Barca overcome injury crisis ahead of UCL and Clasico?