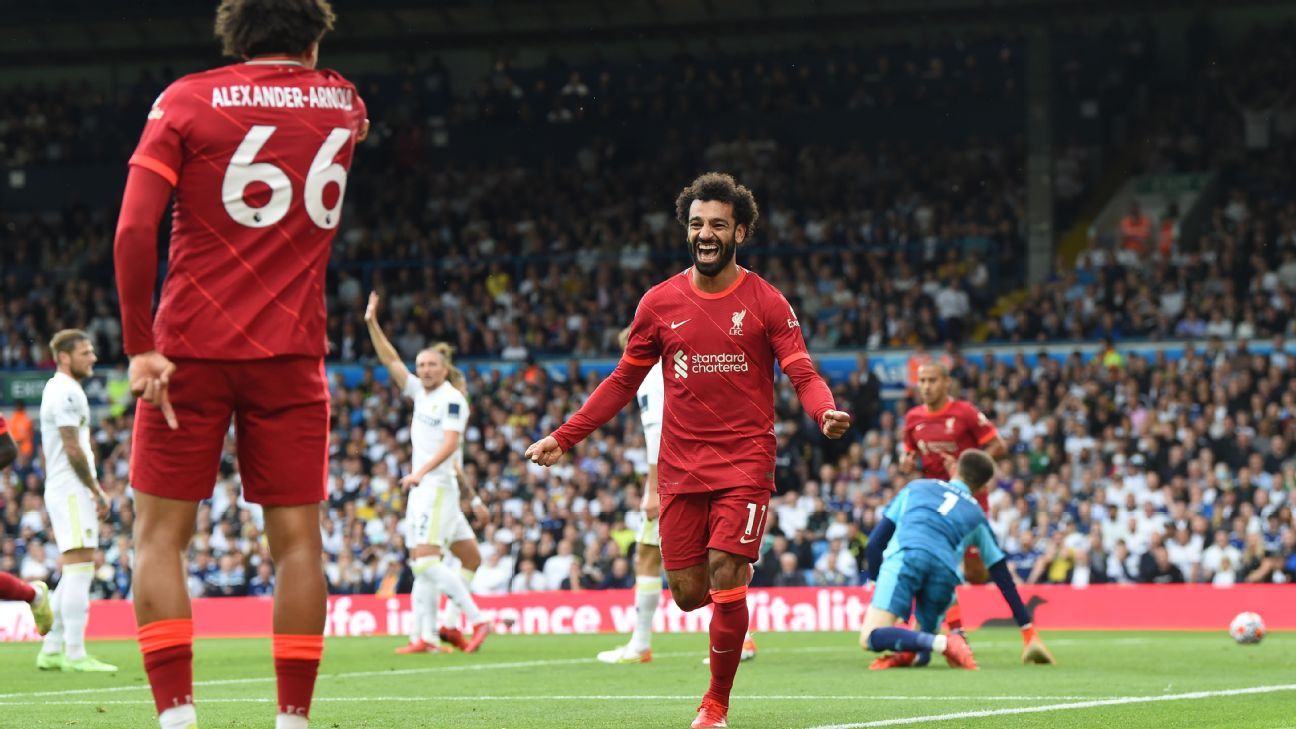 Goals from Fabinho and Sadio Mane made it a comfortable win for Liverpool but it was tainted after Pascal Struijk was sent off for a challenge on Harvey Elliott which required him to be stretchered from the pitch.

“We were not in charge very often in the game. They were superior to us in all aspects,” Leeds coach Marcelo Bielsa said after the game.

“I don’t know why. I need to know what reasons are. When we lost the ball they created danger. Of course it worries me that we lost 3-0.”

Salah became the fifth-fastest player to reach 100 goals when he exchanged passes with Joel Matip and Trent Alexander-Arnold before burying the ball in the net after 20 minutes.

His 100 goals came in 162 league appearances. Alan Shearer holds the record for reaching it after 124 appearances.

“Mo’s record is crazy,” Jurgen Klopp said. “He is still hungry and I don’t know how many records he can break.

“Since he joined us he has been the perfect player — a top class player.”

Liverpool got their second five minutes into the second half when Virgil Van Dijk‘s header bounced off Patrick Bamford and into Fabinho’s path. After a second attempt he got it in the net and after a VAR check for offside the goal was allowed.

Things took a serious turn on 60 minutes when Elliot went down under a heavy challenge from Struijk. Physios appeared on the pitch before play had stopped and Salah looked visibly upset after the foul.

Struijk was sent off and Elliott was stretchered from the field.

“I couldn’t care less [if it was a red card], it is not my business. It is a serious injury, definitely for an 18-year-old boy. The red card is not important. Two or three weeks we can play on, Harvey will not,” Klopp said.

“We played a really good game until Harvey had to go, the whole team was shocked and we lost rhythm. That is normal, human. We played as good as we can against Leeds. You have to be ready for brutal intensity. The crowd was there and an exciting football game with us as the deserved winner.

“I spoke to the boys afterwards, we have to speak a little bit about the football but Harvey overshadows it.”

Dan James, who joined Leeds from Manchester United at the end of the summer transfer window, made his debut for the club on 68 minutes.

The injury to Elliott meant there were eight minutes added time which gave Mane the opportunity to add Liverpool’s third.

“I regret dearly the opponent was injured and I’m 100% certain our player did not have a bad intention. I wish it had not happened,” Bielsa said.

Thiago Alcantara squared the ball to Mane in the centre of the box and he slid it under Illan Meslier and into the net three minutes into stoppage time.

The result means Leeds have yet to register a win this season with two draws and two losses under their belts.

“They had a fair few chances, but we had some too. They deserved to win and we were careless today with the ball. Against a team like that, you get punished,” Bamford said.

“We haven’t played up to our potential in the first four games, but we’ll keep working hard. We’ve got to look to the next game.”