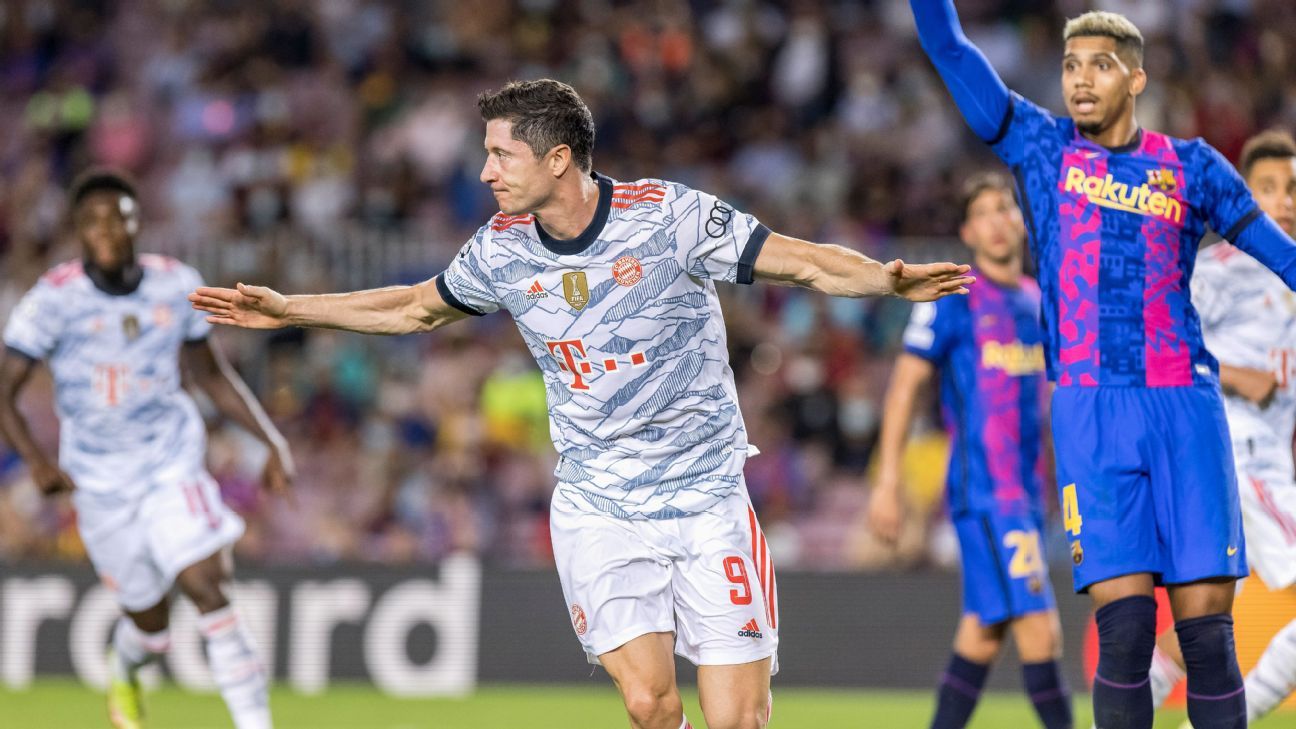 Two goals from Robert Lewandowski and one from Thomas Muller propelled Bayern Munich to a 3-0 win at Barcelona in their opening Champions League game on Tuesday in another brutal demonstration of the gulf in class between the two sides.

Muller gave Bayern the lead in the 34th minute with a strike from outside the area which deflected off Barca defender Eric Garcia to confound goalkeeper Marc-Andre ter Stegen.

Lewandowski struck the German champions’ second in the 54th, tapping into the net from close range on the rebound after Jamal Musiala had hit the post as Bayern made a rampant start following the interval, hemming their hosts into their own half.

– Marcotti: This version of Barca had little chance vs. Bayern

The Polish striker twisted the knife further into Barcelona by scoring again in the 85th, collecting the ball in the area after another shot had come back off the post and tormenting the defence before calmly beating Ter Stegen in the Group E clash.

The scoreline was not quite as damning for Barca as the 8-2 drubbing Bayern gave them in the quarterfinals two seasons ago but the performance was just as hopeless as they were routinely dispossessed and struggled to cope with the visitors’ intensity.

Barca made a promising start in their first Champions League game in front of supporters at the Camp Nou since December 2019, although while the crowd was limited to 40,000 due to coronavirus restrictions there were fewer fans in attendance owing to a lack of appetite for the post-Lionel Messi era.

But Bayern soon showed their superiority and it took a strong hand from Ter Stegen to prevent Leroy Sane giving the Germans the lead, while Gerard Pique had to slide across the ground to block a goal-bound strike from Musiala.

Barcelona’s only real attempt on goal in the first half came from a free kick, defender Ronald Araujo meeting Memphis Depay‘s cross and heading just over the bar.

Bayern finally took the lead their play merited through Muller, who scored twice in the 8-2 hammering of Barca in Lisbon and has now netted seven times against the Catalans in Europe’s top competition.

Loud boos could be heard at halftime but things got more desperate for the hosts after the break and by the end of the game Barca fans were sarcastically applauding the team whenever they managed to recover the ball, resigned to their fate.

Barcelona coach Koeman said the gulf in talent on the field was apparent and pointed out that his side was playing without injured stars like Sergio Aguero, Ousmane Dembele, and Ansu Fati.

“I can’t complain about the team’s attitude, but there’s a quality difference. One team that have played together for a long time [against] us, with a lot of young players who in two, three years will be better. It’s really difficult to accept, but we hope to improve things and to get people back from injuries.

There are players aged 19, 20. If you compare that with what Bayern have, it’s a huge difference. The difference will get smaller in time.”

With Camp Nou at 40% capacity, the fans took out their frustration on Sergi Roberto, who had a less than memorable performance playing out of position at right full-back and substituted off in the 60th minute.

“Bayern are really solid and we are what we are. It is what it is. At the end, we had a lot of kids on. We’re Barca and I don’t want to make excuses, though. We will see at the end of the season,” Barca captain Pique said after the match.

“It hurts me a lot personally because I know him as a person, he’s a great human being and loves this club more than anything. I would like to remind people he’s not a full-back, either, and he’s making a huge sacrifice by playing there. It hurts a lot,” Pique said of his teammate.

Koeman also came to the defense of Roberto, saying: “I never like fans whistling a player. All the players have tried to give everything.

“The only thing is Sergi was playing in a position, if all players available, he would not play that position. To play further forward on the wing, have to be good one on one, quick … he’s another type of player.”