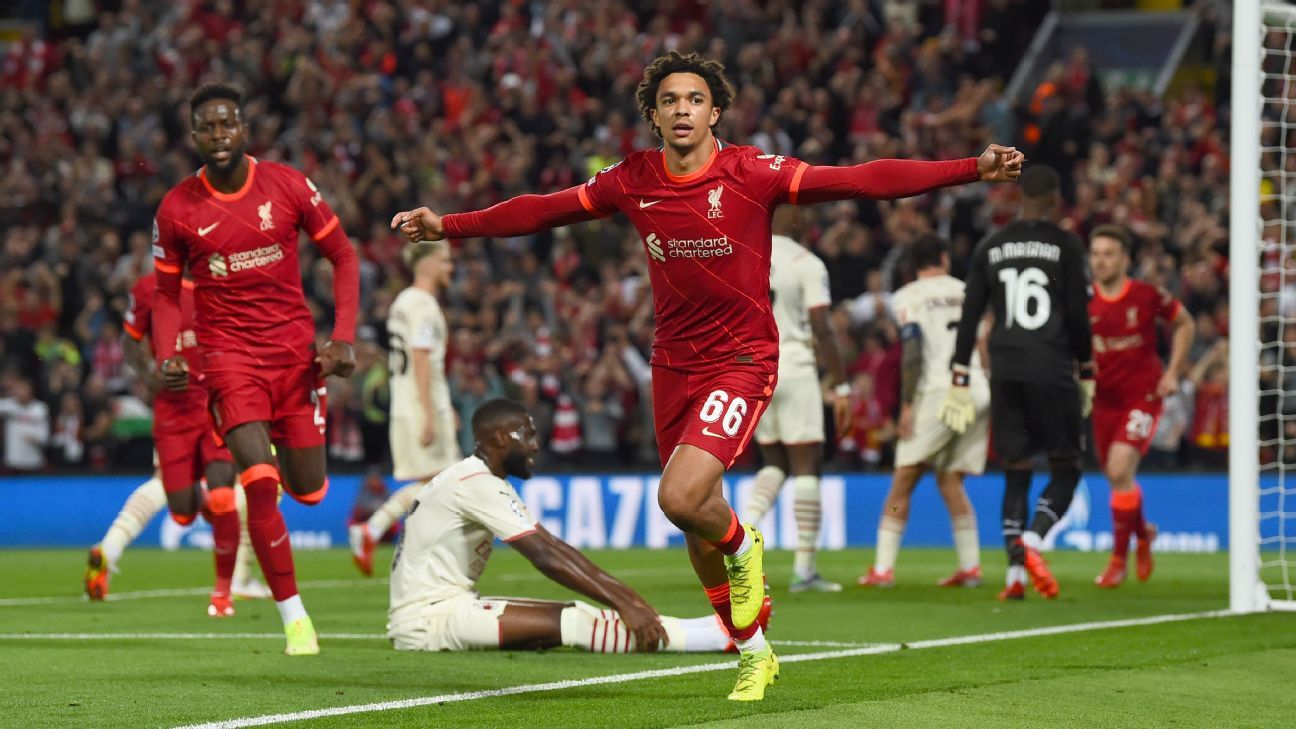 You only have to mention the Liverpool defender’s name to spark an avalanche of opinion about the strengths and weaknesses — and best position — of the world’s best right-back, or most overrated, depending on your point of view. And Liverpool’s 3-2 win against AC Milan in their Champions League group-stage opener was the night when he gave both sides all the proof they needed to support their argument.

Alexander-Arnold had some great moments, including a goalbound shot deflected off Fikayo Tomori for Liverpool’s opening goal, and he had some bad ones, when he switched off to enable Milan to score twice in quick succession before half-time. One minute he was tearing down the right, causing having for the Milan defenders, but the next he was sprinting to get back into position as the Italians repeatedly found space down their left with Alexander-Arnold chasing shadows behind them.

In many ways, it was fun to watch. Alexander-Arnold is such a supreme athlete that he was usually able to get back to where he needed to be, just in time. But at some point, he has to iron out the flaws that continue to give his many detractors the ammunition with which to criticise and call out his shortcomings.

If we take Cristiano Ronaldo and Lionel Messi out of the equation, and the endless debate between the two football superstars’ ultra-loyal fan bases, it is a challenge to find any player who divides opinion quite as fiercely as the 22-year-old who is, without question, an absolutely crucial cog in Jurgen Klopp’s Liverpool team. Alexander-Arnold is less important to England manager Gareth Southgate, who dropped the Champions League winner from his squad earlier this year and then deployed him in midfield during the recent World Cup qualifier against Andorra.

But the diametrically opposed positions taken by Klopp and Southgate perfectly sum up the debate about Alexander-Arnold. On the one hand, he is a marauding wing-back whose right-foot delivery is among the most potent in the world game, yet on the other, he is a defender who goes AWOL far too often for a player who primary role is to, well, defend.

There were at least six key moments in this pulsating Group B encounter that showcased the good and the bad of Alexander-Arnold.

In the positive side of the ledger, there was his ninth-minute burst into the Milan penalty and low shot, which looped over goalkeeper Mike Maignan for the first goal. Then there was the copyright Alexander-Arnold cross from which Joel Matip headed straight into Maignan’s hands.

In the second half, he delivered a near-post corner, poorly headed away by Ismael Bennacer, that led to Jordan Henderson’s winning goal for Liverpool. Alexander-Arnold also had a 20-yard volley saved, and he started the move from which Mohamed Salah — who had a first-half penalty saved — made it 2-2 early in the second half.

But on the flip side, both Milan goals came from Alexander-Arnold’s area of the pitch. With the first, he lost Ante Rebic, giving the Croatia forward the space to equalise against the run of play. Two minutes later, Alexander-Arnold was caught out on the halfway line, leaving Rebic and scorer Brahim Diaz to combine for Milan’s second. And just a minute after helping tee up Henderson’s goal, Alexander-Arnold lost Rebic again, and was only spared embarrassment by goalkeeper Alisson racing off his line to deny the Milan forward.

It was crazy at times. Huge highs and lows within seconds of each other. But for Liverpool at least, Alexander-Arnold’s strengths heavily outweigh his weaknesses.

Liverpool’s Champions League triumph in 2019 and Premier League title a year later owed so much to his attacking qualities. On his day, he really is unstoppable.

Because his defensive ability is not in the same league as his attacking game, though, a debate now rages over his best position.

Southgate thinks it may be in midfield, while former England captain Gary Lineker found himself engaged in a Twitter disagreement with ex-Liverpool defender Jamie Carragher over the very subject. Lineker suggested his attacking strengths and passing range would be best deployed in midfield, with Carragher arguing that he plays so far forward that he is virtually a midfielder already, but one who is so much more valuable on the right.

Klopp, meanwhile, has no doubts about his best role: “Why would you make the best right-back in the world a midfielder? I don’t understand that really.”

But Alexander-Arnold is arguably now a player without a defined position. Against Milan, and whenever he plays he for Liverpool, he played so high up the right flank that it would be wrong to call him a right-back, especially as he also drifts inside to midfield. Liverpool looked like they were playing with a back three more often than not because their right-back — if that’s what he is — was occupying the role of a right winger.

We have forwards who drift across the attacking third. Maybe Alexander-Arnold is a new breed of full-back who drifts up and down, inside and outside, and you have to accept the rough with the smooth.

While he retains the incredible energy levels that allow him to cover so much ground backwards and forwards, Alexander-Arnold will remain a player who is often Liverpool’s heartbeat. When he is on song, they play in a frenzy of attacking waves that makes them one of the favourites to win the Champions League.

But when he loses concentration and finds himself 30 or 40 yards out of position, Liverpool become weaker and vulnerable and liable to concede too often against a fellow Champions League contender — which is why the debate about Alexander-Arnold will continue long after this win against Milan.

But one thing is for certain: Klopp and Liverpool love him just the way he is. As for those on the other side of the argument? Well, don’t expect them to change anytime soon, either.