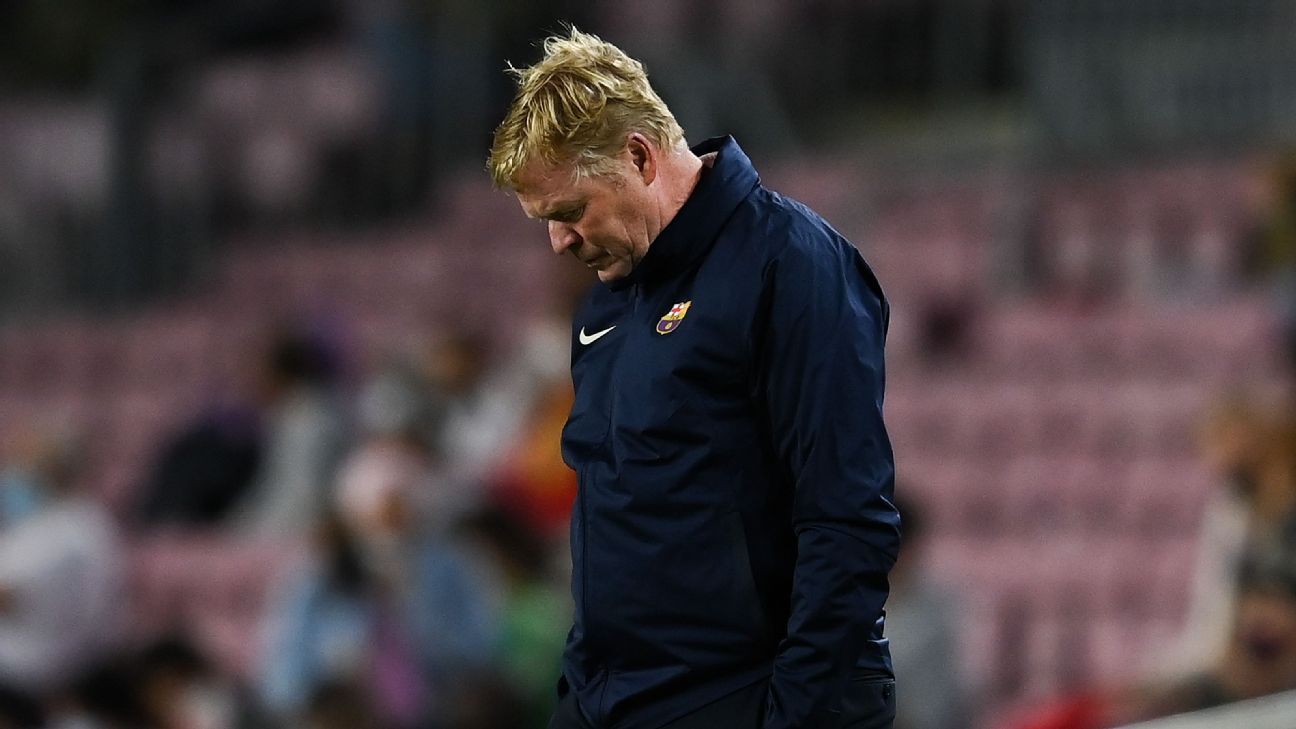 Ronald Koeman said he doesn’t have the players to implement Barcelona‘s renowned style of football as pressure increased on his job following Monday’s 1-1 draw with lowly Granada.

Barcelona were missing Ousmane Dembele, Martin Braithwaite, Pedri, Jordi Alba, Sergio Aguero and Ansu Fati for Monday’s match, and fell behind after just 88 seconds at Camp Nou. They needed a header from defender Ronald Araujo in the final minutes to salvage a draw against a team yet to win a game in LaLiga this season.

Koeman’s men are in seventh, five points behind leaders Real Madrid, with only 27,000 out of a possible 40,000 in attendance at the match. The 1-1 draw with Granada, who are 17th, followed a 3-0 humbling at the hands of Bayern Munich in the Champions League last week.

When asked about the team’s style of play, Koeman candidly said this wasn’t the Barca team of old.

“It depends on what we have available,” Koeman said after the match. “How are we going to play tiki taki [sic] if there is no space? Look at the squad. We did what we have to do. With a bit more time, we would have won.

“Today’s Barcelona is not the Barca of eight years ago. We play the Barca way, but we don’t have players to play one-on-one or with pace. You can’t be unhappy with the team’s attitude.

“We played 4-3-3, but we didn’t have pace out wide. Neither Coutinho nor Demir are that player. They’re not Ansu [Fati] or [Ousmane] Dembele, so we have to look for another way.”

Amid a turbulent summer in which the club lost Lionel Messi to Paris Saint-Germain after financial difficulties meant they could not register his new contract, Koeman’s job was under threat as president Joan Laporta pondered alternatives.

Koeman and Laporta have both insisted that their relationship is fine but tensions have spilled into the media in recent weeks. Laporta intimated Koeman didn’t have complete control of playing issues, which led the coach to complain in an interview with the Dutch media.

“Something happened that I don’t think is right,” Koeman told NOS. “[Laporta] was suggesting that the coach doesn’t have all the power. He spoke too much and was not wise.”

Previously, Koeman has said he was upset by Laporta’s behaviour in the summer, too, when he created uncertainty around his future at the club.

Koeman’s contract runs until the end of the season but sources have told ESPN there are some board members that are unsure it would be wise to keep him in place until then.

Information from ESPN’s Sam Marsden and Moises Llorens was used in this report.