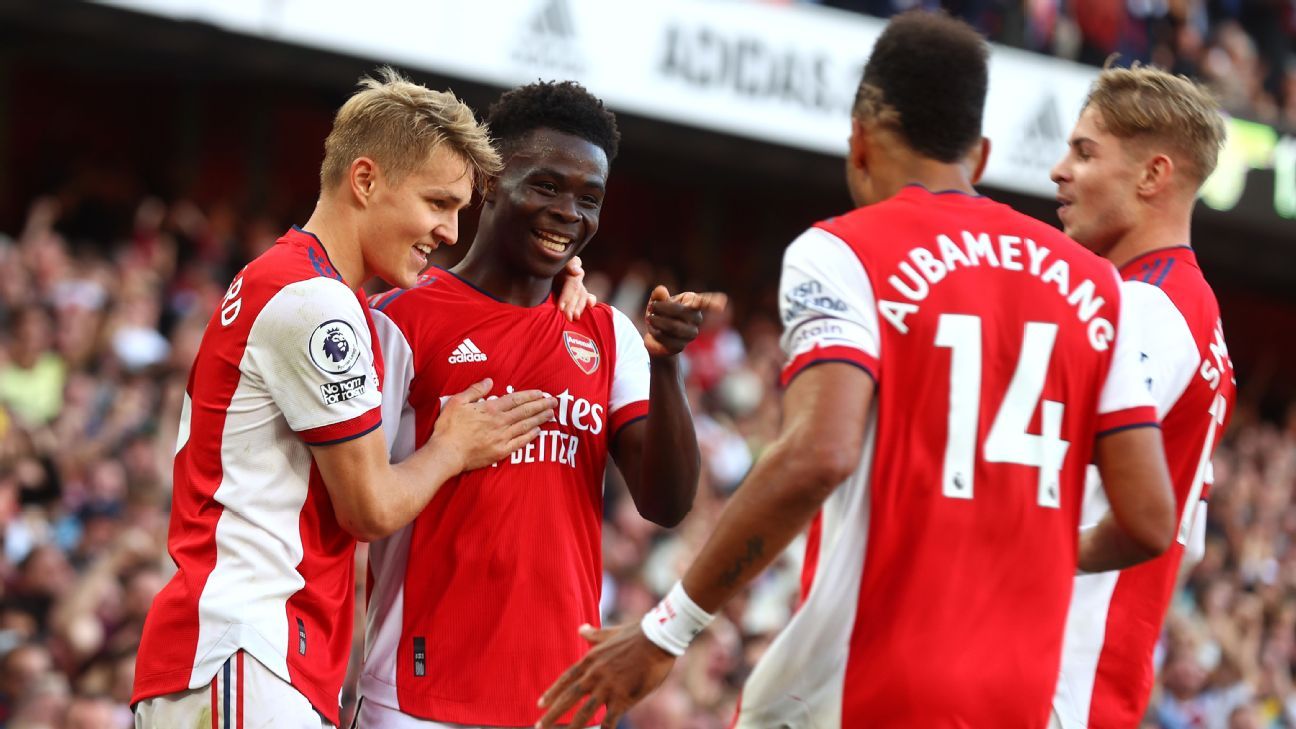 LONDON — The challenge facing Arsenal and Tottenham Hotspur these days is the same — restoration to their former glory — but Sunday’s emphatic 3-1 Gunners win suggests only one of these old rivals know how they want to go about it. Late September is too early to definitively assess the limit of any team’s aspirations, but the manner of this one-sided encounter created a clear sense that Arsenal are looking to the future while Spurs continue to cling to the past.

The Gunners’ £140 million summer spending spree comprised six signings under the age of 23. Four of them started on Sunday in a team whose average age was just over 24, a profile bolstered further by the inclusion of their two brightest homegrown talents — Emile Smith Rowe and Bukayo Saka — who both scored and were the epitome of the club’s spirit and endeavour throughout.

They began with a purpose Spurs completely lacked, an attitude exacerbated by a bizarre game plan in which they seemingly attempted to beat Arsenal without playing a midfield. Tanguy Ndombele and Dele Alli vacated the central area of the pitch far too often, leaving Pierre-Emile Hojbjerg completely overwhelmed as the home side swarmed all over them.

Spurs found a semblance of shape in the second half but the game had long ended as a contest by that point as Smith Rowe, Pierre-Emerick Aubameyang and Saka swept Arsenal into a three-goal lead inside 34 minutes — the earliest either side has ever scored that many in a north London derby. Son Heung-Min managed a 79th-minute consolation to bring a modicum of respect to the scoreline during a half in which substitutes Oliver Skipp and later Emerson gave them a little impetus, but don’t be fooled: Spurs were almost entirely absent during the periods of the game that actually mattered.

Harry Kane eventually appeared. Even as a shadow of his best, it was still an improvement on what had gone before, testing Aaron Ramsdale with a low shot from outside the box before lifting another effort wide of the goal after a brilliant first touch. Yet his wait for a Premier League goal this season goes on.

The sight of Kane applauding an almost entirely empty Spurs end at full-time almost summed up the present malaise: a player who doesn’t want to be at the club trying to acknowledge supporters who had already left in disillusionment at the team’s approach. Kane was denied the summer move to Manchester City he wanted, but if his body is still present, his mind appears to be elsewhere.

It remains one of the most pressing issues for Nuno Espirito Santo to address. Chairman Daniel Levy claimed in May that Spurs would appoint a coach to replace Jose Mourinho who would “return to playing football with the style for which we are known — free-flowing, attacking and entertaining.”

The confusion that followed — pursuing various candidates to an advanced stage, including Hansi Flick, Erik ten Hag, Antonio Conte, Paulo Fonseca, to name just four, and there were more — before settling on Nuno has bled onto the pitch. Spurs simply do not know what sort of team they are trying to be, caught between the enterprise of Mauricio Pochettino and the pragmatism of Mourinho.

“A lot of things went wrong, starting with the decisions I made,” said Nuno, bluntly. “The game plan didn’t work out because we didn’t decide it well.”

Boardroom machinations are not always reflected in results so directly — the presence of Spotify owner Daniel Ek alongside Arsenal legend Thierry Henry at Emirates Stadium was a reminder of the change of ownership many in attendance would still like to see despite Kroenke Sports & Entertainment’s (KSE) summer outlay — but the correlation at Spurs is clear.

KSE kept faith with Mikel Arteta after a dismal start because they believed in the vision the Spaniard has for the future. There are no guarantees this buoyancy will continue — confidence is more capricious in these parts than most — but Arteta can now point to a tangible return to validate his talk of a “process” and “transition,” management buzzwords that can feel hollow without the performances to back them up.

Arsenal won the FA Cup in 2020 under his stewardship but that was achieved with a safety-first, defensive setup designed to contain and counter the best sides, specifically Manchester City and then Chelsea in the semifinal and final. This victory over Tottenham was the opposite, on the front foot throughout, overwhelming their bitterest rivals with an irresistible mix of quality and control to the raucous glee of fans dressed in red.

“When you are trying rebuild and trying to do the right things, you have to stay by your values,” Arteta told BBC Sport. “Now we are creating the connection with our supporters.”

There is, however, a warning from history. Arsenal beat Spurs in March but won just one of their next five to end their hopes of qualifying for European competition. Two years ago, they came from 2-0 down to draw with Spurs in September only to win four of their next 22 in a run that cost Unai Emery his job as manager.

Arsenal face Brighton & Hove Albion and Crystal Palace either side of next month’s international break before a home game against Aston Villa and a trip to Leicester City. It is a run that is not without dangers but one that offers a path for further progress.

Spurs have the Europa Conference League to complicate games against Villa, Newcastle United, West Ham United and Manchester United during the same period, and Nuno is in a race against time already to establish an identity for this team. He has managed Spurs in just 10 competitive games and they end a painful day level on points with Arsenal even after such a chastening 90 minutes, but already it feels as though the pressure is on.

Neither of these sides are where they want to be at present, but only one looks ready to make the climb right now.