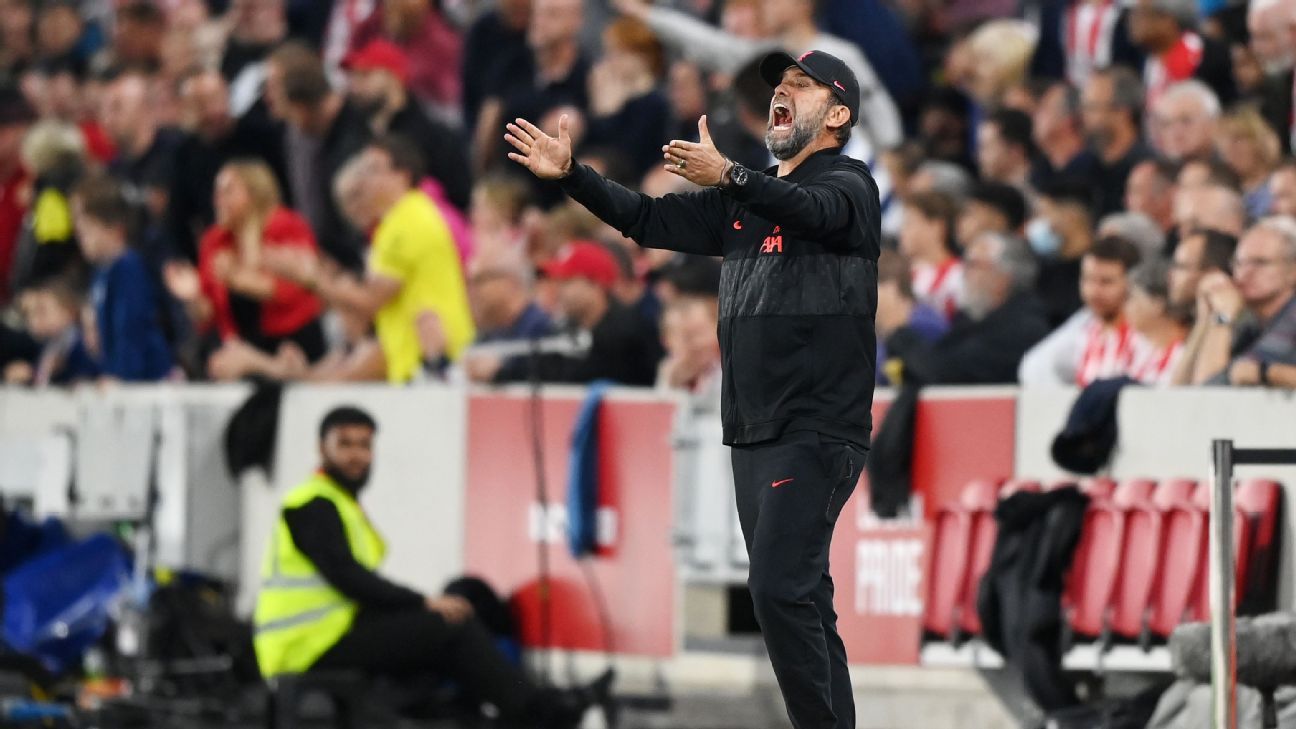 Jurgen Klopp has said he wants to see a “reaction” from Liverpool in the Champions League at Porto after his side conceded three goals at Brentford on Saturday.

Liverpool were twice pegged back and drew 3-3 to the newly-promoted Premier League side following a number of poor defensive mistakes.

– Stream ESPN FC Daily on ESPN+ (U.S. only)
– Don’t have ESPN? Get instant access
– Notebook: The latest inside stories from around Europe

It was the first time Liverpool conceded three in all competitions since defeat at Real Madrid in April and Klopp wants to see an improvement from his team on Tuesday.

“I don’t think it’s that much of a concern but we do have to show reaction that’s for sure,” he told a news conference on Monday ahead of the Porto clash.

“It’s tricky to win a football game when you are not defending on your highest level and that is what we didn’t do.

“The common opinion is that we’re only talking about the last line [of the defense] but it wasn’t only that problem. In general, we had a problem with our defending and that’s why Brentford caused us some problems.

“Porto is a different team and will play a different style but we will go direct as well and go for second balls so, we yeah we have to improve in that department for sure.

“But now is not the moment to be concerned, we spoke about it and we know we cannot do it like that and we have to show that tomorrow.”

Liverpool have scored nine goals in their last two trips to Porto in the Champions League but Klopp said those results shouldn’t have a bearing on how the team prepare for Tuesday’s match.

“It’s not an advantage at all that we won the last two games because the opponent will not want the same thing to happen again so it makes it not an easier job for us,” Klopp added.

“But we don’t think about the last two games we think about this game, they have different opportunities to set up their line-up and system and we have to prepare for that.

“The last time we came here we didn’t think about the previous game when we won 5-1 because it makes no sense. We all know most of the games can go either way, yes we were good, are good but they are a top side, no doubt about that.

“They qualify year in, year out for the Champions League and are always first or second in the Portuguese league and that is what we are preparing for, not a team from the past.”

Liverpool are looking to win their opening two Champions League group matches after securing a thrilling 3-2 win over AC Milan on Sept. 15.