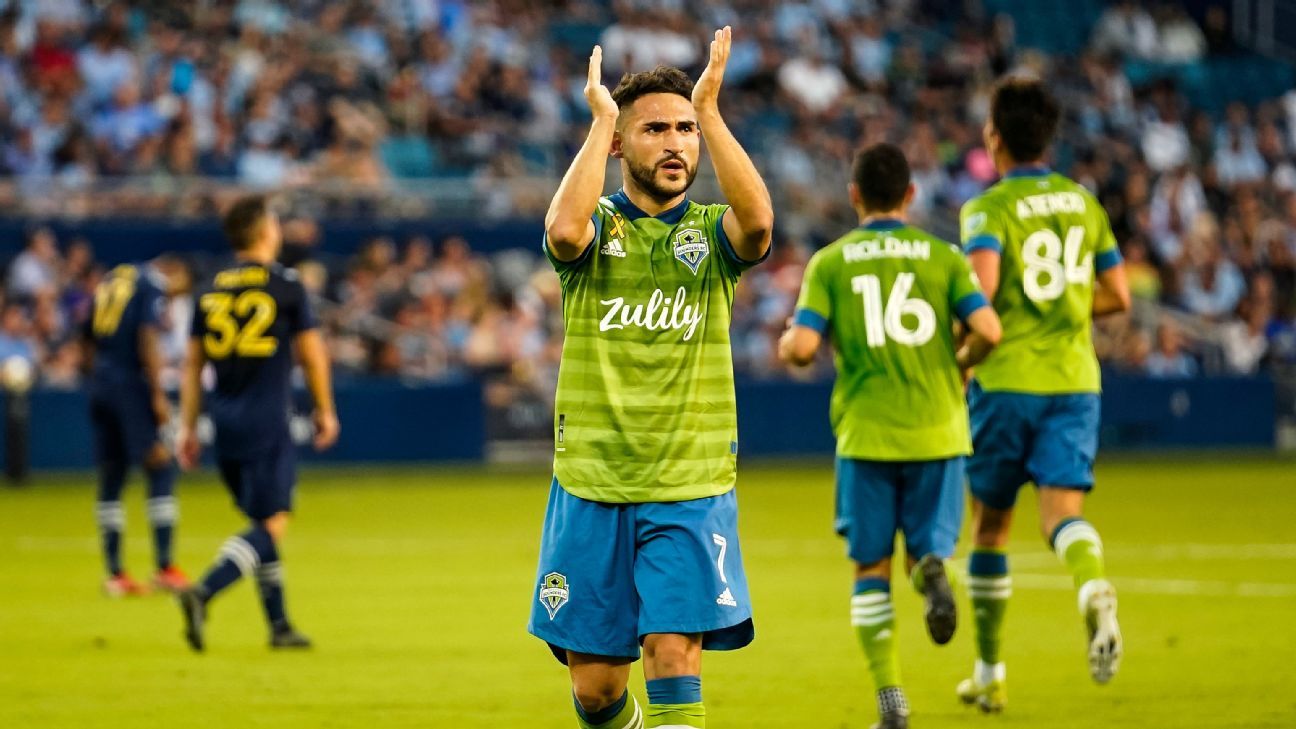 New England and Seattle continue their reign atop the order, but second-year side Nashville SC has slipped from its ascent. Meanwhile, Gonzalo Pineda’s Atlanta United is quickly becoming a team to be feared as the MLS postseason looms.

Find out where your team sits in our Week 20 Power Rankings.

The Revs got back to winning ways, beating Chicago 3-2 in midweek and then Orlando 2-1 as Adam Buksa scored one goal and forced an own goal on a second. Goalkeeper Matt Turner remains a penalty kick master, saving this time from Nani, but conceded a goal for the third game running in which he got a hand to the shot. A crack in the granite perhaps? — Carlisle

Considering where it came on the schedule, the Sounders’ 2-1 win at Sporting Kansas City on Sunday was their biggest win of the season. Cristian Roldan and Will Bruin‘s goals give Seattle a two-point lead over SKC in the Western Conference with a game in hand. The teams play against on Oct. 23. — Bonagura

Nashville wasn’t exactly scintillating in attack in a 0-0 draw with Chicago, but on a day when both Hany Mukhtar and C.J. Sapong were rested, perhaps that was to be expected. With the point, as well as the 5-1 hammering of Miami in midweek, Nashville solidified its hold on second place in the Eastern Conference. — Carlisle

A goalless draw with Toronto, the worst defensive team in MLS, feels more like a loss for Colorado, which would have ended the week in second place in the West with a win. Still, the Rapids haven’t lost in 11 matches. — Bonagura

With Seattle coming to Children’s Mercy Park — and having just played in the Leagues Cup final on Wednesday — Sunday was a huge opportunity for Sporting to take control in the Western Conference. Instead, things swung the other way in a 2-1 defeat. — Bonagura

The Union delivered an impressive performance in beating previously high-flying Atlanta 1-0, as Philadelphia’s defense stifled the Five Stripes’ attack. After going nearly two months without a goal, Kacper Przybylko now has three in his past two games, including Saturday’s game-winner. — Carlisle

Atlanta’s fine run of form came to a temporary halt, despite the heroics of goalkeeper Brad Guzan, in a 1-0 loss to Philadelphia. The absence of striker Josef Martinez due to “knee soreness” will be something to keep an eye on going forward. — Carlisle

Portland remains one of the hottest teams in the league and used an emphatic 6-1 win against Real Salt Lake to move into fourth place in the Western Conference standings. The Timbers have won five games during a six-game unbeaten run ahead of stretch against three struggling teams: LAFC, Miami and the LA Galaxy. — Bonagura

Robin Lod and Ethan Finlay both scored in a comfortable 2-0 win against Houston. Lod’s goal came just 51 seconds into the game — the Loons’ fastest strike since joining MLS in 2017 — and now the team has a pair of away games this week against D.C. and Dallas. — Bonagura

It was a head-in-the-hands week for NYCFC. Just minutes from a road win against the Red Bulls, the Cityzens conceded a penalty deep into stoppage time and were forced to settle for a draw. Then they fell at home 1-0 against their rivals, despite creating numerous chances. Now NYCFC find themselves brought back into the mire of the Eastern Conference postseason race. — Carlisle

Montreal had a chance to gain some separation from the chasing pack, but instead fell to Columbus 2-1. Just five points separates third through ninth place in the Eastern Conference, with CFM hanging on to seventh and final spot. — Carlisle

Maxime Crepeau turned in one of the best saves of the week when he dove to his right to prevent Franco Jara‘s penalty from tying the game in second-half stoppage time. Brian White‘s goal held up in a 1-0 win and has the Whitecaps knowing on the door of the final playoff spot, three points back of RSL — tied with LAFC and San Jose. — Bonagura

The Earthquakes continued their recent dominance of LAFC with a 2-0 home win that pulled the clubs level on points, three points off seventh-place RSL. Benji Kikanovic and Javier Lopez both scored in what could be a pivotal win come the end of the year. — Bonagura

Julian Gressel‘s three assists — all in the first half — powered D.C. United to a 4-2 win over Cincinnati. Conceding a pair of goals late will annoy manager Hernan Losada, but DCU are headed in the right direction under the Argentine. — Carlisle

There was certainly no disgrace in losing to New England, 2-1, but the defeat was Orlando’s fourth in a row. So is it time to worry? The Lions are getting healthier, but the schedule down the stretch looks tough, with only one gimme — an away date against Cincinnati — among their last eight games. — Carlisle

Miami’s revival has officially screeched to a halt after getting pummeled 5-1 by Nashville in midweek. That’s nine goals conceded in two home defeats. The Herons aren’t out of the playoff race yet, but the upcoming schedule is unforgiving. — Carlisle

Omir Fernandez has been making his presence felt in recent weeks, including his game-winner in Saturday’s 1-0 victory over rivals NYCFC. The win capped off a critical week for RBNY, who tied NYCFC earlier in the week with a penalty deep into stoppage time. — Carlisle

An impotent 6-1 defeat to Portland leaves RSL in the final playoff spot in the West, but just three points ahead of LAFC, Vancouver and San Jose. A game against the Galaxy on Wednesday looms large: a win would vault RSL ahead of LA. — Bonagura

Injury issues and a lack of consistency continue to plague the Black and Gold. Carlos Vela, Eduard Atuesta, Brian Rodriguez and others were all unavailable in a 2-0 loss to San Jose, where a win would have leveled LAFC on points with RSL in the Western Conference’s final playoff spot. — Bonagura

The Galaxy’s winless streak reached six games in a 2-0 loss at basement-dwelling Austin FC. They have scored just twice in four games this month and dipped into fifth place — out of a playoff hosting position. — Bonagura

The Crew are very much alive after beating Montreal 2-1 thanks to a pair of Gyasi Zardes goals, including a golazo that was the eventual game-winner. The win puts Columbus just three points back of Montreal and D.C. United for the last playoff spot in the Eastern Conference, but next up is the Campeones Cup clash against Cruz Azul. — Carlisle

The Dyanmo showed signs of life over the past couple weeks, but their three-game unbeaten run ended with a listless 2-0 defeat at Minnesota. — Bonagura

Toronto’s improved defensive play shined through in a 0-0 road draw against Colorado, its first shutout since May 12. TFC found success in midweek in the 4-0 Canadian Championship win over York United as well. — Carlisle

Sunday’s nationally televised 2-0 win against the Galaxy was the type of performance Austin can use to paint an optimistic picture of the future. The fans created another brilliant atmosphere at Q2 Stadium and Moussa Djitte and McKinze Gaines rewarded them with goals in the second half. — Bonagura

Chicago’s 0-0 draw with Nashville snapped a four-game losing streak, but it made for brutal viewing due to a scarcity of chances. This was especially true for Fire fans as the home side needed maximum points a lot more than Nashville did. Raphael Wicky is definitely on the hot seat as the season winds down. — Carlisle

A late flurry in the form of two goals and other chances from Cincinnati wasn’t near enough in Saturday’s 4-2 loss to D.C. United. This was another instance of Cincinnati not looking competitive from the opening whistle, conceding three first-half goals, including two on set pieces. Now it’s cost Jaap Stam his job. Is there anyone in Cincinnati qualified to make decisions on the technical side? — Carlisle