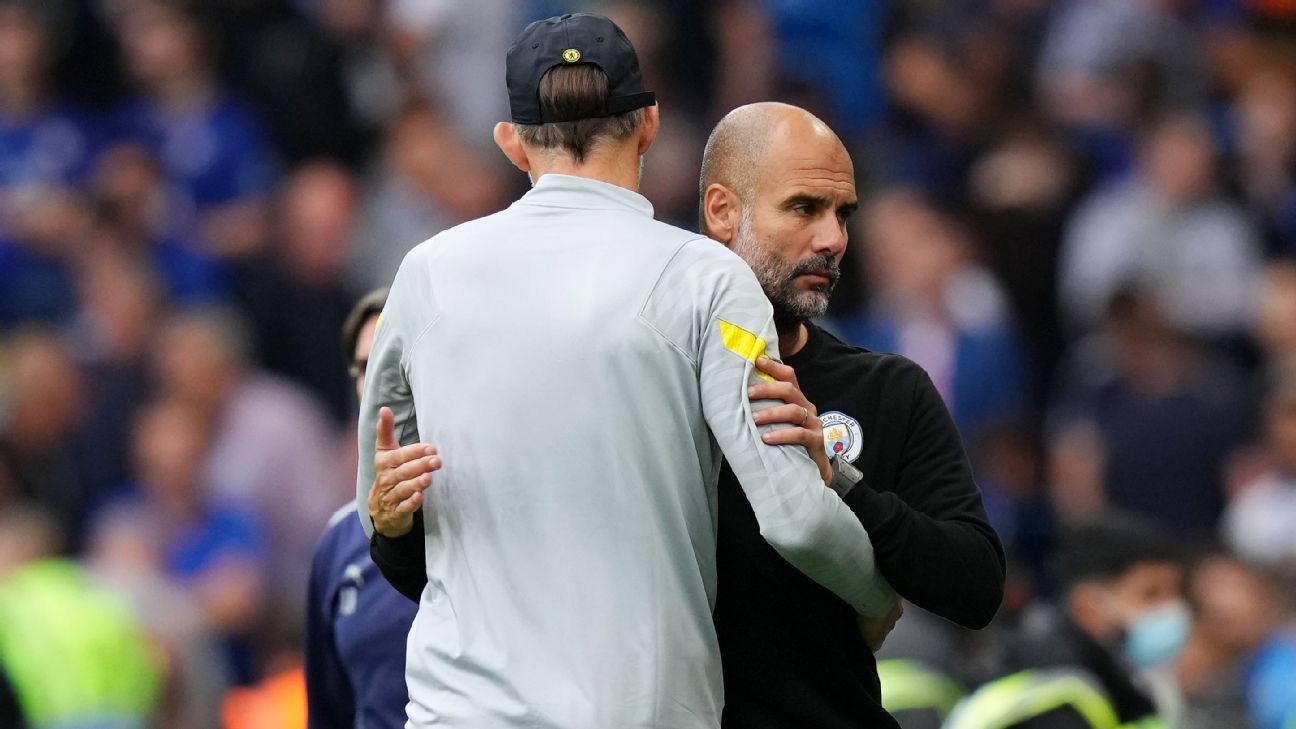 Manchester City reminded everyone why they are Premier League champions, Real Madrid hit a bump in the road, Inter and Atalanta enthralled and Arsenal claimed the North London derby spoils.

Here are James Olley, Alex Kirkland and James Tyler to discuss the big stuff you need to know from the soccer weekend around Europe.

Thomas Tuchel had the chance to become the first manager to beat a Pep Guardiola side four times in a row when Chelsea met Manchester City, so pregame talk focused on how the Chelsea boss had the tactical edge over his more-celebrated counterpart, but Guardiola gained a measure of revenge for May’s Champions League Final defeat by masterminding a thoroughly deserved 1-0 win at Stamford Bridge.

City pressed Chelsea relentlessly high up the pitch to gain control, while Romelu Lukaku looked isolated throughout. Tuchel’s decision to employ an additional defensive-minded midfielder in the centre of the pitch failed to have the desired effect, leaving Guardiola to celebrate his 221st win as City boss, more than any other manager in the club’s history. He surpasses Les McDowall, who was in charge for 592 games from 1950-63.

It was only Guardiola’s 303rd match and the latest reminder of his remarkable consistency came on an afternoon that reiterated how difficult it will be for anyone to dethrone City, despite the champions missing out on striker Harry Kane from Tottenham. — James Olley

Going into Saturday’s game with Villarreal, Real Madrid were flying. Top of LaLiga, having scored 21 times in six matches with Karim Benzema and Vinicius Junior leading the way, their previous two home games had been 5-2 and 6-1 thrashings of Celta Vigo and Real Mallorca respectively. However, an awkward 0-0 draw with Unai Emery’s team slowed los Blancos’ momentum.

Villarreal were superior in the first half, as Etienne Capoue and Dani Parejo dominated midfield and summer signing Arnaut Danjuma threatened in attack. Only later in the second period, when the visitors seemed happy to settle for a point at the Bernabeu, did Madrid come into their own. Even then, though, there was no onslaught, no late siege of the Villarreal goal.

A dose of realism is no bad thing, and coach Carlo Ancelotti is smart enough to learn from what went wrong here. Madrid have a run of what should be winnable games now — starting with Sheriff Tiraspol in the Champions League on Tuesday — before the one that really matters: At Barcelona in El Clasico on Oct. 24. — Alex Kirkland

Inter, Atalanta put on a show

Serie A served up an absolute classic on Saturday when Inter Milan and Atalanta met at San Siro in an Italian version of the “six-pointer between title rivals that could be significant, even though it’s only September.” The 2-2 draw marked the first time Inter dropped points at home in the league for more than a year, not that the neutrals will mind. This game had plenty, including a boatload of goals, a goal-line block, grievances for both sides and limitless entertainment.

The quality was high, too, as was the refreshing notion of two strong teams sticking to their plans and not being afraid to lose. After just four minutes, Nicolo Barella‘s sumptuous, curling cross was fizzed into the net on the volley by a high-speed, sliding motion from Lautaro Martinez. (By the way, is there a more in-form midfielder than Barella?) Thereafter, both sides traded a raft of chances, only for Atalanta to score twice before half-time: First, Ruslan Malinovskyi let rip from 25 yards and scorched his shot full beyond Samir Handanovic, then Rafael Toloi pounced on a rebound.

Yet Atalanta had that nagging issue of not being able to convert dominance into a comfortable scoreline, which is a problem against a fighter like Inter. The hosts pushed and probed for a levelled, finally to hit paydirt via the ageless Edin Dzeko.

At 2-2, though, the best was yet to come. Inter won a penalty (confirmed by VAR) after a handball, but sub Federico Dimarco smashed it off the bar, leading to delirium for the visitors. Three minutes later, Roberto Piccoli thought he had given Atalanta a dramatic late win only for — yep, VAR — to overturn the goal because the ball had gone out of play in the build-up. Phew! — Tyler

Are Arsenal good again? Or are Tottenham bad?

The North London derby gave us something not seen in years: A second straight Arsenal win over Spurs. You have to go back to 2013-14 for the last time that happened and, after weeks of waiting to see what a “revamped” Arsenal could be, we finally witnessed it.

Mikel Arteta’s side were bright and confident in possession, aggressive in the tackle and sharp in the final third. They attacked in what felt like waves throughout the first half and were rewarded with a staggering three-goal lead inside the opening 34 minutes: Emile Smith Rowe (goal, assist) and Bukayo Saka (goal, assist) were a constant threat on the flanks and the Martin Odegaard / Thomas Partey / Granit Xhaka midfield axis had almost complete control.

Tottenham were a mess and Harry Kane’s lamentable form continued; the England veteran wasted several gilt-edged chances, with one such miss in the first half leading directly to Arsenal’s second goal. Son Heung-Min pulled one back late, but this was the Gunners’ day. It felt like a statement win, but now they must make the most of a winnable run of fixtures. — James Tyler

It was a goal so sweet, you wish it counted double. At the very least, you hope it would be enough to give your team a win, but Liverpool weren’t so fortunate on Saturday as they wobbled their way to a stressful — but really enjoyable — 3-3 draw at Brentford.

Our scouser in midfield 😍

Jurgen Klopp’s attack is as sharp as ever and what satisfied most about Jones’ thundering strike was not the fact that he hit it perfectly, leaving David Raya no chance; rather, it was that, that barely a minute earlier, he had a similar effort only to slice it hilariously over the bar and into the crowd. Second time’s a charm, we suppose. — Tyler

It had been a long time coming, but more than 10 months after suffering a knee injury so problematic that some questioned whether he would be the same player upon his return, Ansu Fati stepped onto the Camp Nou pitch and provided a moment of joy for a club in crisis.

Barcelona were already cruising, 2-0 up against a poor Levante team, when the 18-year-old was introduced in the 81st minute. Ten minutes later, Ansu picked up possession just inside the visitors’ half, ran straight at a panicked defence, then cut inside onto his right foot and slammed the ball past goalkeeper Aitor Fernandez. The wild celebrations felt cathartic. Lionel Messi‘s No. 10 shirt is in safe hands. — Kirkland

Arsenal ripped Tottenham to shreds and nothing embodied the one-side nature of the game more than Pierre-Emerick Aubameyang‘s 27th-minute goal, which also showed what Gunners boss Mikel Arteta wants to see with regard to his team playing out from the back.


This move began with goalkeeper Aaron Ramsdale finding Granit Xhaka. The Swiss midfielder combined with Emile Smith Rowe and Kieran Tierney to find Aubameyang, whose flick and spin set Arsenal off on the counter-attack. Smith Rowe crossed and Aubameyang did the rest, netting his eighth goal in 11 games against Spurs. — Olley

Marco Rose would have wanted any other result heading back to the club he left, Borussia Monchengladbach, with Borussia Dortmund, yet BVB continued to look like a misshapen group of nearly-theres in a 1-0 loss on Saturday.

The goal was scrappy, but reward for Gladbach’s persistence: Denis Zakaria‘s dribble into the box was aided by a generous deflection off Jude Bellingham, leaving the Swiss midfielder free to slice the ball in from 12 yards out under minimal pressure. Dortmund’s task got harder when Mahmoud Dahoud was sent off five minutes before half-time.

In front of a partisan crowd, Rose’s new club created little over 90 minutes; with Erling Haaland and Marco Reus ruled out before the match, there was nobody capable of picking up the slack. Dortmund are still in the Bundesliga‘s top four, but a quartet of clubs are within three points and this was not good enough for a would-be title contender. — Tyler

Saying Atletico are in trouble may be a little premature — they still sit comfortably in LaLiga’s top four — but all is not well with the Spanish champions, who have just two wins in their last six games in all competitions following Saturday’s surprise 1-0 defeat at Alaves, who were bottom of the table going into the match, with zero points and one goal scored.

Atletico expectations were sky high this season, with Diego Simeone assembling arguably his best-ever squad after Antoine Griezmann was added to the attacking firepower of Luis Suarez, Joao Felix, Angel Correa, Matheus Cunha, Yannick Carrasco & Co. However, Griezmann has yet to contribute a goal or assist, and this weekend it was Correa, who started the season as Atleti’s most in-form player, who dropped out.

Simeone tried (and failed) to find a winning formula and things do not get easier this week, with a trip to Milan in the Champions League followed by a home date with a team that really is in crisis, Barcelona. — Kirkland

MVP of the weekend

RB Leipzig kickstarted their season in fine style with a thumping 6-0 win over Hertha Berlin that was inspired by an all-action performance from Christopher Nkunku, who scored his first brace in the Bundesliga (10 days after netting a Champions League hat trick at Manchester City).

The 23-year-old’s impact ran far deeper, however, with Nkunku also registering an assist and winning a penalty to have a hand in four of his side’s first five goals. Nkunku showed the range of his talent, starting with a wonderfully delicate finish to lift the ball over Hertha goalkeeper Alexander Schwolow. Seven minutes later, he capped a fine counter-attack with an excellent cross to give Yussuf Poulsen a tap-in.

Early in the second half, Hertha defender Niklas Stark could only halt Nkunku’s run by hauling him down for a penalty and the Frenchman capped a stunning performance with a beautiful 70th-minute free kick, which he curled over the wall and into the top corner. The goals were his first first in 14 league matches; in one afternoon, Leipzig doubled their entire season tally. — Olley