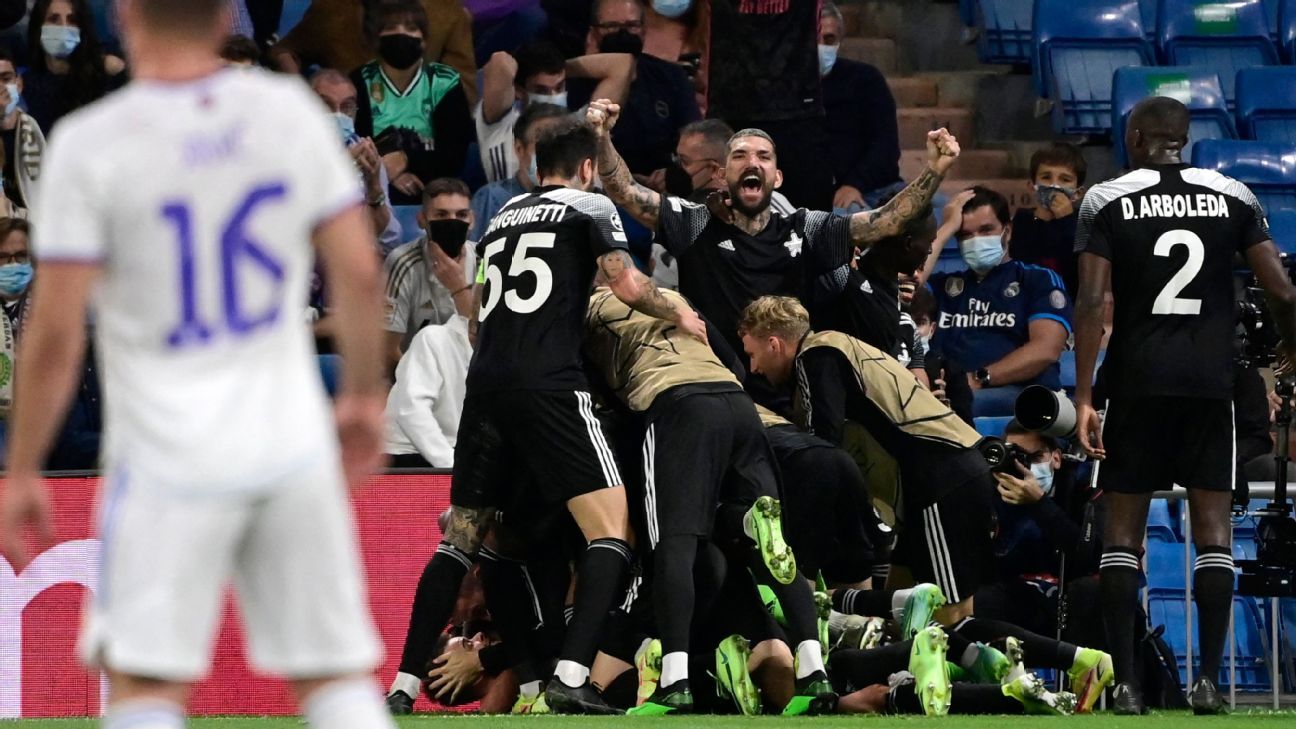 Sometimes, two seemingly conflicting ideas can exist at once. Like how to feel about Sheriff Tiraspol, and whether it’s a “fairy tale” or a sad reflection of what it takes for a smaller, poorer nation to send a team to the Champions League.

Let’s start with the good bit to cheer us up, shall we? This is a club that beat Real Madrid at the Santiago Bernabeu on Tuesday night to move to the top of their Champions League group, with six points out of six. Before beating the Spanish giants — who have won more European Cups than anyone else, and who won four Champions League crowns in the last eight seasons — in the group stage opener, they defeated Shakhtar Donetsk, who have qualified for the Champions League for 10 straight years.

To even get into this season’s Champions League, Sheriff had to start their season in the first qualifying round way back on July 7, just five weeks after their 2020-21 campaign ended and at a time when the European football world was preoccupied with other matters, like the semifinals of the Euros. Along the way, they beat Dinamo Zagreb and former European champions Red Star Belgrade, both of whom were in the Champions League just two years ago.

Now consider the fact that Sheriff were only founded in 1997, that they play in a 12,746-seat stadium that they didn’t fill even pre-pandemic — their average domestic attendance in 2019 was less than 1,000 per game — and that in their history, they’d never advanced beyond the group stage. Oh, and their late winner was scored by somebody named Sebastian Thill, who himself made history as the first player from tiny Luxembourg to score a Champions League goal.

(Before you imagine Thill to be some kind of phenom who happens to have been born in a tiny country — sort of a Benelux version of Liberia’s legendary striker, George Weah — well, he’s not. He’s 27, had only ever played in Luxembourg until last season and has been capped just 16 times, which means he doesn’t even figure in the top 100 list of most-capped Luxembourg footballers.)

It’s hard to make an apt analogy for Tuesday’s win. Maybe if a tiny online college founded in the late 1990s beat Oregon, Maryland, Gonzaga and Duke in rapid succession? And if they defeated the latter at Cameron Field House in front of the Crazies, thanks to a buzzer-beating three-pointer drained by a guy from Belize who isn’t even among Belize’s top 100 players?

When you then juxtapose it with the shelved (for now) Super League project driven by Real Madrid president Florentino Perez, who memorably said the Champions League group stage was “not interesting” and that football would be “dead by 2024” if not for the sort of Super League — a structure that would de facto exclude not just the Sheriffs of this world, but all but a handful of Europe’s professional clubs on a permanent basis — the temptation to troll becomes hard to resist.

Was Real Madrid vs. Sheriff Tiraspol more interesting than a bog-standard group stage equivalent — say, Real Madrid vs. Tottenham — in Florentino’s proposed Super League format, with two groups of 10 playing home and away and five of the 10 advancing? Probably. And when you consider the underdog twist, it becomes even more compelling.

Sheriff’s starting XI had a grand total of 28 international caps: Thill’s 16 for Luxembourg, Dimitris Kolovos’ nine for Greece and Jasurbek Yakshiboev’s three for Uzbekistan (I kid you not: Uzbekistan). They have an Adama Traore and a Cristiano, but it’s not that Adama Traore (who’s tearing it up in the Premier League), and it’s obviously not that Cristiano, either. They have two guys — one from Colombia (Frank Castaneda) and one from Ghana (Edmund Addo) — they signed from a Slovakian club who are perennial relegation candidates. (If you’ve heard of Senica before right now, you’re either very knowledgeable on football or Slovakian.)

Let it be a reminder that ordinary players, on an ordinary Tuesday night, can walk into the temple of football and knock it down, like Samson back in the day. That’s part of the appeal of this sport. It’s low-scoring, it’s mano-a-mano and the gap between superstars and extras may be huge over time, but on any given day, it’s tiny and anything can happen. Throw in the fact that this is the first Moldovan team to make it into the Champions League — Moldova is, by some distance, the poorest country in Europe and that makes a difference in professional sports — and that many in Tiraspol don’t even consider themselves Moldovan, but Transnistrian or even Russian (here’s a primer on the geopolitics) and you’ve got yourself a ready-made feature curio.

Except there’s a little problem in viewing this strictly through the “fairytale” lens. And no, it’s not just the fact that there is very little Moldovan about this team: neither the coach, who is Ukrainian, nor any of the players who beat Madrid are Moldovan (or Transnistrian, for that matter). (Before Madrid fans — or anyone else — get high and mighty about national identity, please consider that at the final whistle there were exactly zero Spaniards on the pitch.)

Rather, it’s Sheriff itself and the circumstances behind their rise, as well as the people bankrolling them. This thread, by journalist Slava Malamud, who grew up a few miles away, gives some context from his perspective. At a time when football is often used for geopolitical or nationalistic purposes, when unsavoury or totalitarian figures play an increasingly large role in the success of many clubs, and when the gap between the rich super clubs and everyone else is as great as ever, it’s tempting to see the Sheriff story as an antidote to do this. Except Sheriff are themselves a super club, writ small.

They’ve been Moldovan champions in 19 of the last 21 years, they have the country’s only modern stadium and they’re bankrolled by the Sheriff corporation, a conglomerate that includes Transnistria’s only supermarket chain, gas station chain, telephone network, TV channels, publishing house and distillery. The owners have close ties to the local government, which, in turn, is funded and protected by Russia. This isn’t just a company team; it’s a company town in the company enclave of Transnistria, and you can’t shake the feeling that this is what it takes for “fairytales” like this to take place in the modern game.

We can talk about dreams and the fact that on any given day two Brazilians, two Colombians, two Greeks, a Peruvian, a Ghanaian, a Malian, an Uzbek and a Luxembourger — virtually all of them journeymen and no-names — can defeat Real Madrid and that’s the beauty of the sport. But dreams aren’t enough. Without a club that’s a local powerhouse, with a guaranteed annual shot at the Champions League qualifying rounds and owners who can do what they like (at least locally), you likely don’t even get a chance to dream. Having a globalised, multi-national squad of players isn’t the only thing Sheriff have in common with some of the continent’s elite.

So yes, both things are likely true. Sheriff’s epic underdog victory at the Santiago Bernabeu is most definitely to be celebrated as an incredible achievement. Equally, the circumstances that made it possible are to be lamented, as is the fact that, without them, it’s virtually impossible for 99 percent of Europe to compete.