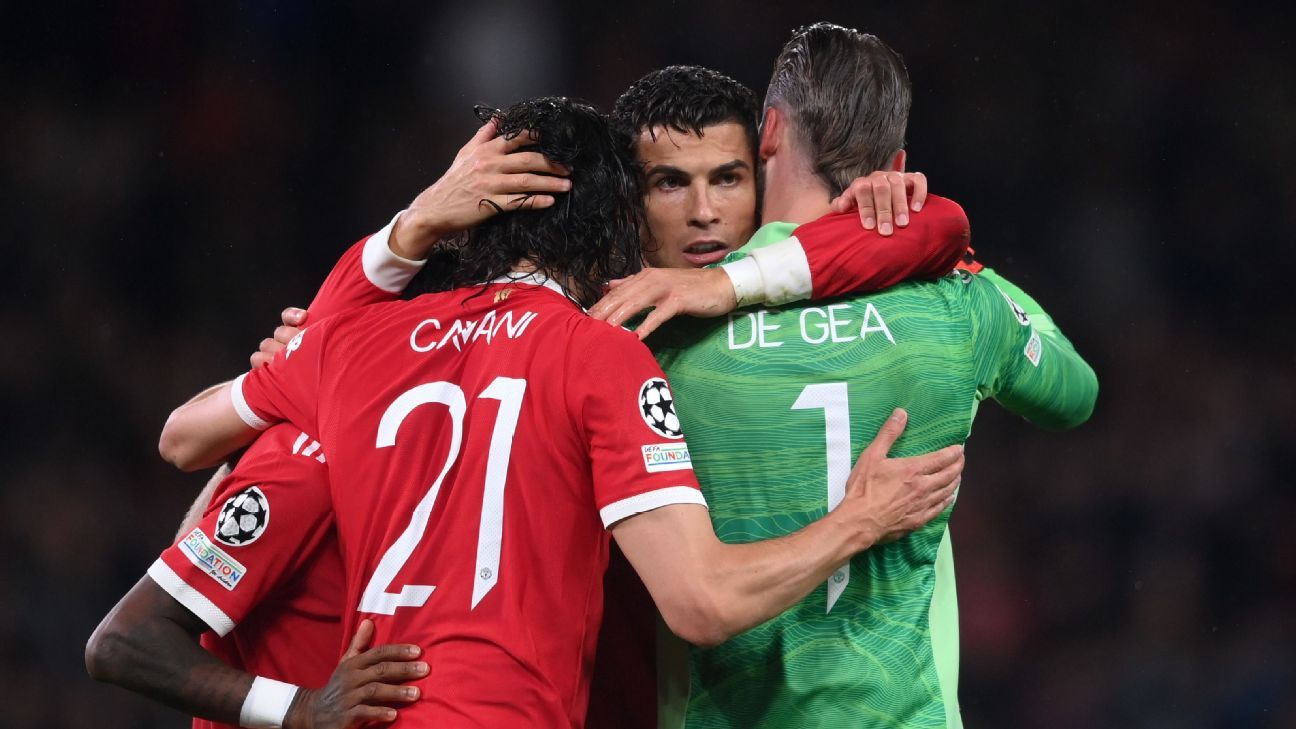 A game they should have lost ended in a 2-1 victory over Villarreal thanks to a winner deep into stoppage time from Cristiano Ronaldo.

It was one of those nights when United’s No.7 seemed so much on the periphery that Ole Gunnar Solskjaer could have substituted him at any point during the second half.

He will be glad he didn’t.

With the 36-year-old on the pitch, you never know and with one swipe of his right boot in the fifth minute of injury time, a night that threatened to end in boos was bookended with chants of “Viva Ronaldo”.

Importantly for Solskjaer, the Portuguese forward delivered a much-needed win after back-to-back defeats to West Ham and Aston Villa and got United up and running in Group F of the Champions League. Three defeats in four ahead of kick-off had brought the walls closing in but, for now, there is breathing space again.

“He’s done that so many times,” said Solskjaer afterwards. “You saw him against Ireland a month ago, he missed a penalty early, didn’t touch the ball more or less, and scored two great headers in the last minutes.

“That’s what he’s done throughout his career. He stays in the game. I’ve seen him all day, the way he’s built up for this game and when he gets that one chance it’s a goal.

“He had a couple of half chances but a true mark of a great finisher is that he keeps calm when the chance arrives.”

Despite Ronaldo’s late intervention, it is not a performance that will quieten the United supporters who have already decided Solskjaer is not the right man for the job, but the Norwegian showed again he is an expert in getting a result when he needs one.

He has David De Gea to thank for that as much as his star striker.

That the first half ended with Jadon Sancho and Bruno Fernandes arguing as they walked off said everything about how the first 45 minutes had gone.

Without any kind of control — particularly down Villarreal’s left where Diogo Dalot struggled to contain Arnaut Danjuma — De Gea was called on to make three world class saves to keep the score at 0-0.

One United corner ended with the visitors breaking two against one and it was only a poor pass from Paco Alcacer that prevented the Spaniard from having to make another stop.

Solskjaer spent most of the half racing down the stairs of the home bench to poke his players into some kind of reaction, but it didn’t come until a goal that had looked likely all night finally arrived.

Danjuma had Dalot chasing thin air again and the former Bournemouth man crossed for Alcacer to stab the ball into the net just after half-time.

If ever a goal had been coming it was this one, but it at least stirred something in the home side. Fernandes flicked a free kick towards Alex Telles and the Brazil full-back, in for the injured Luke Shaw, thrashed his volley into the bottom corner to score his first goal for the club.

It wasn’t quite Paul Scholes against Bradford but it was still skill and execution of the highest order, two things missing in the first half and during the majority of the defeat to Aston Villa on Saturday.

Sancho might have scored again minutes later, but slipped at the vital moment.

De Gea, though, wasn’t done for the night and made another impressive save to stop Boulaye Dia bundling in a second for Villarreal.

“Thankfully we had the best goalkeeper in the world tonight,” said Solskjaer. “David was fantastic. They deserved to lead.

“David has really come back [after the summer] with a determination and work rate I enjoy. Again he got a deserved outcome. He saved us tonight. We have to be realistic and say that.”

Had De Gea not been at his best, Villarreal would have been out of sight and it would have been hard for Solskjaer to argue that his team had not got what they deserved.

Instead, when the final whistle blew he was throwing his arms up in celebration. In the last minute of five added on at the end, substitute Jesse Lingard got a vital toe on a loose ball in the box and Ronaldo smashed it in from a tight angle.

It was his 12th Champions League goal in the 90th minute or later — double any other player in the competition’s history — and was the perfect way to mark his first game in the tournament for United at Old Trafford since the 2009 semifinal against Arsenal.

He is here to get Solskjaer’s team back to that level and while it wasn’t a performance to inspire confidence that can happen this season, with Ronaldo on the pitch you just never know.