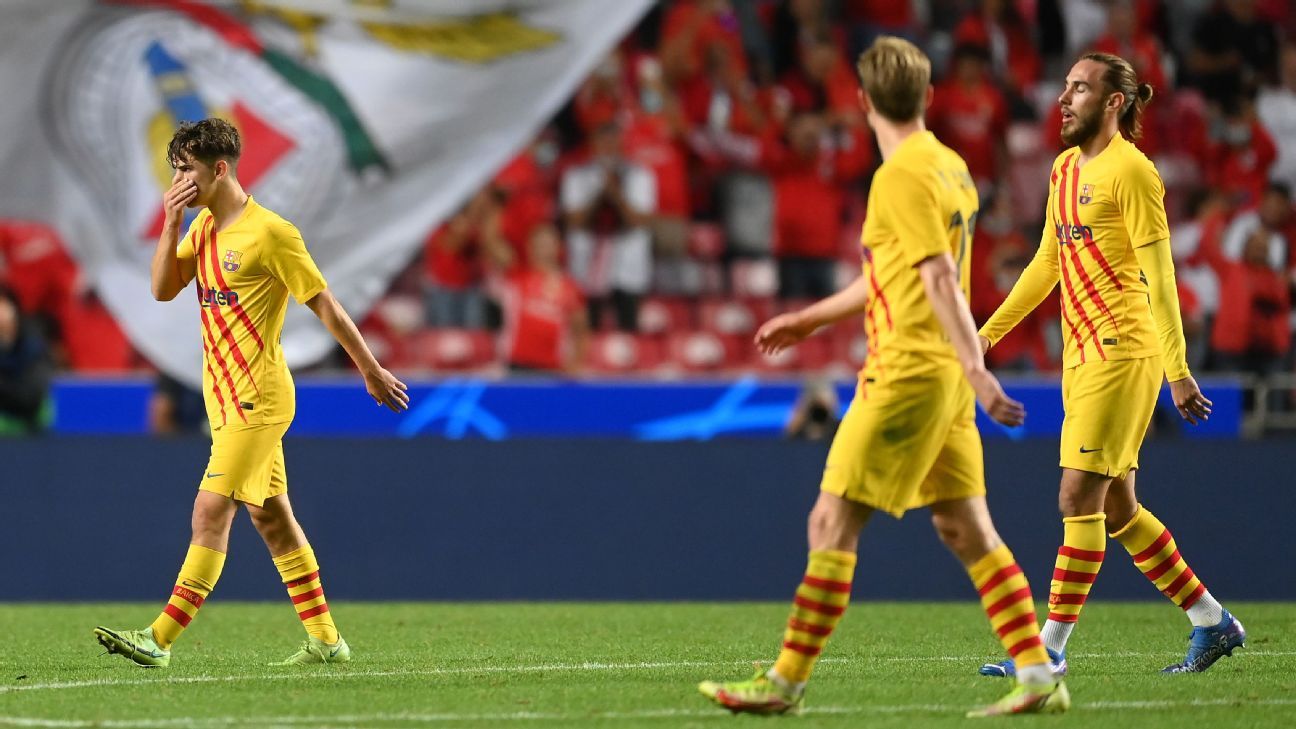 Matchday 2 of the Champions League group stage is in the books and there is plenty to discuss, from Cristiano Ronaldo and Lionel Messi starring for Manchester United and PSG respectively, to a woeful week for Spanish giants Barcelona and Real Madrid.

Can things get any worse for Barcelona?

Marsden: They sure can! After their lamentable defeat at Benfica, Barcelona travel to reigning champions Atletico Madrid on Saturday in LaLiga (3 p.m. ET; stream LIVE on ESPN+) and then have home games against Valencia, Dynamo Kiev and Real Madrid after the international break.

There is a good chance, then, that things get a lot worse before they start to get better. The more pressing question is: will Ronald Koeman still be in charge at the Wanda Metropolitano this weekend? At a club in utter crisis, the coach is under massive pressure.

Marcotti: I think things will get markedly worse if Koeman loses the support of the senior players. And there’s a chance of that happening, because the decision to withdraw Gerard Pique in the 35th minute was a huge one. Yes, he had been booked and, yes, he made the sort of foul which could easily have warranted a second yellow. But to take a guy like him off in those circumstances means you don’t trust him. (Not to mention that it resulted in screwing up the midfield, because Frenkie de Jong had to move into defence.) Pique did not look happy.

It’s the sort of call you make if you’re 100% confident but I don’t see how Koeman can be. If he loses the support of the senior core of Pique, Jordi Alba and Sergio Busquets, then Barca lose to Atletico Madrid (or simply performs badly) there’s a very good chance he won’t be back after the international break.

Ogden: Barca can still make it out of their group, but have no margin for error after back-to-back defeats to Bayern Munich and Benfica. Whether or not it remains Koeman’s team, they simply have to bank six points from the double-header against Dynamo Kiev and then beat Benfica at Camp Nou, then hope that nine points will be enough ahead of a trip to Bayern.

But that scenario is based on everything going right in the next three games and nobody would risk their loose change on Barcelona getting a result anywhere. So yes, it can get worse, but Barca still have quality players and they have the talent to recover.

What else caught your attention on Matchday 2?

Gab Marcotti: I thought there were some great games and great performances, but I want to talk about refereeing, which was decidedly a mixed bag. I think Kevin De Bruyne should have been sent off for Manchester City vs. PSG but at least that didn’t impact the outcome of the game.

Then there was the officiating in the AC Milan vs. Atletico game. That second yellow for Franck Kessie was absurd. Sure, you can blame him for putting himself in that position when he’s already been booked, but surely it takes more than that to send a player off during the first half of a Champions League game. The penalty at the end was also the wrong call and how you get it wrong with VAR is beyond me. Thomas Lemar and Pierre Kalulu are very close to each other and you can clearly see the ball coming off Lemar’s arm into Kalulu.

But all that paled in comparison to the call at the end of the Wolfsburg vs. Sevilla game. Josuha Guilavogui clears the ball and Erik Lamela runs into his outstretched boot. If you haven’t seen it, find it and you’ll be horrified. The referee didn’t call it at all, it was the VAR who asked him to intervene. Why? I have no clue. Nor do I understand how, after looking at it, the referee could still give a card and a penalty. And it’s a shame, because overall I think the officiating has been good, especially in the way referees have managed to let games flow without brandishing cards or calling petty fouls. But these were some big blunders in specific games.

Mark Ogden: This may ultimately be a fleeting moment of unfancied teams taking advantage of so-called super clubs being in a state of flux, but five of the teams involved in plans for a breakaway Super League fewer than six months ago are outside the top two in their group.

Barcelona had a terrible week and remain pointless at the foot of Group E, Inter and AC Milan are still winless and Manchester City and Manchester United, despite Cristiano Ronaldo’s 95th-minute winner against Villarreal for the latter, are third.

Will it last? Probably not, but the likes of Club Brugge, Atalanta, Benfica and Sheriff Tiraspol have given themselves a chance to qualify for the knockout stages, proving that football needs drama and uncertainty, rather than a closed-shop Super League.

Steve Nicol says Lionel Messi made a statement by scoring his first goal for PSG against a team of Man City’s quality.

Sam Marsden: All eyes were on Paris Saint-Germain and Manchester City, but Bayern Munich continue to go about their business in an effective manner.

It doesn’t need saying anymore, but Robert Lewandowski is a goal machine — he scored twice in a 5-0 win over Dynamo Kiev — and he has a stellar support cast, with Serge Gnabry and Leroy Sane also netting on Wednesday. Under new coach Julian Nagelsmann, Bayern will be desperate to avenge last season’s early exit at the hands of PSG.

Which of the winless Milan clubs do you give most hope to reach the last 16, and why?

Ogden: It has to be Inter. Their next two games are home and away against Sheriff Tiraspol and, although the Moldovan champions stunned the world by beating Real Madrid in the Bernabeu, Inter will now know everything about them and Sheriff can no longer rely on shock value. Inter should win both and then look to beat Shakhtar Donetsk at San Siro to qualify.

In contrast, Milan have yet to register a point in Group B and even back-to-back wins against Porto would leave them relying on Liverpool or Atletico Madrid slipping up, which won’t happen. Inter have a much easier route to the round of 16, but they have to avoid being the latest Sheriff victims.

Marsden: Inter are better placed, but only because of the relative strength of the two groups. Despite Sheriff’s heroics in Madrid this week, Simone Inzaghi’s must target six points from the back-to-back matches they now have against the Moldovan champions. If they manage that, a win against Shakhtar Donetsk at the San Siro should see them through. As for Milan, they’re capable of taking six points from Porto, but hauling in Atletico Madrid and Liverpool is going to be tough.

Marcotti: I think both have played better than their results so far. I suppose you’d lean towards Inter because they have one point (rather than zero) and because they have, on paper, an easier group. Sheriff are a great tale, but they scored two world-class goals at the Bernabeu and still could have conceded four or five. So you have to assume Inter will take all six points against Sheriff and then it’s Shakhtar at home. By the time they play Madrid again, they might be facing an already qualified team. That said, given how Milan have played, I don’t think they’re out of it yet.

In light of Sheriff beating Real Madrid, what was your most memorable group-stage upset?

Marcotti: I’ll go with BATE Borisov’s 3-1 win over Bayern in 2012-13. Bayern were managed by Jupp Heynckes and had won nine in a row in all competitions to start the season. The year before, they had reached the Champions League final (losing to Chelsea on penalties) and the German Cup final (losing to Jurgen Klopp’s Borussia Dortmund) and had finished second in the Bundesliga, so they weren’t lacking in motivation. Nobody knew what country BATE were from, much less if they were any good (Belarus, by the way.) Still, Bayern went on to win the Treble that season, so it was just a blip.

Ogden: Fenerbahce’s 1-0 win against Manchester United at Old Trafford in October 1996 was more than memorable, it was historic. Prior to that Group C defeat, United had never lost at home in European competition; a run that stretched back 40 years to their first campaign in 1956-57. It was a proud record, but one that manager Sir Alex Ferguson admitted had become a burden.

Nobody expected the run to end against Fenerbahce, but Elvir Bolic’s 78th-minute goal sealed victory for the Turkish team. United still qualified from the group and reached the semifinal, where they lost at home again to that season’s winners, Borussia Dortmund.

Marsden: Celtic’s win over Barcelona at Celtic Park in 2012 was remarkable. Barca, under coach Tito Vilanova — who had just replaced Pep Guardiola — were considered the best side in Europe, with Lionel Messi closing on a 91-goal calendar year for club and country.

However, the Scottish side scored with two of their three shots on target and, despite having just 16% of the possession, managed to keep a clean sheet until Messi’s late consolation. The win helped Celtic to qualify out of the group, although they were dumped out by Juventus in the round of 16.