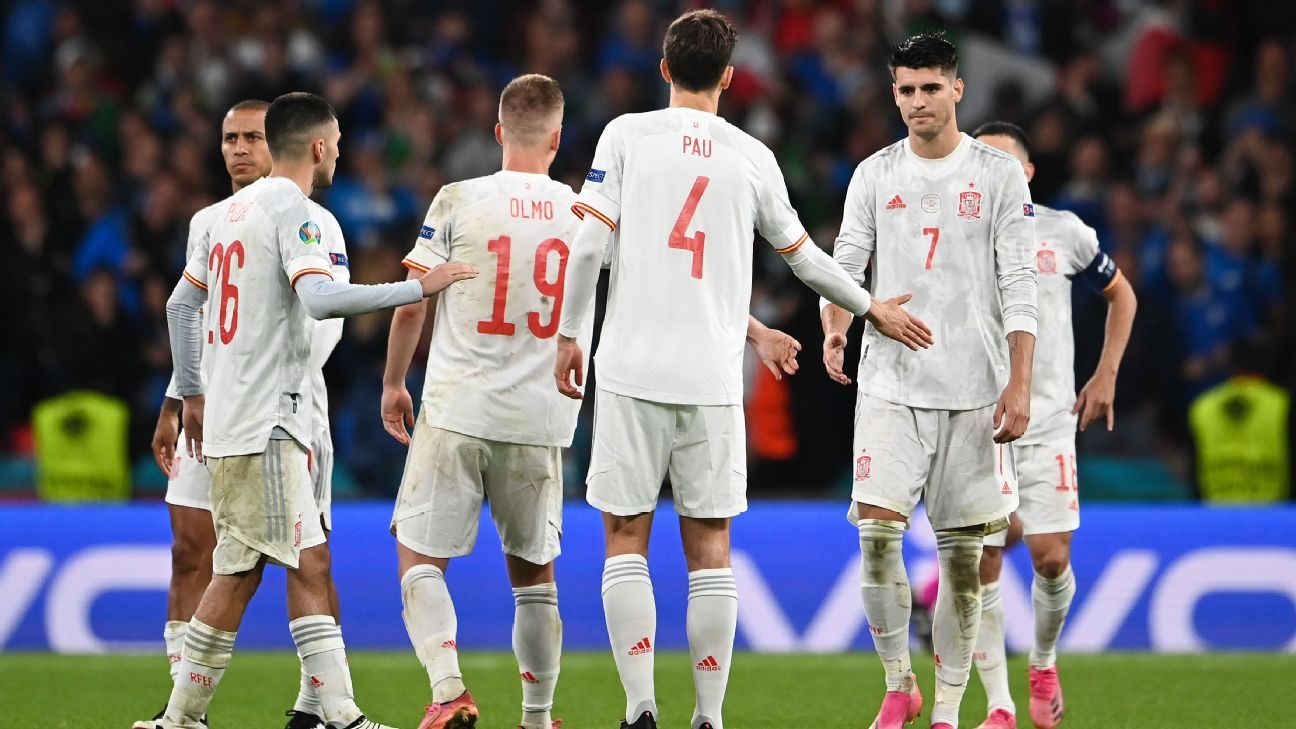 The shocking recent setbacks suffered by Barcelona and Real Madrid, domestically and in Europe, aren’t caused by problems that will be instantly solved by the sackings of Ronald Koeman or Carlo Ancelotti.

Barcelona, of the two, are more undermined by their coach.

They remain a high-tone squad, capable of competing for trophies this season, and Koeman’s insistence on playing formations and brands of football that don’t suit his personnel isn’t helping. Were Xavi, or a less heralded candidate like Paulo Sousa, parachuted in to take over this week, there’s every chance that a clearer, firmer perspective on how to play 4-3-3 football properly might make a perceptible difference quickly. But the new manager wouldn’t be able to get to the real heart of the problem without time, resources and a huge reset. Back to that in a moment.

Madrid, overall, are in better shape.

However jumpy president Florentino Perez inevitably is right now, there shouldn’t be any mutterings about removing Ancelotti even after the consecutive setbacks against Sherrif (who saw that coming?) and Espanyol (only their second LaLiga win over Los Blancos in 14 years). But Madrid are badly afflicted by the same systematic flaws as Barcelona.

These are flaws that might, now, become an Achilles’ heel for the Spanish national team as it seeks revenge for the summer’s cruel European Championship semifinal shootout defeat against Italy on Wednesday in the Nations League (2:45 p.m. ET, stream live on ESPN2).

The pressing matter is that Spain can’t, well, press. Or don’t, anyway. The country that reinvented pressing, positional football, passing-to-victory isn’t just in danger of being blunted — it risks being overtaken.

If you’re football inquisitive, you’ll understand that there isn’t much new under the sun. My first vision of pressing was when Netherlands‘ absolutely remarkable national team, coached by Rinus Michels, all hared about the pitch during World Cup ’74 a little like 11 orange-jacketed puppies chasing a tennis ball.

Even though they had a squad full of absolutely glorious technical players, capable of passing, shooting and tackling their way to great achievements, Michels had them positioning the highest offside line I’d ever seen in my young life and the most remarkable press — which you could have set to Benny Hill music.

For what seemed an eternity, teams then largely played in 4-4-2 or 4-5-1 formations, sitting deep, praying for an opponent’s mistake, a counterattack, a set play or, worst of all, a 0-0 draw. It was an era of horrific catenaccio-derived garbage where anything more than a 1-0 win was regarded as for the naive and idiotic.

Gradually Arrigo Sacchi’s AC Milan, Marcello Lippi’s Juventus and Louis van Gaal’s Ajax Amsterdam gave us back 4-3-3, gave us back pressing. They gave us back the attitude of “We’re coming to play in your half, and if you’re not technically excellent and quick minded, we are going to absolutely take you apart.” It was sensational.

So, pressing your opponent when not in possession and making the pitch big with daring positioning because you pass, accurately and thrillingly at lightning speed, wasn’t invented in 2008-09 by Pep Guardiola and Barcelona. But don’t you remember the impact? Don’t you remember the way in which already masterly footballers, like Andres Iniesta, Xavi, Samuel Eto’o and then Lionel Messi, looked like they literally controlled matches and won at will?

They not only robbed their opponents of the ball with mean-minded, humiliating high pressure, they gave the tactic a name: “the six-second press.” On the rare occasions Barcelona lost the ball, they exploded into pressing packs — made easier by Guardiola’s hawkish insistence on the team never losing the “correct” distance between each of its players, each line of the team.

Correctly positioned, they thus spent zero time grouping into those pressing packs. They’d invest a maximum of six seconds in attacking opponents’ possession and attempting to startle them or test their decision-making so that the ball was regained in places where the rivals became ragged and panicky.

They and the national team began their domination of European football, which was eagerly, aggressively and successfully taken up by Real Madrid. It’s a dominance that, truthfully, is only just relenting.

In the past few months, Villarreal won the Europa League and held the European champions to a 1-1 draw over 120 minutes in the UEFA Super Cup; Spain finished as European Championship semifinalists (beaten on penalties by the ultimate victor), won Olympic silver and the U21 team was also Euro semifinalists.

For some countries, that would have been enough for a week of national holidays, celebrations and the striking of a commemorative coin. Not Spain. Their technical skills, their stars, but above all their superior strategies — their pressing, passing and positional excellence — mean that between 2008 and now, LaLiga’s clubs and the national team have ruthlessly mastered the art of lifting trophies.

Since 2008-09, Spain produced seven Champions League wins and nine finalists. In the Europa League it’s been eight wins from eight finalists. European Super Cup? A win rate of nine out of 14. Of the seven European U21 Championships since 2008, it’s three wins, one finalist. There have been 13 Club World Cups since 2008; Spanish teams have won seven of them.

Somewhere in the middle of this, I remember interviewing Gines Melendez, responsible for the Spanish FA’s overall development of their rock-solid concepts, their ability to maximise talent and their winning mentality. The following day he was off to lecture at the relatively new St. George’s Park — home of English football’s brain trust.

I asked Gines: “Explain to me why you are going to share all your hard-earned, precious knowledge with an ‘enemy.'” He told me: “Because it’s healthy to ensure that knowledge sharing expands the game of football and, besides, by the time the English catch up we’ll have moved on by several stages again.”

Spain’s top two clubs, in European terms, are like King Canute trying to push back the tide — as it laps at their feet. Relying on pure technique, know-how and still fabulous technical skills, they nevertheless look slow, too small, either too old or too young, pressable, predictable and far too easy to outwork. There are hints of this in the national team, too.

Look at the signature defeats recently: Barcelona at home to Juve, at Paris Saint-Germain, at Liverpool, home to Bayern Munich … in Lisbon against Bayern; Madrid against Sherrif, in London against Chelsea, home and away against Manchester City; Spain’s first loss in World Cup qualifying for 28 years (!). There are more, and I’d have to include Atletico Madrid‘s painfully slow and pale defeats to Chelsea last season, plus the thrashing Real Sociedad were handed by Manchester United last February.

The linking factors are omnipresent. Rivals who are faster, taller, run more, press better and move the ball more swiftly. That was often the case when Spain, club or country, faced Northern Europe.

What has happened in the past couple of seasons is that Spanish football’s ability to pass, beautifully, around the “citius, altius, fortius” (“faster, higher, stronger”) football they’ve always faced during this golden era, has declined. In most cases now, Spanish football can’t out-press its rivals; it struggles to produce the same coordination, explosive laser-driven aggression, and often moves the ball more slowly once it’s regained anyway.

Meanwhile, English football in particular has amalgamated quite the cocktail of influences.

The initial flood of brilliant footballers heading overseas toward the end of their career has become a regular plucking of talented kids from the continent when they are in their late teens or early 20s. English kids are consistently coming through academy systems better coached and used to far better diets and rehabilitation; a powerful blend of the UK’s brand of football that has always been “We go to war,” with the technique, strategy and intelligence that they grew up watching when Spanish football was on TV.

There has now been a generation of the best coaches imparting their beliefs and tactics, sharing their science and ensuring that English football is now a hybrid: the best of us and the best of them. It’s heady, and it’s intoxicating.

Spanish football continues to produce greatness — or at least great players in the making — but now, too often, they are prised away young. Italian football has plucked Brahim Diaz, Pablo Rodriguez and Fabian Ruiz; English football, to name only a couple of brain drains, has snapped up Sergio Reguilon, Bryan Gil, Ferran Torres, Pablo Fornals and Robert Sanchez before any of them have made enough, or any, impact in their home country; Germany has Dani Olmo, Mateu Morey and Marc Roca. These are trends that are true across Europe.

Back in LaLiga, we can celebrate the emergence of Ansu Fati, Pedri, Gavi, Nico, Daniel Vivian, Oihan Sancet, Unai Vencedor, Antonio Blanco, Miguel Gutierrez and Martin Zubimendi. These are kids who are more than all right. But, unlike Sergio Ramos, Xabi Alonso, Sergio Busquets, Carles Puyol, David Silva, David Villa and Fernando Torres — plus Xavi and Iniesta — these kids are joining Spanish football at a time when it needs a major reset.

The country’s teams need to return to the high-risk brilliance of precision positional football and “keep ball,” drawing the sting from faster, taller, more aggressive opponents, or — like Sevilla, Villarreal and Atletico Madrid — aim for a hybrid of intelligence and technique blended with ultra-rigorous defending all over the pitch.

As for the national team, it is in a moment of rebuilding.

Injuries have stripped Spain of several who would have started at the San Siro against Italy, but they’re coached by a man who’s a total, absolute die-hard believer in all the philosophies that are central to the past 13 years of success: passing, pressing, positional football and trying to be the protagonist of every match in which they play.

Italy in Milan might be too rich for La Roja‘s taste buds right now, we shall see, but thank heavens for someone, in Luis Enrique, who’s one of the few not to have lost sight of precisely what made Spain the world’s dominant football force the past 13 years.