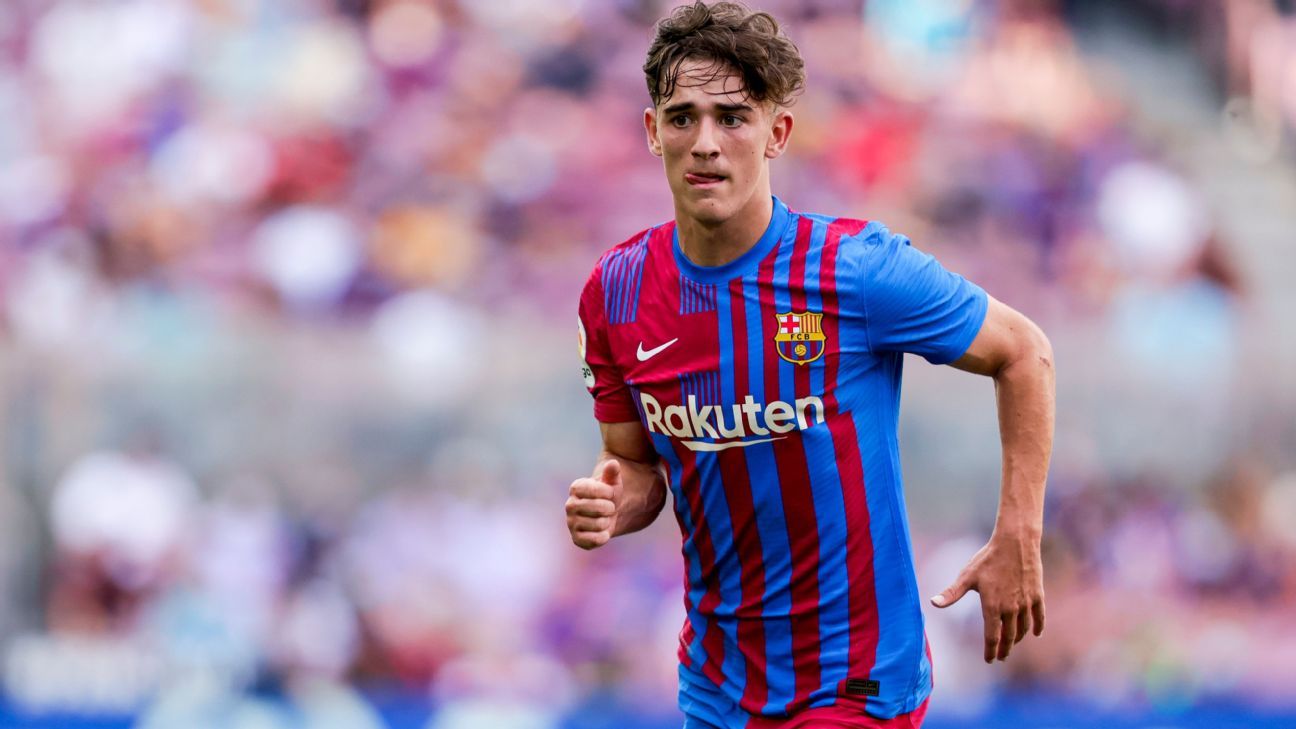 Paris Saint-Germain, Liverpool and Manchester United are keen on acquiring Barcelona‘s 17-year-old phenom Gavi after an impressive performance for Spain, according to El Nacional.

The three clubs are said to be monitoring the Catalan club’s rising star, who has a release clause of €50 million his contract.

But to warn teams away from the prospect, the Camp Nou giants are working quickly to offer new terms that will see the clause increased to a figure of €500m.

The former Real Betis youth midfielder has enjoyed a rapid rise since making his debut for the Blaugrana this season, where he has already become a starter.

He earned first cap for La Roja in Wednesday’s 2-1 win against Italy to send the side to the UEFA Nations League final, where it will face France.

08.00 BST: Jesse Lingard has said he is “not doing any harm at the moment” to his England career by staying at Manchester United.

The 28-year-old midfielder turned down interest from several clubs last summer, including West Ham United, where he spent the second half of last season on loan, to stay and fight for his place at Old Trafford despite the arrivals of forward Cristiano Ronaldo and winger Jadon Sancho.

Yet Lingard has started just once for United this season — in last month’s Carabao Cup third round defeat to West Ham — and turned down a contract extension, according to ESPN sources, amid concerns of a lack of playing time as he enters the final year of his existing agreement.

“Obviously, the World Cup is a long way away but obviously from last year, you need regular football,” he said. “I was so close to going to the Euros so, and I think obviously it plays a huge part and it’s a big factor. You know if you’re playing over 20, 25 games, of course you know you’re knocking on the door so I think it does play a big part in that.”

Asked if he was satisfied he would get that opportunity at United, Lingard replied: “I think I’m not doing any harm at the moment.

“If I keep performing well and doing well you never know what might happen so I keep confident in myself and when I get time on the pitch I’ve got to carry on doing what I’m doing.”

– Borussia Dortmund‘s last-ditch attempt to keep Erling Haaland for one more season looks to be unsuccessful, with AS reporting that the player is set to reject terms that would double his salary. The 21-year-old’s agent is already receiving proposals from around Europe for next summer, and the Norway forward is eager to begin the next chapter of his career elsewhere.

– Juventus are continuing their search for a No. 9 and could offer Mauro Icardi a return to the Serie A, reports Gazzetta Dello Sport. It is reported that the Turin club see the PSG star as an alternative to Dusan Vlahovic, who is attracting interest from around Europe as contract talks continue to stall. The 28-year-old ex-Internazionale man has three goals for PSG this season, most often featuring from the bench.

– Lazio are keen on acquiring Kepa Arrizabalaga, according to Corriere Dello Sport. The Italian club are searching the goalkeeper market with Thomas Strakosha‘s contract set to expire next summer, and the Chelsea star is seen as the ideal replacement. Lazio boss Maurizio Sarri previously worked with Kepa during his managerial stint at Stamford Bridge in 2019.

– Inter Milan will move forward with a deal for Gianluca Scamacca once Alexis Sanchez is offloaded, according to Calciomercato. The San Siro club have long remained interested in the Sassuolo star, but have been unable to make space for him with a plethora of options available in attack. The 22-year-old is also reported to be on the radar of Fiorentina, who could face a fight to keep hold of the aforementioned Vlahovic in the winter transfer market.

– Aston Villa will look to send Keinan Davis on loan in January, writes the Birmingham Mail. The prospect was linked with a move in the summer, but that didn’t materialise after the forward sustained an injury despite notable interest from sides in the EFL Championship. The 23-year-old striker has scored one goal in the Premier League after graduating from the club’s academy in 2016.