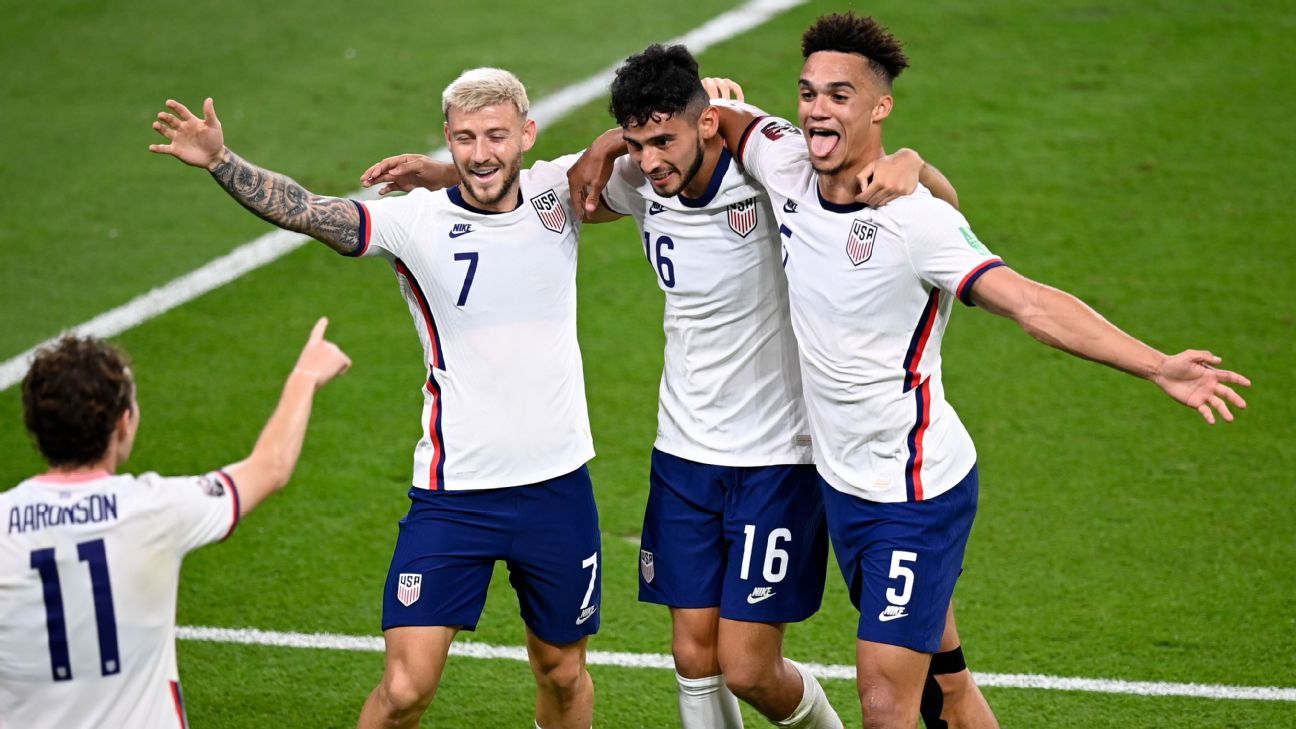 AUSTIN, Texas — In the 68th minute of the United States’ 2-0 win against Jamaica Thursday night, striker Ricardo Pepi looked to the sideline and saw his number on the substitution board. With his night over, he calmly trotted toward the bench and as he did the American fans at Q2 Stadium rose to their feet.

Some cheered wildly, others chanted his name.

Two months ago, the moment might have seemed fantastical and for Pepi it still likely seemed surreal. But after scoring two second-half goals to give the United States a commanding lead in an important World Cup qualifying match, Pepi earned his hero’s exit.

“It’s a special feeling being able to just score here in Texas,” Pepi said. “Not just here in Texas, but in front of our fans. It’s an amazing feeling.”

At 18 years old, Pepi became the youngest player in USMNT history to score in back-to-back games and the second youngest — behind only Christian Pulisic — to have a multi-goal game in a World Cup qualifier.

His play in the second half against Honduras last month rescued the United States after two draws to open the qualifying campaign and his performance in Austin ensured the opportunities will keep coming. The sample size is small enough to caution against overreaction, but Pepi’s emergence has been the most emphatic the team has seen at the position in years.

“We’re all excited,” Berhalter said. “For us, we’re just sitting there and we’re on the train. He’s an 18-year-old who gets an opportunity takes advantage. What you see and I think what I really like is that he has this instinct and it’s really hard to teach that to players.”

Pepi’s first goal came in the 49th minute and encapsulated why optimism about the future of U.S. Soccer has never been stronger. The play started with 20-year-old Barcelona right-back Sergino Dest passing centrally to 18-year-old Valencia midfielder Yunus Musah just over the midfield line. He drove the ball forward and as he approached the penalty box, he played it back out to Dest, whose cross found Pepi’s head to put the U.S. in front.

“I think he’s really grown into this striker that is just so deadly in the box,” Aaronson said. “He’s someone that’s always around. For a midfielder/winger, what I am, it’s a dream to play with a striker like him because you know he’s going to be in these spots.”

Musah was another player who stood out, making a positive impression in his first World Cup qualifier. He received an inconclusive COVID test Wednesday morning, leaving his availability in question until just the team dinner that night when Berhalter received the all clear. Out of necessity, Musah plays on the wing for Valencia but is more at home centrally, which is where he was deployed against Jamaica as part of a midfield three that also included Tyler Adams and Weston McKennie. His ability to progress the ball on the dribble is an attribute the team has lacked figures to play a major role for the rest of qualification.

With Jamaica at the bottom of the qualifying standings, it was the type of game the U.S. should have expected to win but there was still a resounding sense of satisfaction with the way the team played.

Even without star forwards Giovanni Reyna and Pulisic, both of whom are unavailable due to injury, the United States controlled Thursday’s game from start to finish.

In the game’s opening 20 seconds, Paul Arriola was played in behind by Pepi only to be pulled down by defender Kemar Lawrence about 12 yards outside of the penalty box. There was no one between Arriola and goal, resulting in shouts for a red card, but after conferring with the linesman, the referee — Reon Radix of Grenada, who was working his first World Cup qualifier — showed Lawrence yellow.

Radix was forced into another difficult decision in the 33rd minute when Aaronson was tackled from behind by Damion Lowe, inches outside the box and free on goal. Lowe appeared to get the ball cleanly but Radix’s decision made it clear he disagreed, which made it another curious decision when he, again, showed yellow.

The U.S. wasn’t able to make use of either resulting free kick, raising questions of why CONCACAF hasn’t made the necessary investment throughout the region to ensure VAR can be implemented in qualifying. It wouldn’t be an issue in any venue in the United States, where VAR has been used in Major League Soccer since 2017, but the lack of infrastructure in some member nations is preventative, according to the Federation.

McKennie’s return to the lineup was announced Wednesday and while he didn’t stand out, Berhalter was mostly pleased with what he called a “professional job.” After being sent back to Juventus early last window for violating COVID protocols, his reintegration into the squad was an important hurdle to clear as the team puts that chapter behind it.

Following Mexico‘s 1-1 draw with Canada, the United States is tied atop the qualifying standings with El Tri, as both teams have eight points through four games. The Americans will travel to Panama to play on Sunday, before returning home to close the window against Costa Rica in Columbus, Ohio, on Wednesday.