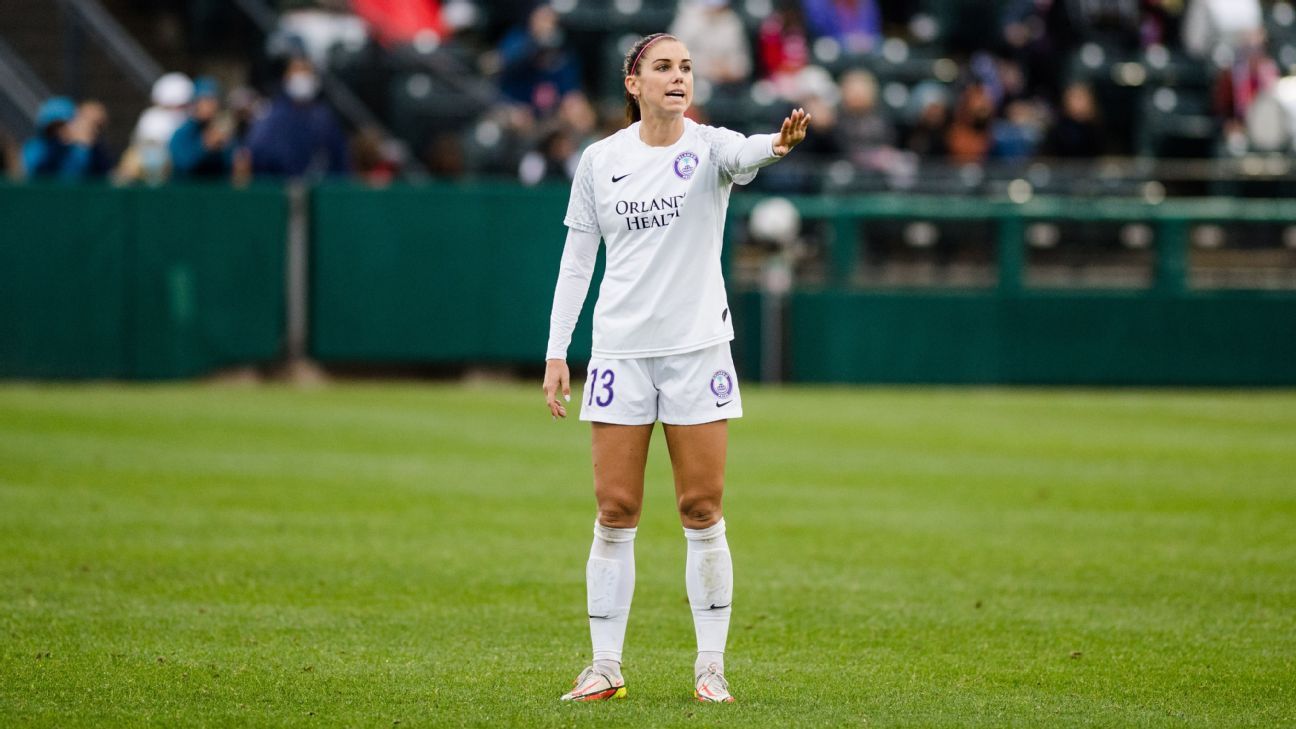 USWNT and Orlando Pride forward Alex Morgan has said women have been pulled away from playing soccer because of “failures” in how the system is set up for them but added that things are changing as players stand up to their employers.

Morgan was speaking after the Pride’s 3-2 defeat to NY/NJ Gotham on Saturday, which saw players stop in the sixth minute to show solidarity with women who said they had experienced harrassment and abuse in the National Women’s Soccer League.

Mana Shim, one of the women who came forward against former North Carolina Courage coach Paul Riley with allegations of harrassment and abuse spanning over a decade, joined Morgan on the pitch during the minute’s silence.

“That moment was heavy. I think the whole match was heavy and obviously it was just amazing to have Mana here and just be able to be here with her during this time and show our support for her,” Morgan said.

“I think it’s just important to note that we have stood up for the failures of our employers. The people that have put things in place for us, it wasn’t set up for success. For us players, all we want to do is play the best soccer in the U.S. We want to play soccer for a job, and we want to love playing it, too. That’s not the case when you’re being pulled away from that because of those failures, because players’ careers have ended due to harassment or abuse, to certain levels.

“So, as tough as it is to feel like you’ve pulled away from soccer due to that, I think as much support as we can give for the women who have endured that, and who are enduring that right now, is extremely important. It’s important for us to stand up for ourselves and be vocal about it.

“I think that’s kinda of what we’ve shown in the last two weeks. It’s something that I’m really proud to be a part of because I think that the players have been more unified than ever before in these last nine years, and I hope that positive change comes out of it. I’m really optimistic with how the players have responded but there’s also so much work to do. I hope that in the future we’re set up for success.”

Morgan had called for transparency from the NWSL after it had released a statement in support of Shim and others who had come forward with allegations against Riley.

She released screenshots of emails between one player, Sinead Farrelly, and former commissioner Lisa Baird from April in which Farrelly had asked the NWSL to reopen a 2015 investigation into Riley. Baird refused the request.

Baird subsequently stepped down from her role and investigations are ongoing into the allegation claims across a number of clubs by the NWSL, FIFA and the U.S. Soccer Federation.

On Saturday, the NWSL Players Association reiterated a list of demands that they wanted to see from the NWSL and its clubs, giving them until Oct. 13 to respond.

Clubs in England including Chelsea, Liverpool and Sheffield United showed solidarity with players in the NWSL by linking arms prior to their games on Saturday and Sunday.