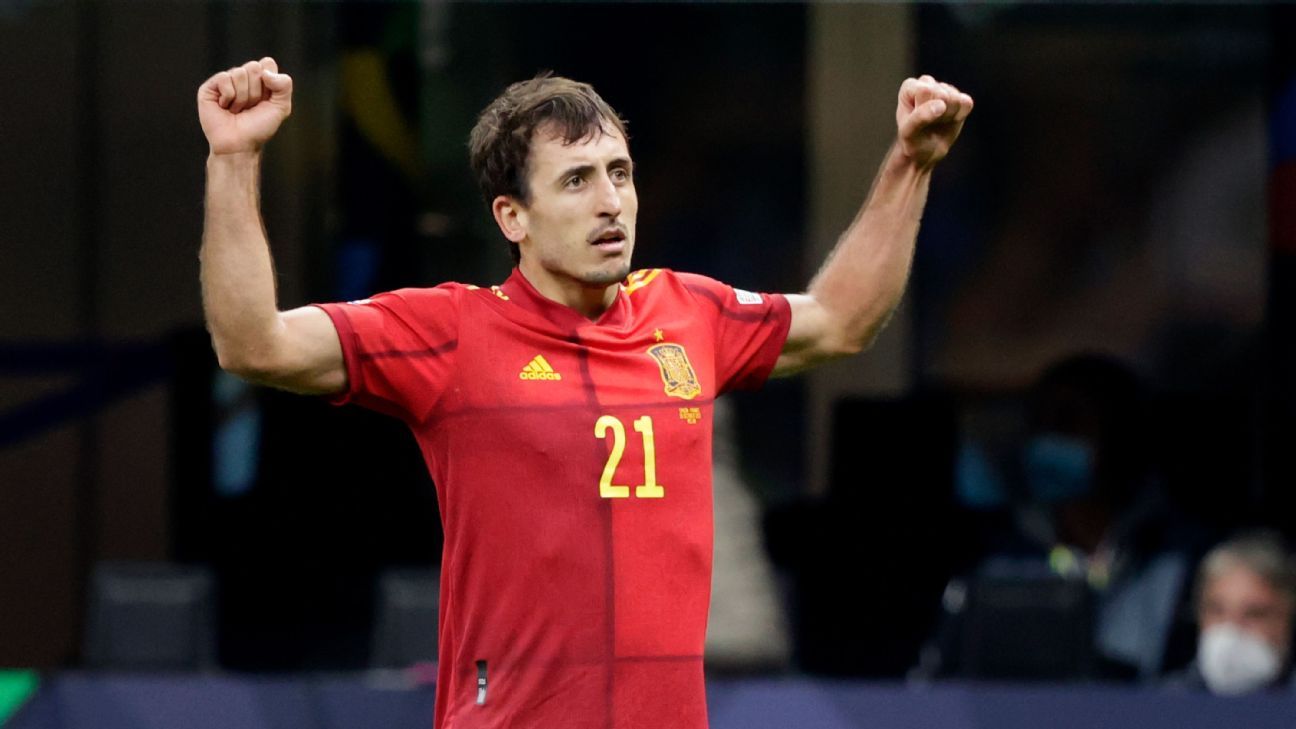 Though they ended the tournament with a runners-up medal, the UEFA Nations League finals confirmed without a doubt that this is the era of Baby Spain.” Recite the names Gavi, Pedri, Yeremi, Ansu and Ferran, and they may sound like JRR Tolkein characters to accompany Frodo or Bilbo with sword, loyalty and cynical good humour; in reality, they don’t mine for precious stones. They are the diamonds.

But each of these prodigies — the youngest just turned 17, the eldest only 21 — will do extremely well if, by the time they turn 24, they’ve achieved for club and country as much as “elder statesman” Mikel “Bigfoot” Oyarzabal has.

Oyarzabal’s two glorious assists in the semifinal, and goal in the final, against the European and World champions respectively, not only keep him on track for a ridiculously successful year — they mark him down as prime Basque beef. Clubs, not least Manchester City, are going to come calling. Again.

This calendar year alone, Real Sociedad‘s captain has scored the winning Copa Del Rey final goal against his club’s most bitter rivals, Athletic, to win their first silverware for 34 years. He scored the winning penalty to put Spain in the Euro 2020 semifinal having clinched the previous game, against Croatia, by adding Spain’s fifth goal against the World Cup runners-up.

It doesn’t stop there. Not even close. He scored in the Olympic final, and set up two glorious Ferran Torres goals against the European Champions with assists that were seemingly carved from heaven. Then he put La Roja 1-0 up against reigning World Cup champions France in Sunday night’s Nations League final before forcing Hugo Lloris into a masterful save that prevented extra time.

Oyarzabal and his club, La Real, sit joint-top in LaLiga and of their 17 points, Oyarzabal’s goals have, on their own, been responsible for 10.

This guy, who’s already won the hearts of the blue-and-white-faithful 100 times over — not least for twice turning down vastly lucrative offers to cross the Basque divide and play for Athletic Club — has scored double figures from the left wing in each of the four previous LaLiga seasons (he’s not 25 until April, 2022) and his penalty conversion rate, 22 out of 25 attempts (88%), is up there.

Nicknamed “Bigfoot” because he squeezes those talent-blessed feet into size 13 boots, Oyarzabal was given his Real Sociedad debut, aged 18, by David Moyes in a 4-0 win at Levante. Say anything you wish about the West Ham manager, but he’s always had an extremely acute eye for talent. In the same Real Sociedad team that October afternoon was Inigo Martinez who, just over two years later, did the “unthinkable” for La Real supporters and went to hunt with Los Leones in Bilbao instead.

Eight months on from pinching their central defender, Athletic earned that jaw-dropping €81m transfer fee from Chelsea for Kepa Arrizabalaga and were achingly keen to hurt their Basque rival by ripping Oyarzabal away from Anoeta, too. Not only did the striker reject the very thought, but he insisted there be a higher buyout clause for Athletic than any other club. Nevertheless, the main predator for this aquiline, born leader has been Manchester City… at least until they spent €110m on Jack Grealish.

City’s Director of Football, Txiki Begiristain, was once in precisely Oyarzabal’s position.

A superb, tenacious winger at Real Sociedad, and scorer of the goal that helped ensure that the club won its last Copa Del Rey before Oyarzabal’s penalty-winner last April in the final, Begiristain and La Real‘s captain were born 30 minutes (albeit 33 years) apart. Begiristain, aged 24, was drafted into the birth of Johan Cruyff’s Dream Team at Barcelona and became hugely successful, a leader without the armband; he’s since crafted two hyper-successful eras as a Director of Football at Camp Nou and then at City.

It was Captain Bigfoot’s “no thanks” a couple of seasons ago when City asked about him, and La Real, if he fancied joining the Sky-blue party that catalysed Begiristain and Guardiola signing Ferran Torres instead. In the end, Grealish’s lavish transfer, adding creativity and magic down City’s left, happened because Oyarzabal still wasn’t ready to leave La Real.

Whether Guardiola and Begiristain exchanged exasperated, frustrated texts on Wednesday night when Oyarzabal gifted Ferran Torres those two exquisite assists is not a matter of record, but you can guess. You know you can.

One of the reasons, apart from loving the captaincy, the responsibility and the sense that there may be more trophies to come for Real Sociedad and his mega-projection on the international scene with Spain, that Oyarzabal is presently content to play his football in San Sebastian rather than anywhere else in the world, is David Silva.

This growing icon of Spanish football was born in Eibar, a little town of 27,000 inhabitants in the Basque Country where the “miracle club” (stadium capacity: 8,000) stayed in LaLiga for seven consecutive seasons until relegation last May. Growing up head over heels in love with his local team, Oyarzabal was taken to watch them in 2004 when he was seven and Silva was at Eibar on loan from Valencia for 34 honey-sweet matches.

“I’ve got a fantastic memory of seeing him,” Oyarzabal explained during Euro 2020. “As soon as my dad watched a match where David played for us, he told me ‘this guy has something completely different: he’ll be here for maximum one season and he’ll be gone. We have to enjoy him.’ And so it was, and the rest of his career has been the same. So much enjoyment, and now I’ve got the privilege of sharing the same dressing room as him. I want to keep learning and, hopefully, winning together.”

Silva hasn’t been at La Real long enough to attribute too much of Oyarzabal’s excellence to the Canary Islander, but perhaps this sprint to potential greatness over the past calendar year has some roots in what he’s soaked up from the European Championship and World Cup winner.

In Oyarzabal’s case, we’re dealing with someone who’s bright, is dedicated to bettering himself and is far more than the product of how well he can control a ball, sprint or even tuck goals away. Until relatively recently, he was studying for a qualification in his spare time, simply determined to have another string to his bow.

And he’s an articulate voice.

“Often people only see the beautiful side of football, but behind the facade, many of us suffer,” said Oyarzabal during Spain’s Nations League run. “There’s no question that we’re privileged to be able to do what we love, but it can be a solitary life — it can cause a release of emotions in good or bad times, which cause tears.

“Here in Spain, we became a little over-accustomed to victory. Many just assumed it was far, far easier than it actually is. That golden generation which preceded us made it appear that we should be getting to a final and winning all the time. Success hypnotises the fans a little bit.

“I guess it’s better to grow complacent because of an era of success than never experience the success, but now that we are trying to match their achievements, all of us in the squad realise, acutely, exactly how hard one has to work to achieve international success. Or that any so-called smaller national team can give the ‘favourites’ a fright.”

For now it’s “back to Basque-ics” for Oyarzabal. La Real are unbeaten in Europe so far, they face champions Atleti in a blockbuster Metropolitano match the day that Barcelona and Madrid stage the Clasico. It’s a heady time domestically.

But with the embers of defeat in Milan dying down, Spain’s business isn’t done this calendar year. In a month, Oyarzabal — “let’s see whether I’ve done enough to be selected for the next squad” was his take on it after the France game on Sunday night — and Spain face must-win matches away to Greece and then at home to Sweden in order to avoid having to go through the World Cup play-off lottery in March.

If “Bigfoot” is in this same rich form, then future opponents had better watch out. This one is special.