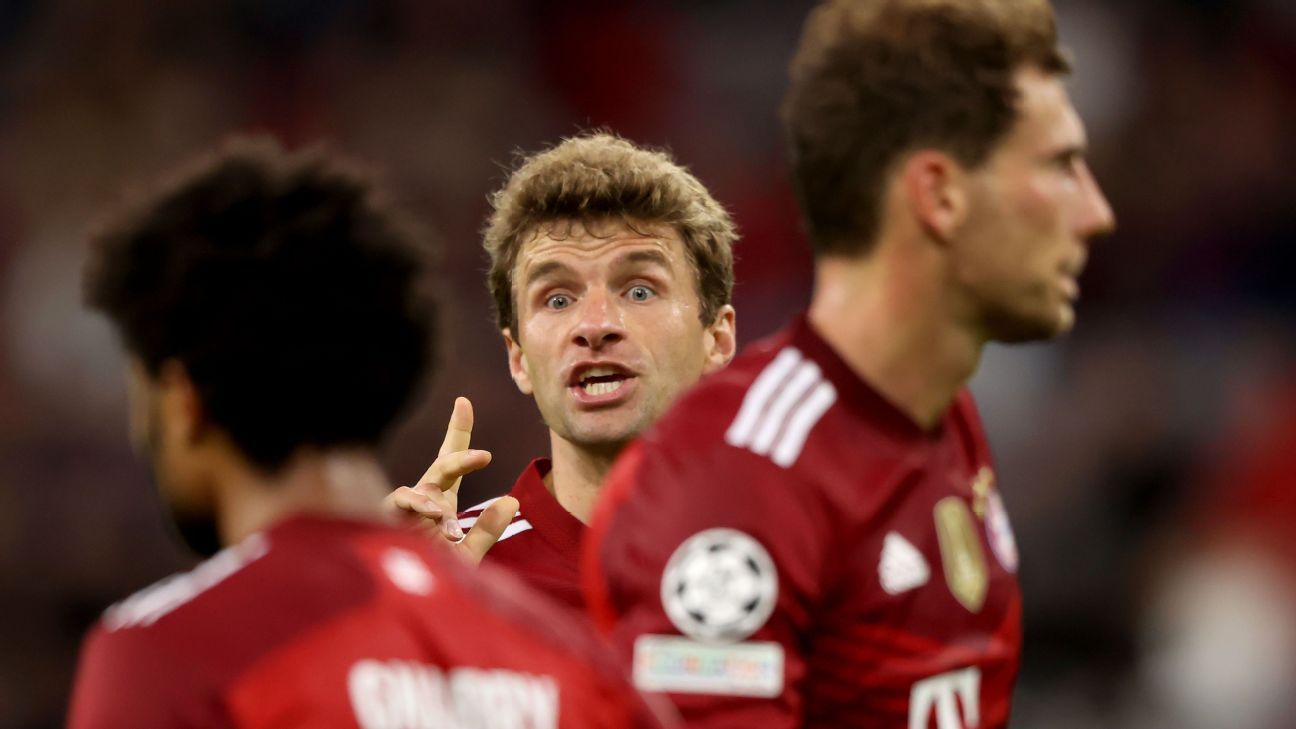 Thomas Muller has a penchant for handing out nicknames, from “Lewangoalski” (Robert Lewandowski) to “Roadrunner” (Alphonso Davies). But in the Bayern Munich dressing room, he’s known as “Radio Muller.”

That nickname was coined by ex-Bayern assistant coach Hermann Gerland due to his unrelenting on-field communication with his teammates, opponents and referees. Bayern Munich themselves ran a video of his best soundbites in June, but his continuous chatter is no joke. Muller’s vocal side gives us a window into how he has become so important for both club and country.

Now in his 14th season as part of Bayern Munich’s first team, Muller’s ability to tweak his game over time has seen him remain as important as ever under new boss Julian Nagelsmann. The 32-year-old’s Bayern Munich career to date is remarkable, but his own unique skill-sets and positional intricacies take a certain manager to a) understand what he offers and b) find a system where he can dictate the tempo of the match either with or without the ball. So far, it’s clicked with Nagelsmann.

“He’s got outstanding quality and was always one of the most difficult players to prepare to face as an opponent, because you just can’t pick him up because he’s got this incredible feel for space,” Nagelsmann said in preseason. “He’s always driven to play all the time and be the best, so why should I do without a player of such quality?”

Muller, who in 2011 gave himself the moniker of Raumdeuter (roughly translated as “interpreter of space”) when asked about his position, told ESPN: “My best position was starting in the middle… during the game, my position changes a lot. I try to get in a nice position to receive the ball, to create space for my teammates who are receiving the ball — in former times, I had a good relationship with someone like Arjen Robben, so when he received the ball, I did my movements to make space for him and sometimes he’d put the ball into the space where I’m running. Then the game changed a little bit — my teammates changed a little bit.”

As Bayern Munich prepare to face Bayer Leverkusen on Sunday — stream LIVE, 9:30 a.m. ET, ESPN+ (U.S.) — Muller will meet with the future of German football in Leverkusen’s 18-year-old attacking midfielder Florian Wirtz. The two played alongside each other on international duty over the past fortnight, but over his 21 years at Bayern Munich, Muller has seen these hot prospects come and go, just like his teammates. So how does he do it?

Deciphering Muller’s on-field advice is easier than picking apart his own positional evolution, as much of it is down to his own instincts, how he manages to draw players out of position, and the understanding he’s built up with those around him. He’s a “glue” player, but one who has shifted positions according to whichever manager he’s with. Under Jupp Heynckes (2011-2013 and 2017-18) he was used more on the right of the attack, but when Pep Guardiola took charge, he shifted Muller into the middle.

It didn’t always click: Niko Kovac’s system (2018-19) did not play to Muller’s strengths and while Carlo Ancelotti (2016-17) rated Muller, the two never worked in harmony. “He’s atypical because he’s a great forward with an unorthodox skill set,” Ancelotti told ESPN back in 2017. Ancelotti said rather than having the typical attributes of a forward, Muller’s strengths were tactical — it was his ability to “read the game [and] to fill the right space at the right time” that made the difference.

His Raumdauter method of attacking play clicked under ex-Bayern Munich manager and now Germany coach Hansi Flick, and it’s working again under Nagelsmann. At 32, Muller is just as important to Bayern as he’s ever been.

Muller has been used a little more on the right of Bayern’s attack under Nagelsmann — in part to help young right-back Josip Stanisic and make-shift option Niklas Sule, but also to help guide winger Leroy Sane back to his best. Ideally, Muller sees himself playing more centrally.

“Nowadays, I have the ball more often at feet, so more contact with the ball but a little less shooting actions in the box and around the box — my best position is in the central role,” Muller told ESPN. “I always try to come close to the goal with the ball and without.”

This shift has helped Bayern get their season off to a strong start with five wins from seven, rebuking critics who predicted a difficult transitional period for the club as they went from Flick to the 34-year-old Nagelsmann.

“We have a system and players and the basic elements for this success we built in the last two years with Hansi Flick, and now Julian Nagelsmann comes with some details and new ideas, we are open to that and we try to adapt. Nagelsmann is a very good coach,” Muller added. “He has very good ideas in how to play and defending in football games. He has ideas for offence, and defence. Football at this level, it’s the details. Every player knows how to play football but as a team together, the right positioning and right moments: there is a big difference, and that’s the key.”

Muller said the start of the season has been “great” for Bayern, emphasising the brilliant “spirit in the team,” but also that “the most important thing is our behaviour on the pitch, our combinations and our fire to fight for offence.” He’s managed four goals and six assists across 11 games for Bayern, and this form — as well as his understanding with Flick — means he is integral to his Germany side. “You can’t always grasp his playing style, but you can’t quantify what he brings to the team and the club either,” Flick recently said of Muller.

Germany were the first team to qualify for the 2022 World Cup on Monday thanks to their 4-0 win over North Macedonia, but that step was made possible by Muller’s late winner against Romania in the previous game. Just like at Bayern, the Germany side has the spine of experience in Manuel Neuer, Joshua Kimmich and Leon Goretzka, with that sprinkling of the new generation in Bayern Munich’s Jamal Musiala, FC Salzburg’s Karim Adeyemi and Bayer Leverkusen’s Wirtz. Muller slots neatly into the middle of it all, with the younger players benefiting from him. Kai Havertz, 22, said back in July playing alongside Muller is like having a “third assistant coach.”

So what’s next for Muller? Could he go right into management? Former Germany striker Mario Gomez said in September that he expects Muller to become a Jurgen Klopp-esque manager, and Nagelsmann — just two years older than Muller — said the Bayern forward “can implement our instructions incredibly intelligently… he has the gift of coaching.” For his part, though, Muller himself isn’t ready yet.

A prime example of “Radio Muller” came in the DFB-Pokal final against Bayer Leverkusen in 2020, a game Bayern would go on to win 4-2. One passage of play saw Muller receive a throw-in on the edge of the Leverkusen penalty box and, without looking, flick it back, expecting Kingsley Coman to have made the inside run. Coman instead stood still, planning on a pass to feet and the move broke down. “King! I’ve been playing that ball for 10 years,” he shouted.

Muller’s on-field commentary was stark when the stands were empty due to the pandemic, and he was asked about this while on international duty last week. “I’m someone who is more confident in addressing others. I try not to come across as lecturing, but to pass on pertinent information. In general, I try to implement that on the pitch,” Muller said. “There is also positive feedback. I’ve heard that I infect games with it. I also demand that I get commands from other players.”

And herein lies the secret behind why Muller is still indispensable. It’s his inherent football understanding and his communication in part, but it’s more about how he anchors himself in the present and trusts his own instincts for how best to position himself both on and off the field. Muller may extend his Bayern Munich contract beyond 2023, but for a man who can always find time and space on the football field, he’s doing everything at his own pace.

“My plan is to always think, what is the best for tomorrow,” Muller said. “That’s the most important plan. When you plan for the next two or three years, when you’re honest to yourself: you know you can plan, but life will be going different to the plan. I’ve had no career plan — my only plan was to play as good as I can and improve, and play year for year, day for day.

“[But] to play so long for this big club, I’m very proud of this that my body and football skills are still that good to play for this club and go for the biggest titles you can reach.”