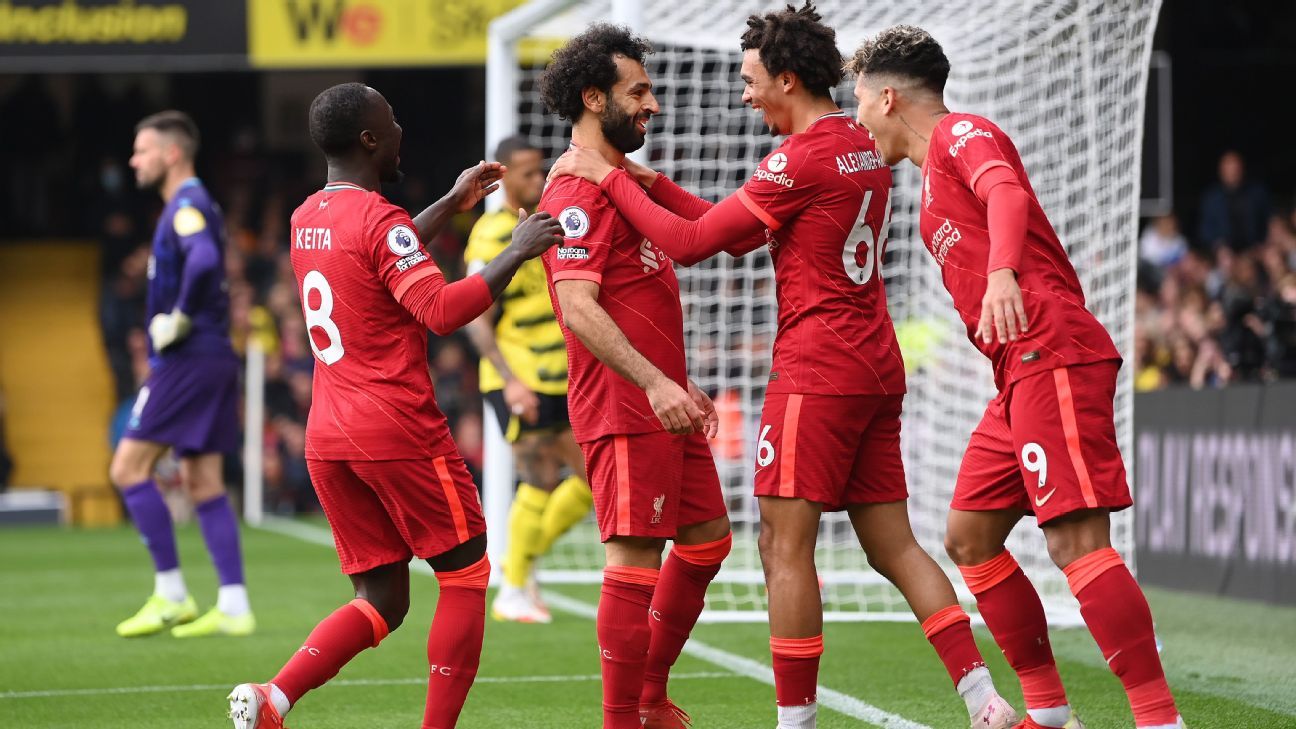 Liverpool moved to the top of the Premier League on Saturday, thumping Watford 5-0 in Claudio Ranieri’s first match in charge of the Hornets.

Sadio Mane, Roberto Firmino‘s hat trick and a stunning goal from Mohamed Salah ensured a fine afternoon for Jurgen Klopp’s men, who wrecked Ranieri’s big day after he took over from Xisco Munoz.

Klopp, who took over as Liverpool manager six years ago this weekend, made four changes from the 2-2 draw against Manchester City last time out, with Alisson and Fabinho among those missing after they played for Brazil early on Friday morning. Caoimhin Kelleher started in goal for the visitors but had very little to do as Klopp’s side continued their strong start to the campaign with a commanding win.

– Stream ESPN FC Daily on ESPN+ (U.S. only)
– Don’t have ESPN? Get instant access
– Notebook: The latest inside stories around the world

Liverpool looked in control from the first whistle and it was no surprise to see Mane finish off a superb move in the eighth minute, finding the net with a first time strike after an outstanding pass from Salah. The goal marked Mane’s sixth of the season and 100th in the Premier League.

Klopp’s side are unbeaten in 18 league games and never looked remotely likely to surrender that record at Vicarage Road, with Salah forcing Ben Foster into a flying save soon after Mane’s opener, before the Watford keeper came out quickly to deny him again.

Ranieri made three changes to the Watford side that lost against Leeds in what turned out to be his predecessor’s final match in charge but the Italian cut a frustrated figure at times with his new side very much second best. Indeed, after 20 minutes, Ranieri’s men had only completed 19 passes to Liverpool’s 206.

James Milner then found Firmino inside the area following another flowing team move and he made no mistake with the easiest of finishes from close range to double Liverpool’s lead on 37 minutes.

With no shots on goal and 17% possession in a frankly dreadful first half, Watford were lucky to go in at the break 2-0 down. It got worse six minutes after the restart when Firmino scored another tap-in after Foster spilled the ball in the area.

Salah then slalomed through a mix of desperate Watford defenders and curled in a fine fourth with a goal of the season contender, and Firmino tapped in the fifth inside the six-yard box in stoppage time.