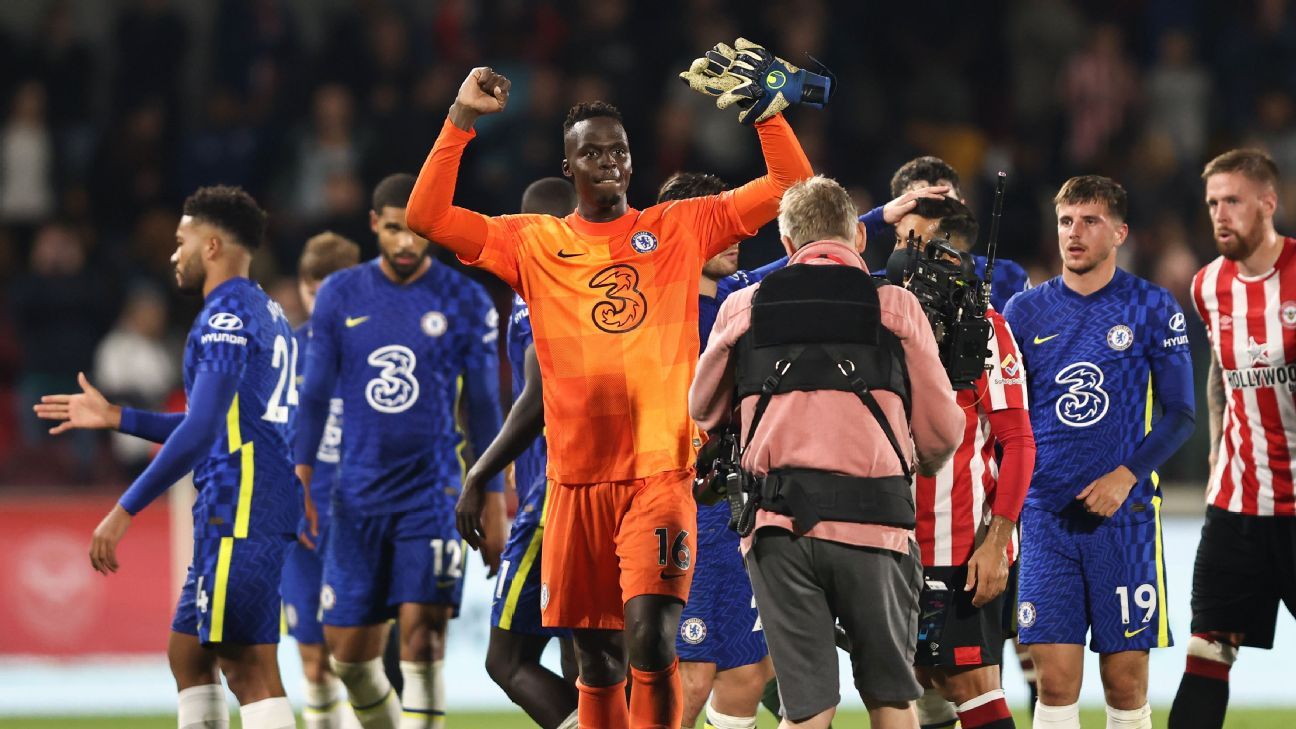 BRENTFORD, England — Time will tell whether this was the sort of fortuitous win carved out by Premier League champions or a result to mask their shortcomings, but Chelsea’s defensive record continues to be the foundation of Thomas Tuchel’s success. Brentford defied their newly-promoted status to dominate the second half of Saturday’s encounter and were desperately unlucky to lose 1-0 on a night when they registered seven shots on target and shook the European champions in a manner rarely witnessed under Tuchel.

While other players on the team let Chelsea down — chiefly another off night for Timo Werner and Romelu Lukaku — goalkeeper Edouard Mendy proved the match-winner with a series of fine saves amid the bedlam Brentford created through a chaotic finale.

Goalscorer Ben Chilwell summed it up best. “It was pretty much hell on earth for the last 20 minutes,” he told Sky Sports. “We have got Edou to thank, he’s amazing.”

Chelsea’s defensive problems on the eve of this game were well-telegraphed given Antonio Rudiger returned injured from international duty with Germany and Thiago Silva was unable to take part after playing 90 minutes for Brazil on Thursday night.

Tuchel’s solution was to hand Malang Sarr his first Premier League start alongside Andreas Christensen and Trevoh Chalobah, with Chilwell and Cesar Azpilicueta operating as wing-backs and Ruben Loftus-Cheek assuming the Jorginho role at the base of Chelsea’s midfield. What followed was perhaps a predictably disjointed display from a makeshift side, including a curious first half in which they struggled to make efficient use of the ball while both Werner and Lukaku wasted presentable opportunities to tilt the game in their favour.

It required Chilwell to fire home his third goal in three matches for Chelsea and England, continuing his personal renaissance, to give the Blues something to hold on to. And hold on they did, requiring all of Mendy’s poise in a second period during which Brentford threatened to overwhelm the visitors on several occasions.

Bryan Mbeumo hit the post in both halves, the second time after 75 minutes after which Mendy’s goal resembled the Alamo. Substitute Saman Ghoddos had a shot saved before Chalobah cleared off the line from Christian Norgaard. Pontus Jansson was then denied from point-blank range as Mendy charged out to take his shot full in the face. Norgaard then had a brilliant overhead kick tipped over as Mendy continued to repel everything thrown at him, securing Tuchel’s 25th clean sheet since taking over from Frank Lampard in January.

That figure is higher than any other team in Europe’s top five leagues during the same period and remains the basis upon which Chelsea will build their title credentials. This was the first clean sheet since Sept. 19, since when they needed penalties to beat Aston Villa in the EFL Cup before losing to Manchester City and Juventus.

Any judgement based on this performance should take into account just how well Brentford played — they have already beaten Arsenal and drawn 3-3 with Liverpool here, with Saturday marking only their second Premier League defeat — and the leveller that often is the first game back following an international break. But Tuchel will know they need to improve rather than expect to accumulate points by relying on their goalkeeper’s heroics, a performance so outstanding that it led Rudiger within minutes of the final whistle to question why Mendy did not join the five other Chelsea players to be nominated for the Ballon D’Or.

“They put a lot of free-kicks, corners and throw-ins into your box, so it was a constant threat. In the last 20 minutes, the match turned into a cup game: they took a lot of risks and we could not keep them away from shooting and having the big chances. Edou was absolutely decisive to escape with a clean sheet.”

Chilwell’s goal marked a third strike in three games for Chelsea and England, another step forward in his revival after a difficult summer in which he was an unused member of Gareth Southgate’s England squad at Euro 2020. Tuchel admitted that period had left Chilwell “mentally tired,” but he has seized his opportunity for club and country in the last fortnight.

“I was very honest with you guys, I felt him a little bit tired, mentally a bit drained and it needs time,” Tuchel said. “He got his chance against Southampton [prior to the international break]. He was able to score and play for England [against Andorra] which gave him more confidence and today he was strong again, in good shape.”

Chilwell’s contribution at the top end of the pitch — and Mendy’s at the other end — were so pivotal because Werner and Lukaku’s development as a strike pairing faltered once more. There was a moment midway through the second half that summed it up best. Werner scuffed his effort when well-placed in the middle of the box. The rebound fell to Lukaku, who side=footed over from even closer. An offside flag spared their blushes, though the pair are enduring a difficult period which can make games like this more fraught than necessary.

In the end, Mendy saved the day on Saturday, and not for the first time.