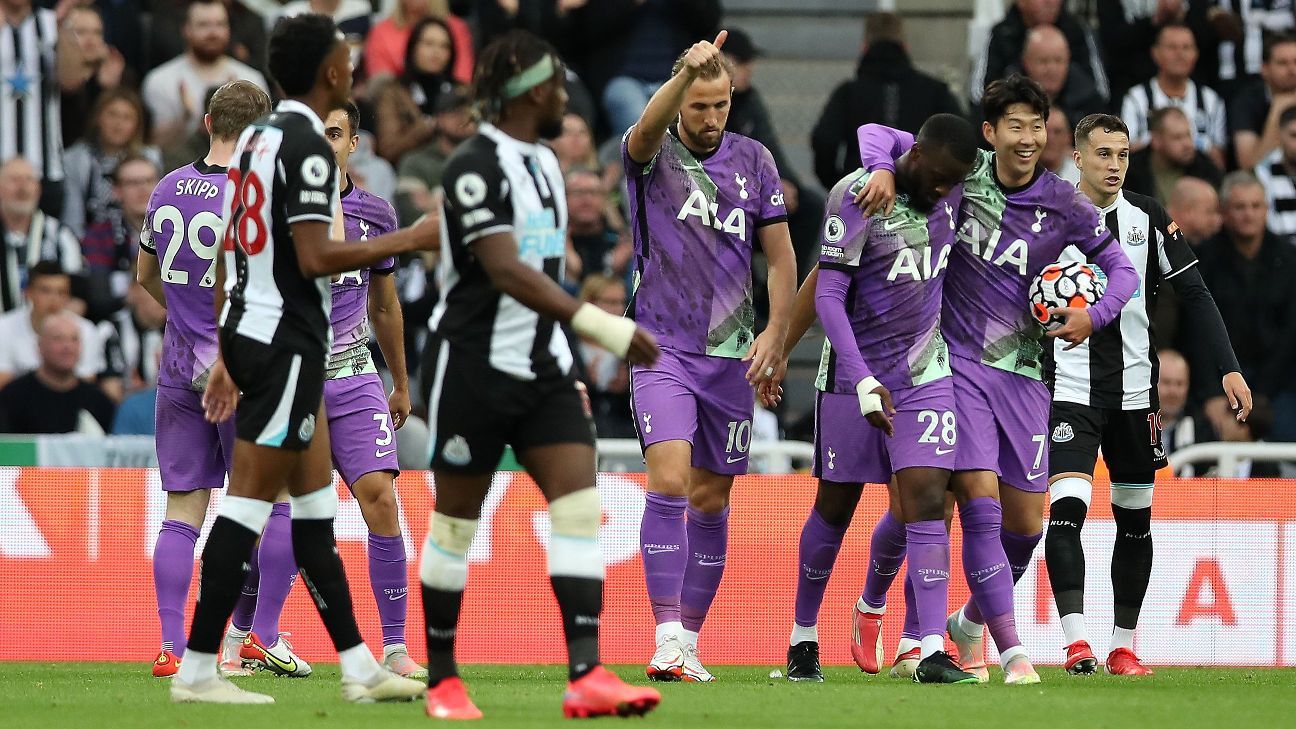 NEWCASTLE, England — U2’s Beautiful Day played over the public address system at St. James’ Park before kickoff and Newcastle supporters greeted new chairman Yassir Al-Rumayyan with a deafening roar as he took his place in the directors’ box but, by the final whistle, it was a case of “new owners, same old story,” as home fans called for Steve Bruce to be sacked after Tottenham‘s 3-2 win kept their team in the Premier League relegation zone.

The dismissal of substitute Jonjo Shelvey for two yellow cards in the space of 23 second-half minutes only served to add to the sense of this Newcastle team showing its true face to the new owners, who can be in no doubt as to what they must do simply to make the club competitive in the Premier League.

As for Bruce, this was his 1,000th game as a manager and he will not remember it fondly. Managing his hometown club has been a two-year ordeal and, though he was defiant after the game — “I’m never gonna chuck it when we’re in the bottom three” — the 60-year-old will not be in charge for another, if supporters get their wish.

Harry Kane, who missed out on a move to Manchester City due to the champions’ refusal to meet Tottenham’s valuation, scored with a sublime lob and created a goal for Son Heung-Min as Nuno Espirito Santo’s side recovered from their early setback from to claim a victory that was more emphatic than the final score suggested.

In time, Newcastle might attract world-class players such as Kane if the club’s new owners invest the funds that many expect them to plough into the club, but there will be no quick-fix. Senior figures in the have spoken of winning a trophy within five years and going on to challenge for the Premier League title, but the majority of fans accept it will take time to compete again.

The joyous scenes that greeted PIF’s takeover were as much about the exit of Mike Ashley than the arrival of wealthy new owners. The hope among is that Newcastle go from bust to boom and a huge banner, unfurled by fans on the Gallowgate End, was testament to that.

Quoting the lyrics of Jimmy Nail’s “Big River,” it said” ‘”‘Cause this is a mighty town, built upon a solid ground. Everything they’ve tried so hard to kill, we will rebuild!”

This is a team and club that needs to be rebuilt from top to bottom and Bruce’s squad was highlighted by a lack of quality, pace and belief after the euphoria melted away once Tanguy Ndombele cancelled out the opener by Wilson, who succinctly summed up his side’s day after the game: “We started great but things went downhill from there.”

Newcastle have not won a league game since the final day of last season and it showed against Spurs, who had taken control before play was halted just before half-time due to a medical emergency when a supporter collapsed and was subsequently taken to hospital.

Both sets of players took time to rediscover their intensity after the unscheduled pause, but Spurs remained the dominant force and extended their lead through Son after he was teed up by Kane’s pass. Shelvey’s eventful cameo followed and Newcastle did get some late hope via Eric Dier’s own goal, but the result was never in doubt.

The final whistle brought with it boos and the reminder that a major overhaul is required at Newcastle. Every position requires strengthening — they could dearly use a striker of Kane’s class, for example — but the problem for the new owners is that no top player will choose to pull on the black-and-white until major trophies are a possibility.

Moreover, there is the question of who is given the job of overseeing the rebuild. Bruce said afterward that he “will carry on as best I can until I hear otherwise,” adding that his new bosses have “conducted themselves respectfully since they came in,” but the likelihood is that he will soon be replaced.

In 2027, it will be 100 years since Newcastle’s last English top-flight title and it could take at least until then to rival the likes of Manchester City, Liverpool and Chelsea. At least the fans are happy again, even if they have to endure more days like this before they can play Beautiful Day again with conviction.