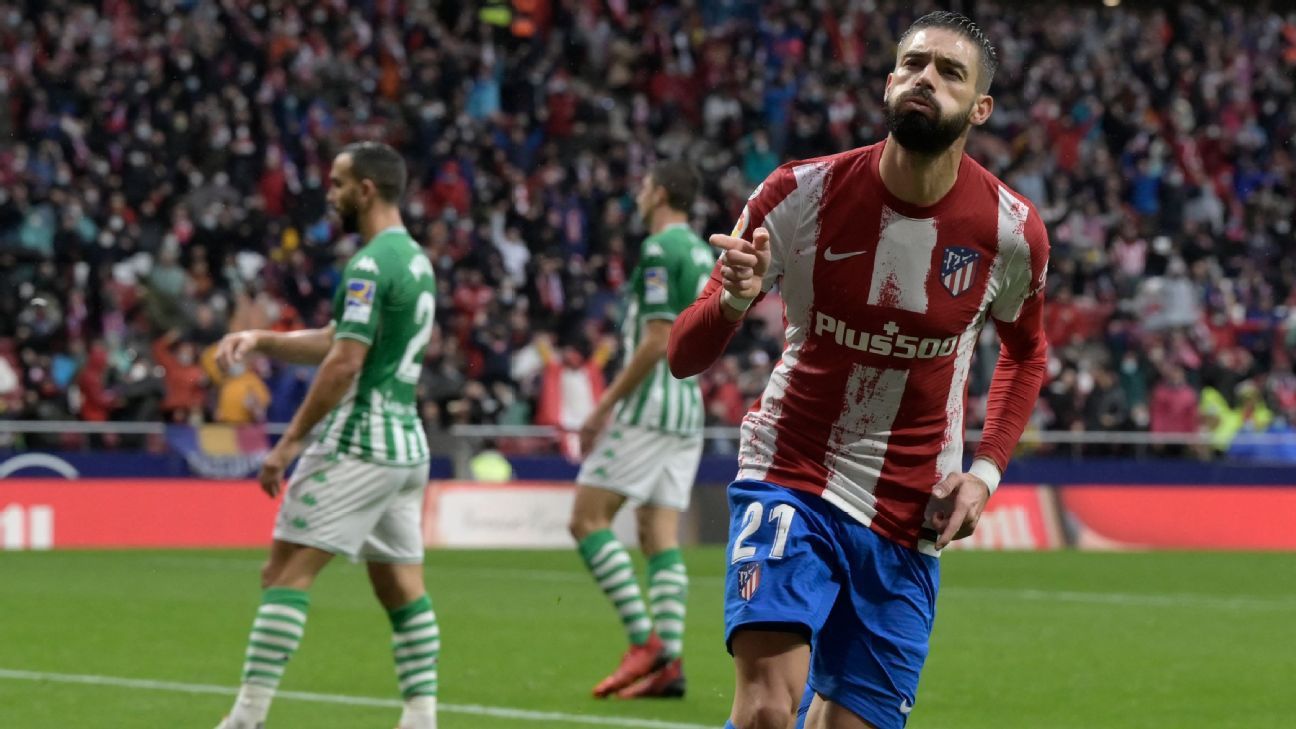 Atletico Madrid returned to winning ways in LaLiga on Sunday with a dominant 3-0 home victory over Real Betis that helped them leapfrog their opponents into fourth place in the table.

After two consecutive draws in the league, Atletico had one of their best games of the season against Manuel Pellegrini’s side, who had been hoping to stay in the fight to top the table after three straight wins.

Yannick Carrasco scored the opener with a phenomenal shot halfway through the first half, before Atletico doubled their lead just after the hour when Betis defender German Pezzella headed a corner kick into his own net.

Substitute Joao Felix sealed the deal, finishing a late counter-attack with a fine shot from the left past the keeper and into the far corner.

Atletico rose to fourth place in the table on 22 points, two behind leaders Real Madrid, Sevilla and Real Sociedad, who play on Sunday night against Athletic Bilbao. Betis slipped one spot to fifth on 21 points.

“We are happy not only for the win but to do it without letting them score. They are one of the best teams of the season and we have to take advantage of the momentum that built today to go forward fighting for the title,” Carrasco told Spanish TV after the match.

It was a dominant display by Atletico under heavy rain at the Metropolitano Stadium and Diego Simeone’s side could have won by a larger margin were it not for some goalkeeping heroics from Betis’ Claudio Bravo.

Atletico started strongly and Betis’ Chilean keeper had to make a couple of outstanding saves against Antoine Griezmann and Angel Correa, both moves created by Argentinian midfielder Rodrigo de Paul.

It was only a matter of time until Atletico opened the scoring, however, with Correa feeding the ball to Carrasco, who finished with a powerful left-footed shot into the roof of the net.

Atletico kept harassing the Betis defense in the second half and were denied a second goal by VAR, which signaled that Mario Hermoso had been offside before heading in a cross from Griezmann.

Instead, Betis’ veteran Argentinian defender Pezzella tried to clear a Griezmann corner kick only to head the ball into his own net.

Felix, who replaced Luis Suarez with 20 minutes left to play, swept in a third goal that was at first ruled out offside before a VAR check over-ruled that decision, giving the home side a comfortable victory.