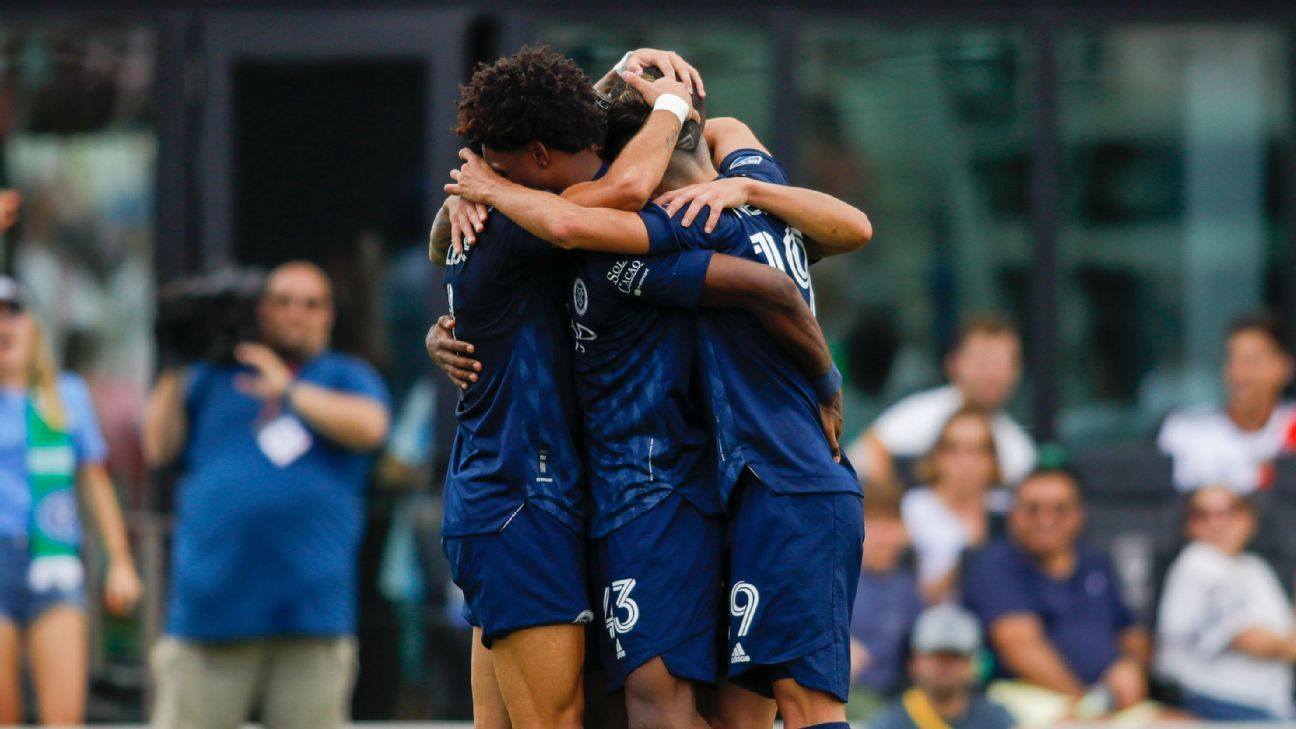 Fewer than seven days remain in the 2021 Major League Soccer season, and with the final matchday of the campaign on the horizon, there’s been plenty of movement both in the standings and our rankings. New York City FC is once again poised to welcome postseason opponents to the Bronx in Round One, while the Portland Timbers have arrested their slide — but their hold on a playoff place in the tightly packed Western Conference is as tenuous as ever.

Find out who else rose and fell in this week’s standings, and where your team sits in the final edition of our Power Rankings before Decision Day.

The Revs have done it, setting a record for most points in a season after beating Colorado in midweek, 1-0. With the Supporters’ Shield secure, now Bruce Arena can rest players and tune up for the playoffs. — Carlisle

Sporting picked up three important points in a 2-0 win against the Galaxy midweek before a 2-1 loss in Minnesota on Sunday. With games against Austin and RSL left this week, Kansas City is tied with both Seattle and Colorado on points (58) atop the West. — Bonagura

The Sounders were completely out of sorts from the start in a 3-0 loss to LAFC on Tuesday, but head into the final week with a pair of game to grab the top spot in the Western Conference. — Bonagura

The Union remain a solid team, yet questions persisted about their attack. So the fact that midseason acquisition Daniel Gazdag is rounding into form — three goals and two assists in his past four matches, including one of each in the 2-0 win against FC Cincinnati — bodes well for Philadelphia. — Carlisle

After falling 1-0 at New England on Wednesday, the Rapids bounced back with a 1-0 road win at Houston on a Dominique Badji goal. The win brought Colorado level on points with both Kansas City and Seattle but the Rapids only have one game left (LAFC on Sunday), while both SKC and Seattle have two to play. — Bonagura

The Red Bulls left it late against Montreal, but grabbed a precious three points thanks to Fabio‘s stoppage-time winner. Now New York has two chances to clinch a playoff spot, but with matches against Atlanta at home and Nashville away, it won’t be easy. — Carlisle

A 2-1 win against Minnesota on Wednesday pushed the Whitecaps into sixth place in a crowded Western Conference. Tuesday’s game at LAFC is the club’s biggest of the season and a win would clinch a playoff spot. A loss would see Vancouver fall behind LAFC, which is currently in ninth place, before finishing the season against Seattle. — Bonagura

Not for the first time, Atlanta was made to pay for a lack of killer instinct, failing to build on a 1-0 lead and settling for a 1-1 draw against Toronto. The Five Stripes, sixth in the East, control their destiny, but a pair of road games against the New York Red Bulls and FC Cincinnati beckon. The latter seems like a gimme, but nothing is guaranteed in the chaotic world of MLS. — Carlisle

Following a wild Wednesday win over FC Cincinnati, Nashville secured a draw against Orlando, the league-leading 17th time this season that it’s shared the points this season. Hany Mukhtar continued to state his case for the MVP award against Orlando with this 15th goal of the season. — Carlisle

The Loons bounced back from a midweek loss to Vancouver to beat Kansas City 2-1 on Sunday to jump to fifth place in the Western Conference. With only one more game left, Minnesota will have a better sense about where it stands after the midweek games are played. — Bonagura

Remember that six-game winless streak that threatened to derail NYCFC’s season? Yeah, me neither. Wins over Chicago and Miami mean the Cityzens have now won three games on the trot and clinched a spot in the postseason. Meanwhile, Valentin Castellanos has taken over the Golden Boot lead with 18 goals. — Carlisle

A 2-0 win against San Jose ended the Timbers’ three-game losing streak and keeps them in position to host a playoff game with games against RSL and Austin left this week. — Bonagura

LAFC grabbed a huge three points in a 3-0 win against Seattle on Tuesday, but the team remains in ninth place — two points behind the Galaxy in the final playoff spot (and a point behind eighth-place RSL). A win against Vancouver would vault LAFC over the sixth-place Whitecaps on goal differential before finishing the year against Colorado. — Bonagura

That miracle Columbus needed to reach the playoffs? It’s still within reach after a pair of wins over Orlando and D.C. United, with Lucas Zelarayan netting three times and adding two assists over the two games. With three of the Crew’s playoff rivals having a game in hand, Caleb Porter’s side will need some help as well as taking care of business against the Fire. — Carlisle

Orlando is still livid, as it thought it had scored a late winner against Nashville, only to get VAR’d and so three points became one. Combined with the midweek loss to Columbus, the Lions are left with the likely task of needing a result against Montreal on the final day of the season to confirm their postseason place. Not easy at all. — Carlisle

A 2-0 loss to SKC dropped the Galaxy to the seventh and final playoff spot in the West ahead of their final two games of the season (at Seattle, home vs. Minnesota). For long stretches of the season, the Galaxy looked like a lock for a home playoff game and now failure to qualify is a legitimate concern. — Bonagura

That’s two games in a row now that Montreal has conceded in stoppage time, costing it a total of three points that would make a huge difference in terms of its postseason hopes. The latest frailties came against fellow postseason contenders the New York Red Bulls. Home wins against Houston and Orlando to make the postseason is doable, but the pressure is on. — Carlisle

Things were looking up for the Black and Red after beating the Red Bulls in midweek, only for them to succumb to Columbus, despite taking an early lead. Going 1-4-1 in their past six games doesn’t exactly scream playoff contender. Now DCU need to get a win over Toronto and get plenty of help elsewhere. — Carlisle

Two late goals against Dallas on Wednesday allowed Salt Lake to escape with a 2-1 lead and possibly save its playoff hopes, but it responded with a deflating 4-3 loss to San Jose and remains a point below the playoff line. Two difficult games remain: Portland and a road game to Kansas City. — Bonagura

Chris Wondolowski was back on the scoresheet for San Jose in a riveting 4-3 win at Real Salt Lake that could have playoff implications for the hosts. Cade Cowell‘s long goalless drought ended on an incredible solo run that encapsulates the optimism about his future. — Bonagura

Losses to Atlanta and NYCFC meant Miami was finally put out of its postseason qualification misery. Phil Neville was hired to improve the Herons’ fortunes. Going from 1.04 points per game to (at present) 1.15 probably isn’t what Miami’s ownership had in mind. — Carlisle

With little left to play for but pride, the Fire have done what they could to make life difficult for the playoff contenders. Chicago did push NYCFC in midweek, but still fell 1-0. The club’s coaching search goes on. — Carlisle

Austin missed its opportunity to pass FC Dallas in the standings in a 2-1 loss, leaving two difficult games this week — Kansas City and Portland — to try to finish the season out of the Western Conference cellar. — Bonagura

The Reds’ postseason hopes have long since been over, but Toronto continues to be a tough out for the Eastern Conference’s other playoff contenders. After securing draws against Montreal and Philadelphia, TFC did the same to Atlanta United thanks to a late goal from Jordan Perruzza, the first of his MLS career. — Carlisle

Dallas is unlikely to finish in last place in the Western Conference after a 2-1 win against Austin, but that hardly makes up for what has been an extremely disappointing season. — Bonagura

Only Cincinnati has fewer wins this year than Houston (6), which lost 1-0 to Colorado on Sunday and ends the year with a rare nonconference trip to Montreal on Wednesday. — Bonagura

FCC continued to limp to the finish line, squandering a pair of two-goal leads before losing to Nashville 6-3, and then falling to Philadelphia 2-0. That’s 11 losses in a row now, but heading into the last week of the season, Cincinnati actually does have something to play for: It will want to avoid breaking its own dubious mark of 75 goals conceded in a single season. Cincinnati sits at 72 with one game to play. — Carlisle