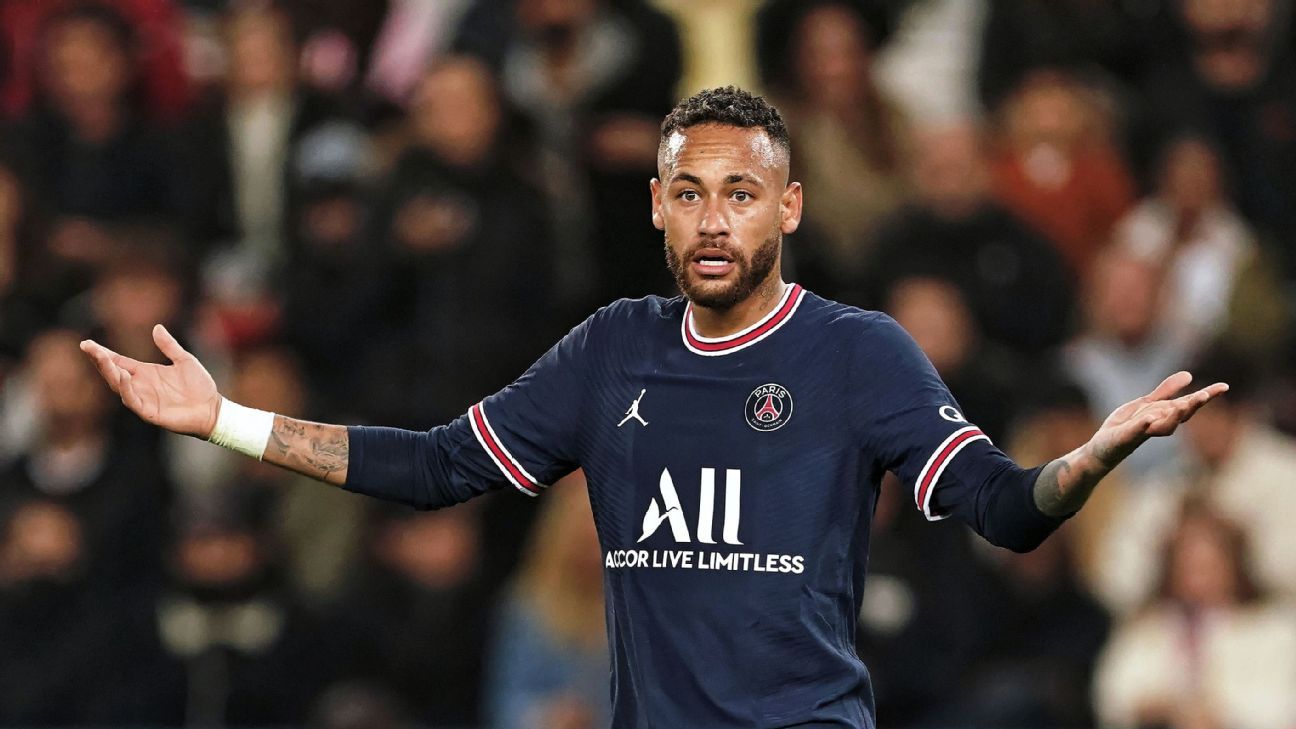 Disappointing. Transparent. Ghostly. Average. You can probably think of a few more ways to describe Neymar‘s season so far — in fact, these are actually kind words in regards to the performances the Brazil international has been putting up for Paris Saint-Germain, as some fans are far more extreme in criticism of their No. 10.

Neymar used to be a machine, especially in Ligue 1 with incredible stats, averaging almost a goal per game (56 in 70 matches in his first four seasons in France) and being involved in more than a goal per game (87 goals and assists over that same period). However, after a quarter of the 2021-22 season, his stats paint a very different story. One goal in six league games and 495 minutes played, with two assists and only three big chances created overall. The Brazilian superstar used to be so much more than that; he took Ligue 1 by storm when he arrived from Barcelona in the summer of 2017, a genius with an antagonistic style and personality. He missed more than half of PSG’s games each season (20 in the 2017-2018 season, then 17, 15 and 18), but would compensate by delivering some moments of absolute brilliance.

So what is happening? Where has Neymar gone, and why is this year’s version a pale imitation of the brilliance he’s displayed at PSG over the past four seasons?

Perhaps what we’re seeing so far this season could have been predicted. It feels like Neymar is becoming more peripheral, or that something’s missing. He doesn’t have the same energy or efficiency in everything he does on the pitch. Basically, too often he takes too many touches for not enough end product. And with the arrival of Lionel Messi and the growing importance of Kylian Mbappe in the team as well, Neymar is not the main option on the ball anymore. The rest of the team used to almost automatically pass him the ball regardless of where he was on the pitch. That is now not the case.

Physically he has struggled, and we are not just talking about him returning for preseason in July with a few kilos to shift. He can’t maintain full intensity, with or without the ball, like he used to. He is not as explosive as he used to be on his first steps, especially in one-vs.-one situations where he used to be one of the best in the world. He is heavier and slower.

And it is not about his age, as he only turns 30 in February and should be in his peak years. The problem is deeper than age, fitness or teammates.

Julien Laurens breaks down the position he would like to see Lionel Messi play and explains why he has yet to score in Ligue 1.

Maybe, he is starting to be a bit blasé. He has done it all now, in a sense, winning almost everything you can win over a lucrative and brilliant 15-year professional career. Yet, the fall is breathtaking.

Neymar’s yet to turn in a match-winning performance for PSG this season; his average player rating in French newspaper L’Equipe is 4.3 out of 10 in his six Ligue 1 appearances so far. He got a mark of 2 for his dreadful display in the shock 2-0 loss at Rennes just before the October international break, and a 3 for his performance in the recent 0-0 draw with Marseille. He was better in September’s 2-1 win over Lyon, but overall it’s far from good enough. It’s a similar story in the Champions League: Neymar featured against Club Brugge and Manchester City, but recorded no goals, assists or chances created.

After giving him a huge new four-year contract near the end of last season, PSG expected more from him this year, but sources inside the club tell ESPN that the club is not worried. They are sure that Neymar will get back to his best. Neymar, for his part, is just as certain that he will recapture his best form.

So what does Mauricio Pochettino think? The manager has a close relationship with Neymar, and he’s happy with him. He tells him privately and also claims it publicly: he is satisfied by Neymar’s performances. He even praised him after the Marseille draw, despite yet another anonymous display.

There is, however, one thing that Neymar does better now than before: defending. Believe it or not, the Brazilian has put in a real shift supporting his teammates at the back this season. Has this been to the detriment of his attacking input? We will only know for sure over the long-term.

PSG need Neymar at his best if they want to win the Champions League. He did set up Angel Di Maria for the decisive goal in the 2-1 win against champions Lille last Friday, which bodes well for their midweek trip to RB Leipzig in the Champions League. In the end, those in and around PSG are hoping that, sooner rather than later, they will get to see the real Neymar again.