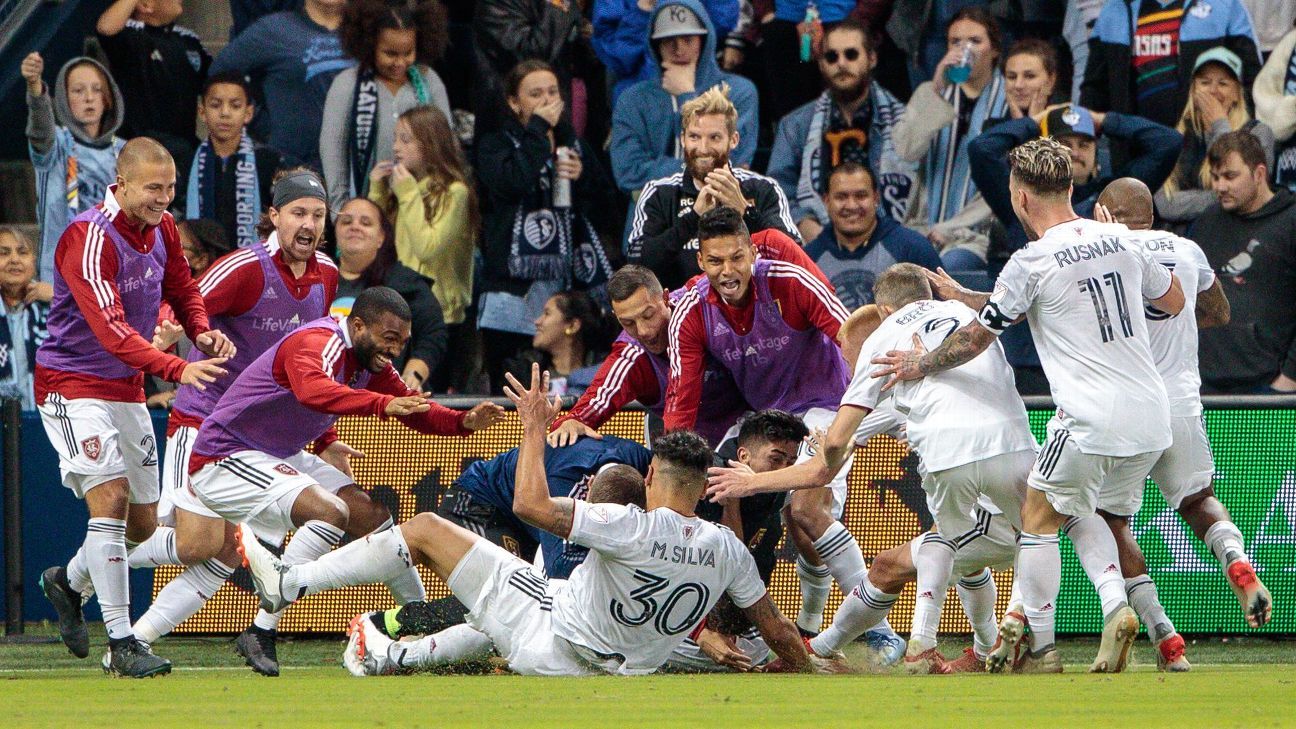 Major League Soccer loves to tout how chaotic Decision Day is. The reality is that sometimes it is, and sometimes it isn’t. But on Sunday, this was one instance where the chaos-meter redlined, and that was especially true in the Western Conference.

For most of the day, it seemed like the LA Galaxy would do enough to secure its spot in the postseason. Its game against Minnesota United was a wild affair, with the Loons surging to a 2-0 lead, the Galaxy battling back to tie, Minnesota moving in front again, only for Chicharito to equalize for the second time. Franco Fragapane missed a penalty, but with Real Salt Lake deadlocked with Sporting Kansas City, it didn’t seem to matter either way.

Five minutes into stoppage time, RSL’s Damir Kreilach popped up to slam home a goal courtesy of a bicycle kick pass from Justin Meram. All of a sudden, the Galaxy was facing a Couva-esque moment, thinking it was through until the tables turned late. An earlier handball on RSL’s Justen Glad somehow avoided the attention of VAR. The Galaxy couldn’t find a way back, and it was Minnesota and RSL, as well as Vancouver — reaching the postseason for the first time since 2017 — that were through instead.

“I wouldn’t like go through that every week fellas,” Minnesota manager Adrian Heath told Fox Sports. “Obviously we got we got word on the bench, you know that Salt Lake had scored and we knew that if [the Galaxy] got another that we were going to be out, which would have been a travesty the way we played today.

“[I’m] pleased for the players, pleased for everybody back home. And now we go to Portland.”

That RSL reached the postseason was stunning given the way it had limped through the last weeks of the season. With its fate in its hands, it contrived to lose home games against San Jose and Portland while conceding seven goals in the process. So why would anyone expect RSL to go to Kansas City and get a result, especially with SKC still in the hunt to finish atop the Western Conference?

It certainly helped that interim manager Pablo Mastroeni reverted to a 4-2-3-1 that provided more defensive stability. But with little left to lose, RSL found sustenance from the fact that they were still in the hunt, and with a match-winner like Kreilach in their ranks, there was every reason to think they could get it done.

“I think the word is belief,” said interim manager Pablo Mastroeni, taking a break from his postgame beer.

“I think the moment you lose that, it doesn’t matter what style play, formations … I knew there was a ton of belief on the field, because you kept going and you kept going. A team that doesn’t believe throws their hands up and hangs their heads. And these guys have been warriors all year long.”

RSL’s gain completed a debacle for the Galaxy. This was a side that managed to win just two of its last 15 games, even as Chicharito returned from injury. And now for the fourth time in five years, it will watch the postseason from home. And for all of the talk about building a foundation, such efforts shouldn’t preclude a team with the Galaxy’s resources from making the playoffs. This is a failure pure and simple.

The Galaxy isn’t alone. At the beginning of the year, LAFC was thought to be among the league’s aristocracy. The Colorado Rapids, while not quite paupers, were looked upon as also-rans at best. After all, it was LAFC that had stars such as Carlos Vela and Brian Rodriguez. Sure, Diego Rossi departed in midseason, but he was replaced by Cristian Arango, who delivered 14 goals and two assists. Colorado and GM Padraig Smith seemed adept at collecting talented players like Kellyn Acosta and Michael Barrios, but it wasn’t a side to really strike fear in opponents.

Yet on Sunday, the respective fortunes of the teams revealed a massive role reversal, as Colorado tore apart LAFC 5-2. With the Seattle Sounders drawing 1-1 at Vancouver, the Rapids suddenly found themselves claiming the top spot in the West, while LAFC missed the playoffs for the first time in their brief history.

The failure to make the playoffs makes it seem like the end of an era for the Black-and-Gold. Bradley and Vela are out of contract. Both manager and player have been the collective face of the franchise since it debuted in the 2018 season. LAFC certainly heads into the offseason facing more uncertainty than ever.

But honor is due the Rapids. In addition to Smith’s dealings in the trade market, Robin Fraser has done a remarkable job as manager. This is a team whose collective is certainly greater than the individual pieces. Does Colorado have enough to make a deep run? The advantage of playing at altitude won’t hurt, and Fraser has the managerial chops to pull it off. But at minimum, the tectonic plates in the Western Conference are shifting.

Gerhard Struber sported a grin akin to a mad scientist whose crazy experiment worked out exactly as he’d hoped. Frankenstein’s Monster, aka, the New York Red Bulls, had just ground out a 1-1 draw against Nashville SC, and when the rest of the music had stopped in the Eastern Conference, RBNY was able to grab the seventh and final playoff spot at the expense of D.C. United, CF Montreal and reigning MLS Cup champions the Columbus Crew.

This was not a case of a team backing into the postseason either. The Red Bulls went 7-1-4 down the stretch, which over the same period was five points better than the Crew, saw them make up eight points on DCU and was 10 points better than Montreal.

For Struber it was a case of his side finally getting the hang of his high-press tactics. He called the first three to four months of the season a “rollercoaster ride.” Prior to the team’s game against Miami on Sept. 17, the Red Bulls’ chances of making the playoffs were put at 7%. But New York won that night 4-0, sparking a run in which the team’s play was more stable.

“What I want from them in every single game is [now] more and more in their brain,” he said of his players. “Now I think you can make a wakeup call at two o’clock in the morning and every single player understands what we want, and I think this is the biggest answer for our style of play.”

For fans of chaos, Decision Day got off to a perfect start as Fabio put the Red Bulls up 1-0 after a cozy 38 seconds, corralling Christian Casseres’ cross and firing past Nashville keeper Joe Willis. Nashville responded later in the half with a free kick from Hany Mukhtar that glance off the head of Fabio. New York then had to withstand a second half barrage. D.C. United was handling Toronto FC, 3-1, and if the Red Bulls had conceded it would have been the Black-and-Red getting in. As it turned out, New York survived, booking a first round date against the Philadelphia Union.

As for those teams feeling the pain from missing the postseason, Columbus deserves special mention, failing to qualify a year after winning MLS Cup. It also continues an odd run for manager Caleb Porter whose teams have never reached the postseason in consecutive years.

Yet it is Montreal is the side most in need of Novocain. CFM’s match against Orlando was essentially a winner-take-all match, and Montreal was thought to have the edge given it was playing at Stade Saputo. Instead it delivered a collective meltdown replete with blown chances and loss of discipline. Montreal had no luck either. Already behind to Sebastian Mendez’s 55th minute wonder goal, an apparent tally by Romell Quioto’s was wiped out for offside, even as replays — albeit from suboptimal angles — appeared to show it should have stood. Montreal’s game unraveled from there. Rudy Camacho was sent off in the 79th minute and Daryl Dike sealed it seven minutes later with a goal on the counter.

Had Montreal reached the playoffs, it would have been an amazing achievement given that Thierry Henry resigned as manager just days before preseason was to begin. In his stead, Wilfried Nancy pushed his side forward, and got an immense season out of Djordje Mihailovic with four goals and 16 assists. In the end it wasn’t enough, leaving Nancy to try and tee it up again for next season.

For a moment, it looked D.C. United’s Ola Kamara was going to nab this year’s Golden Boot at the expense of NYCFC’s Taty Castellanos thanks to two goals against Toronto FC. It looked even more likely when NYCFC down to 10 players against the Philadelphia Union thanks to Gedion Zelalem’s 21st minute red card.

But then Castellanos conjured up a bit of magic, connecting on Maxi Moralez’s cross in the 53rd minute to not only tie up the match but pull himself level with Kamara.