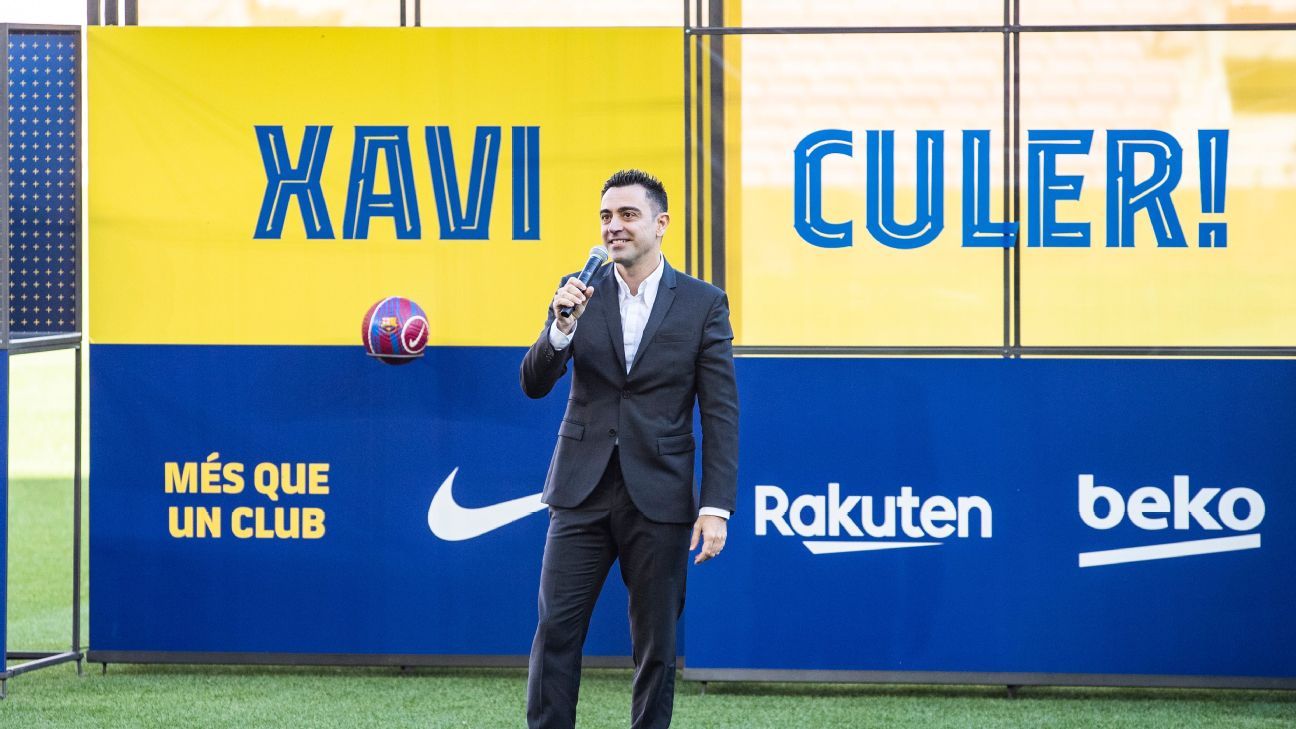 New Barcelona coach Xavi Hernandez has said his first task will be to set out a series of rules for the players to restore order as he takes over at “a difficult moment in the club’s history.”

Xavi, 41, was announced as Ronald Koeman’s replacement over the weekend after an agreement was reached to rescind his contract with Al Sadd. He was presented in front of almost 10,000 supporters at Camp Nou on Monday, signing his contract on the pitch in front of his family.

The former midfielder, who made 767 appearances for the club as a player, takes over with Barca winless in four LaLiga games and languishing in ninth place in the table.

“I think at first, it’s important that we put rules in place and be more demanding with ourselves,” Xavi said when asked how he would try and turn things around.

“After that, we can talk about values, about respect and attitude, because if we don’t have values, we don’t have a team. Then we can look at the model, how we play, how we attack, how we defend.

“At the end of the day, the idea is the same as [Johan] Cruyff’s. My first defender is the striker and my first attacker is the goalkeeper. We have to work tactically, press high and dominate the ball.

“It’s not about being tough, but having rules. I will try to help the players, personally and professionally. I know how taxing it is psychologically to play for this club.”

Xavi has twice been offered the Barca job since leaving for Al Sadd in 2015, where he spent four years as a player before taking over as coach at the Qatari club in 2019.

He explained that he turned the role down twice in 2020, when Josep Maria Bartomeu was president, because the timing was not right for him and his family, while the “uncertainty” at the club also put him off.

“From the moment [president] Joan [Laporta] called this time, I had no doubts,” Xavi said, who also revealed he held talks with Brazil about joining Tite’s coaching staff before taking over after the 2022 World Cup.

“It’s true there was an approach from Brazil but returning to Barcelona was my dream. I have a great relationship with Laporta, he’s the best president the club have ever had, and this was the right moment.”

Xavi’s appointment has quickly drawn comparisons to Laporta’s decision to hire Pep Guardiola in 2008, with the Catalan club winning the treble the following season, although it was also pointed out that other former players have not faired quite so well when taking over at their former clubs.

“It’s a success if I am already being compared to Pep,” Xavi added. “I hope that I will be on the list with Pep and [former Real Madrid coach Zinedine] Zidane as opposed to the other one!”

However, Xavi acknowledged the circumstances he takes over in are completely different from the situation Pep Guardiola inherited over a decade ago.

Barca are in a rebuilding stage after losing Lionel Messi — who Xavi revealed has sent him a good luck message — to Paris Saint-Germain on a free transfer in the summer, while a series of injuries have also affected their performances this season.

“It’s worrying,” Xavi said of the club’s injury situation after knocks to Ansu Fati, Eric Garcia and Nico Gonzalez in Saturday’s 3-3 draw at Celta Vigo took the number of players sidelined at the club to 11.

“We have to see what the problem is and find solutions. It’s a task for the medical department. We have an idea, but we must speak with the president. We have to get players back.”

One player out of action with a hamstring problem is Ousmane Dembele. The French forward is also out of contract next summer, but Xavi made it clear just how highly he rates him as he urged Laporta, seated alongside him, to renew his deal.

“That’s a priority,” he said when asked about extending Dembele’s terms, turning to the president with a smile. “Coached well, he can be one of best in the world in his position. He has all the qualities to be a superstar.”

Xavi also hit back at the idea his friendships with former teammates will be a hindrance.

“For me, it’s an advantage to have the relationship I have with Gerard [Pique], [Sergio] Busquets, Jordi Alba, Sergi [Roberto] and Marc-Andre ter Stegen. Everyone starts from zero but the players that I know are the ones I will push the hardest. I want them to be the leaders and to take the bull by the horns at times.”

Xavi’s reign as Barca coach kicks off on Nov. 20 with a Catalan derby against Espanyol at Camp Nou. Three days later they host Benfica in the Champions League, knowing that a win will secure their place in the knockout stages of the competition.