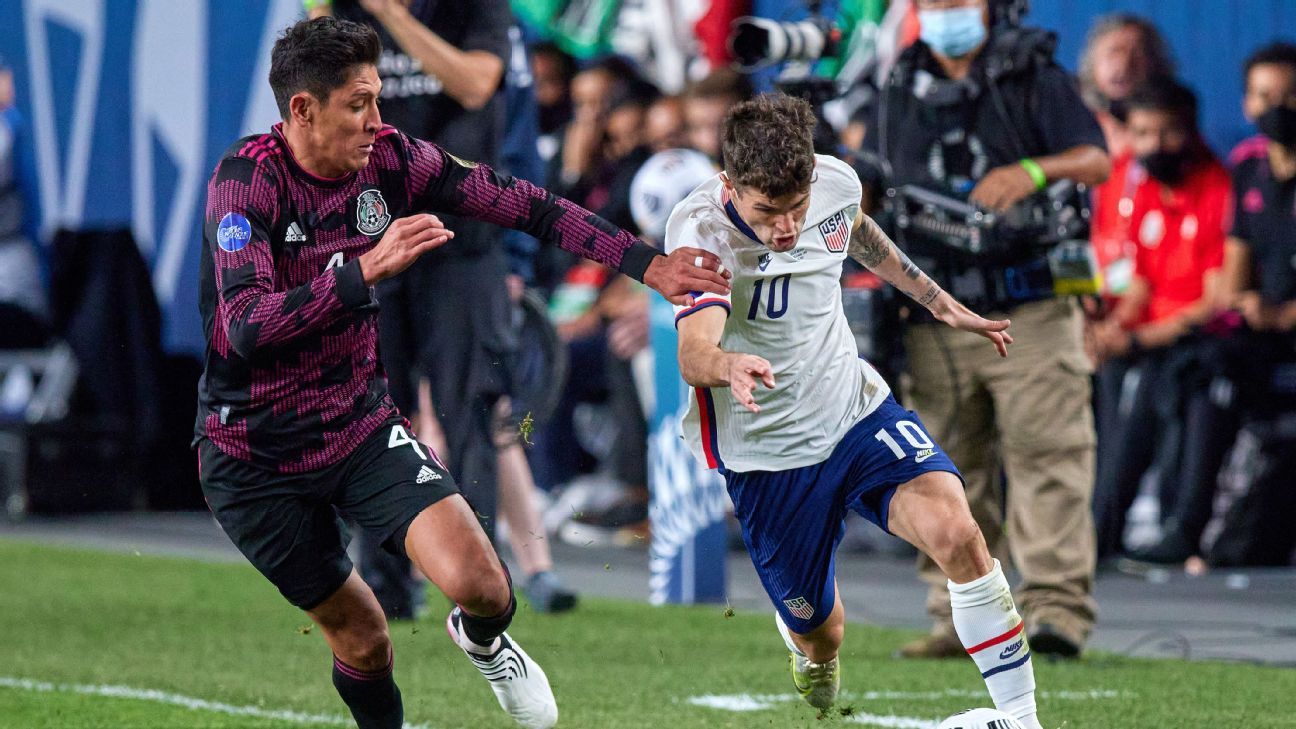 The United States and Mexico face off in World Cup qualifying this Friday at Cincinnati’s TQL Stadium (stream LIVE on ESPN2, 9 p.m. ET). Stakes and emotions are always high when these sides clash, especially after two epic summer matches in tournament finals. Will the U.S. make it three in a row against El Tri, or will Mexico march out with bragging rights?

ESPN reporters Kyle Bonagura (@BonaguraESPN) and Eric Gomez (@EricGomez86) break down what to look for from each side.

How has each side performed since summer meetings?

Prior to this summer, the USMNT had recorded just one victory against Mexico in a competitive match in more than 12 years. To pick up two — in the Gold Cup and Nations League finals — in just over two months was a significant accomplishment. Still, the magnitude of those two competitions pales in comparison to World Cup qualifying, so while they were celebrated, they didn’t resonate broadly.

There is not a one-size-fits-all reaction, of course, but the general takeaway — or at least the most logical one — was that it showed the USMNT had closed the gap in quality between it and Mexico and raised expectations headed into qualifying. In the two previous matches between the rivals, a 2019 friendly and the Gold Cup final earlier that year, Mexico was clearly on a different level. That wasn’t the case in either match over the summer with the U.S. fielding two almost completely different rosters. — Bonagura

Predictably, losing twice to the United States in title games didn’t go over too well for Mexican fans and media. Doing so in the span of two months cut deeper, and prompted the first wave of outright pressure for Gerardo “Tata” Martino, who’s managed El Tri since 2019. Mexico limped through both those aforementioned finals, which raised several questions about Martino’s ability to lead Mexico through an expanded World Cup qualifying format in 2022.

In losing two consecutive rivalry matches to the United States, widely considered in Mexico as a rising threat due to its impressive group of young talent, El Tri‘s consistent dominance over CONCACAF was put into question, and built up to a make-or-break qualification campaign. Fortunately for Martino, Mexico’s hot start in the Octagonal has meant he’s regained more solid footing en route to this third matchup with his team’s biggest rival. However, potentially losing again against the USMNT — with a quick turnaround before facing emerging force Canada — will undoubtedly mean Martino’s second honeymoon will be over. — Gomez

What sort of form are both sides in?

The United States has been a mixed bag through six matches. The USMNT picked up six points in the three-match October window with wins against Jamaica (2-0) and Costa Rica (2-1), but lost at Panama (1-0). There has stretches of dismal play (El Salvador, Panama, the first half against Honduras) and periods where things were really clicking (second half against Honduras, second halves vs. Jamaica and Costa Rica).

World Cup qualifying is a zero sum game and from that standpoint, the United States is in an envious position — second between Mexico and Canada — and is far more likely to get to Qatar than not.

For some, qualification is all that matters and after failing to qualify for Russia last cycle, that’s a defensible position. However, despite being one of the youngest national teams in the world, the United States’ collection of talent should demand a higher standard of play within CONCACAF than what it has shown thus far.

Rationalizing subpar showings based on the team’s history in CONCACAF from past generations is a soft mentality. This team has the players to dictate how matches are played, and that should be the case in every remaining one outside the trip to Mexico. — Bonagura

Mexico’s pragmatic, ball-dominant style under Martino has meshed well with the abilities of his top players. The 4-3-3 formation favored by the Argentine manager has meant wider avenues on offense for players like Hirving Lozano and Jesus Corona, who thrive on space up front. Amid a growing level of talent from the confederation’s top teams, Mexico has finally understood that the days of waltzing through qualification are over.

Although El Tri is undefeated, with four wins in six matches so far, the team’s performance has been far from dominant at times, preferring to pounce on specific moments during matches. In the midst of a rough four-game stretch away from home, Mexico’s 2-0 win over El Salvador at the vaunted Cuscatlan stadium was proof that it can go into hostile environments and pick up points. Although questions remain in certain positions (putting together the back line is consistently an issue), Mexico has emphatically answered the questions that plagued it during their less-than-stellar summer. — Gomez

Which players need to make an impact?

Christian Pulisic‘s return to the team after missing the last window is one of the obvious storylines, but it’s unclear how many minutes he’ll be earmarked for. The Chelsea winger was injured against Honduras on Sept. 8, and has only featured twice for his club since — a pair of substitute appearances last week. Just speculating, it seems unlikely he’ll be good for 90 minutes against Mexico, but considering the stakes it seems reasonable he could start and play as long as he remains effective. That said, a substitute appearance wouldn’t be too surprising.

After getting sent home from the first window and having two fairly quiet showings against Jamaica and Costa Rica in October, midfielder Weston McKennie is overdue for a standout performance in a U.S. shirt. He’s in good form with Juventus after a slow start in Serie A, and is complemented well by Tyler Adams and Yunus Musah in the three-man midfield. When McKennie is assertive, he changes games, which is what needs to happen against Mexico. — Bonagura

Offensively, it might be tempting to say Mexico marches to the beat of Lozano’s drum, but the absence of Raul Jimenez through most of 2021 was sobering for fans and media, who discovered how shallow the striker pool was for El Tri. The combination of Rogelio Funes Mori and Henry Martin failed to adequately cover the amount of goals Jimenez is responsible for — and allowed defenders to key in on wingers Lozano and Corona. A healthy Jimenez is vital for El Tri‘s success up front.

However, Mexico’s key to victory against the United States will likely lie in central defense. Cesar Montes will miss the match due to injury, and finding the right pairing between Johan Vasquez, Nestor Araujo and Hector Moreno will prove vital. Although Araujo and Vasquez might have a presupposed edge due to their standing as Europe-based players, the two don’t have much experience playing together, which might give Moreno an advantage over either of them to start. Regardless of who gets the call, the combo will need to head off a strong American attack likely headlined by Pulisic and FC Dallas youngster Ricardo Pepi. — Gomez

Are the managers under pressure?

With only two matches this November window, USMNT coach Gregg Berhalter won’t have to factor in squad rotation in the same way he did in September and October. That will provide some real insight into what he thinks is the team’s best lineup. He already made a bold decision not to call in defender John Brooks, whose form for the U.S. has lacked, and won’t have access to right-back Sergino Dest or winger Giovanni Reyna due to injury, but there are no excuses at this point.

In no world is his job actually in jeopardy, but in many ways everything he’s worked on since taking over was to build to right now: beat Mexico at home with work still to do to qualify. A convincing victory would validate the process over nearly three years, while a poor showing in a loss has the potential to discredit the whole project. Somewhere in between is probably the more likely result, in which case opinions about his job as coach will continue to range significantly. — Bonagura

As mentioned earlier, Martino’s two losses to the United States over the summer meant an added onus was put on the qualifying campaign in order to keep dissatisfied pundits and fans at bay. He’s met those expectations head on, and from a result standpoint, a loss in Cincinnati wouldn’t put those World Cup aspirations in any kind of peril. However, even within the confines of any rivalry — already intense by nature — Mexican fans and media feel an added sense of failure when dropping any match to the U.S.

Martino has the full backing of Mexico’s federation president Yon de Luisa, and he’ll continue to have it even if he comes away with zero points from this window. The only real difference here is the amount of criticism he’ll be subject to from here to next year based on the results obtained. Losing to the United States a third time in one year would also likely put a serious dent into Martino’s hopes for staying on past the 2022 World Cup cycle, a scenario already being discussed at length in the upper echelons of the federation. — Gomez