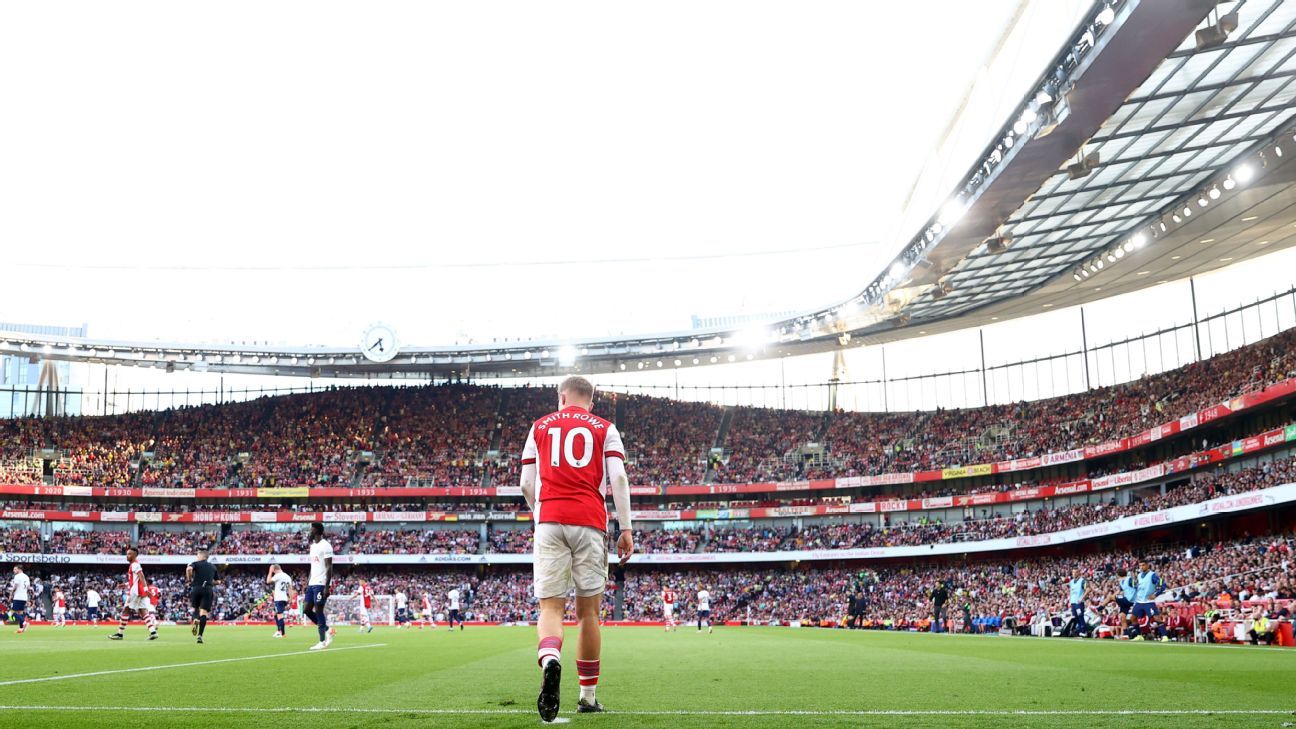 Emile Smith Rowe has revealed he had to overcome a fear of playing in front of crowds as he broke into the Arsenal first-team.

The 21-year-old earned his first senior England call-up this week after Marcus Rashford and James Ward-Prowse pulled out, a reward for a fine campaign with the Gunners in which he has registered four goals and two assists in the club’s opening 11 Premier League games.

Smith Rowe made his first League start under Mikel Arteta — and only the second of his career — in a 3-1 win over Chelsea on Boxing Day last year, since when he established himself as a regular, signed a new five-year contract and taken over the No. 10 shirt previously worn by Mesut Ozil.

The midfielder admitted he inadvertently benefitted from the absence of fans due to COVID-19 restrictions at the time because of a fear dating back to his formative days prior to a difficult loan spell at Red Bull Leipzig in the first half of 2019.

“It was a big game but no fans definitely helped me,” he said. “I’m always really nervous before the game and not having that pressure of everyone shouting, that helped me a lot. I’m happy with the way things are going.

“I’m quite surprised to be honest that it’s worked out this way. I thought I wouldn’t be as confident as I am at the moment. It’s always extra special playing at the Emirates anyway.

“Maybe two seasons ago, just before I went to Leipzig, it was affecting to me. I think now I’m OK. I haven’t really changed anything. I think I’m always really nervous before a game. Maybe it helps, maybe it’s a good thing. It’s mainly in the changing room before the game. That’s when I’m most nervous. I have spoken to some players and that say the same as well.”

Arteta claimed last month that Smith Rowe’s progress had been down to certain lifestyle changes and the player himself confirmed he realised several dietary improvements were necessary.

“I didn’t used to eat that well to be honest,” said Smith Rowe. “I used to get cramp after 60 minutes and stuff. I wasn’t eating great, I wasn’t drinking that well, before games I wasn’t really that hydrated but since then I’ve tried to focus so much on it.

“My family have helped me a lot in the house as well, cooking for me. It was mainly my diet, nutrition and stuff like that. That’s really helped me.

“They [Arsenal] are strict but I didn’t really listen to be honest, I think that’s where I went wrong. But now I’m listening, all the time. “I like Nandos a lot. Maybe that’s killing me a little bit. I’ve tried to cut out chocolate and takeaways as much as I can. I’m always eating from home now.”

Arsenal have arranged for a personal chef to cook the Smith Rowe family their meals every night at their home as the club looks to develop a player who could have ended up at another London rival had things worked out differently.

Smith Rowe’s father, Les, is a Tottenham Hotspur fan but as an eight-year old growing up in Croydon — predominantly an area synonymous with Crystal Palace — he had a trial with Chelsea.

“At the time I was quite small, really skinny and just kept getting pushed off the ball,” he said. “I wasn’t getting involved and touching the ball enough, that’s what it felt like at the time, why I didn’t get in.”

Smith Rowe joined Arsenal aged nine and he resisted interest from Tottenham around six years later having supported the Gunners all his life due to his brother’s allegiance and by that point, he had formed bonds with several players including Bukayo Saka.

Smith Rowe watched on as Saka suffered racist abuse after being one of three Black players to miss in England’s Euro 2020 final penalty shoot-out defeat to Italy.

“I tried to give him some space at first,” he added. “He obviously had his holidays and stuff. After a couple of weeks, I sent him a message. It was obviously hard to see one of my closest friends at Arsenal.

“It was tough to watch, definitely. But when he came back, everyone got around him. No one spoke about. We tried to forget about it and move on and focus on the season. But Bukayo is a strong person and he’ll bounce back — and he has definitely already.”