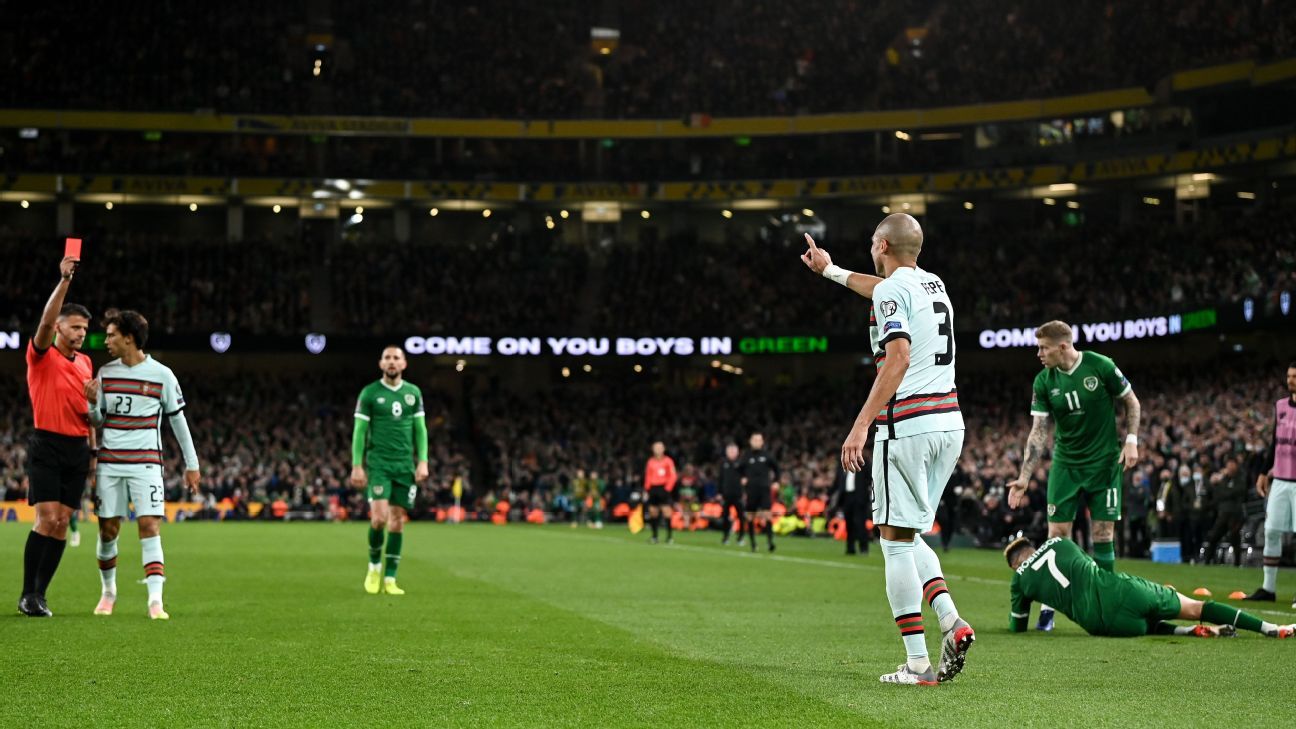 Portugal moved closer to automatic World Cup qualification on Thursday despite a poor 0-0 draw with Republic of Ireland that left them needing another point in their final game at home to Group A rivals Serbia to secure their spot in Qatar.

Portugal narrowly avoided a shock loss to Ireland two months ago thanks to two last-gasp Cristiano Ronaldo goals and seemed happy to take a point against the fourth-placed Irish knowing a superior goal difference to Serbia put them in the driving seat.

They will have to do it without Pepe, however, after the experienced central defender was sent off late on for a second bookable offence.

– UEFA World Cup qualifiers on ESPN+: Stream LIVE games and replays (U.S. only)
– Europe: What every country needs to qualify for the World Cup

In an evenly-contested first half of few chances, Ronaldo was foiled by a fine block from Ireland captain Seamus Coleman but the Manchester United forward was otherwise kept well under wraps by the hard-working hosts.

Chiedozie Ogbene, who plies his trade quite a few rungs below Ronaldo in the third tier of English soccer with Rotherham United, should have done better with a near-post header just before halftime in his first international start.

Ireland’s performance in Faro marked a turning-point in Stephen Kenny’s 14-month reign, during which he has blooded impressive youngsters like teenage goalkeeper Gavin Bazunu but waited 12 games for a victory, last month’s 3-0 win in Azerbaijan.

Playing in front of a full house at the Aviva Stadium for the first time since the COVID-19 pandemic began, Kenny saw more encouraging signs on Thursday, particularly from striker Callum Robinson, playing with the confidence of a man who had scored five goals in his last two internationals.

Missing Bernardo Silva through injury with the Manchester City maestro in the form of his life, Portugal also opted not to risk Joao Cancelo, Ruben Dias and Diogo Jota being suspended for Sunday’s table-topping clash and it showed throughout.

Ronaldo, who became the all-time leading scorer in men’s international football against the Irish last time out, almost added goal number 116 with the best chance of the game on 67 minutes but his glancing header slipped narrowly wide.

Despite their greater possession, particularly with the extra man, Ireland did little to threaten Rui Patricio‘s goal and Ronaldo went close again at the death.

In the other group game, Gerson Rodrigues took his total in the campaign to five goals by striking twice as Luxembourg beat bottom-placed Azerbaijan 3-1. Luxembourg will secure third place if they avoid defeat in their final game against the Irish.