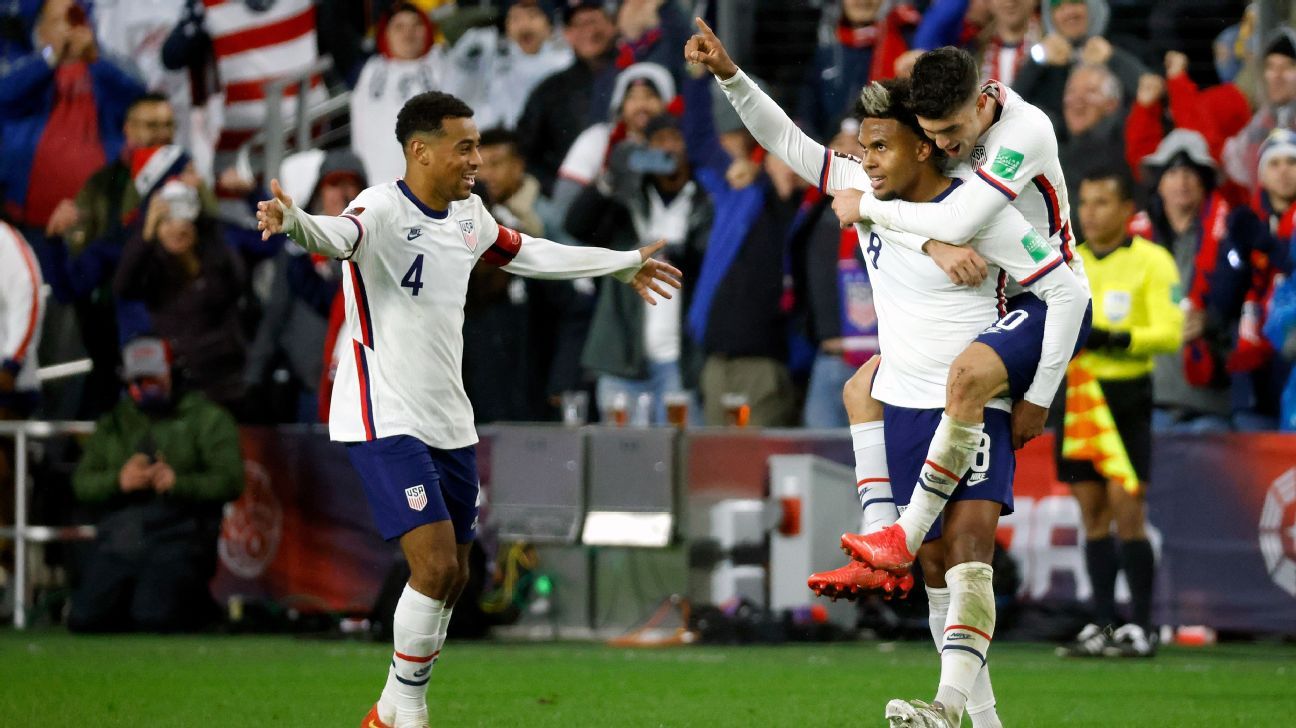 CINCINNATI — The serenade rained down from the stand known as the Bailey at TQL Stadium. They words were as familiar as they were uplifting.

Yes, it was a new venue for the United States men’s national team, and the mantra was directed at a new generation of players too, but the scoreline provided the same sense of satisfaction for the U.S. squad, which beat Mexico 2-0 thanks to goals from Christian Pulisic and Weston McKennie to give it three vital points on the road to qualifying for the 2022 World Cup.

It marked the sixth time since the turn of the century that the U.S. has won by that scoreline against El Tri in a competitive fixture. Most of those came at Columbus, Ohio’s Crew Stadium, but TQL Stadium proved a comfortable fit, with a boisterous crowd helping the U.S. enjoy every ounce of homefield advantage. The result also marked a rare three-game winning streak against Mexico, the first since the mid-2000s and first such streak to take place in a calendar year.

“They understand what we’re about and we understand what they’re about,” said Pulisic. “That’s what makes a great rivalry and I’m just really happy that we could come out on top again tonight. We knew it was always going to be a good game against Mexico, and to get three points just helps us get a lot closer to qualifying for the World Cup.”

But this win wasn’t so much about history as it was the present. On a night that witnessed some tightening in the Octagonal standings, the win kept the U.S. on course for World Cup qualification. The U.S. is now top, ahead of Mexico on goal differential with 14 points. That kept the U.S. one point ahead of Canada — 1-0 winners against Costa Rica — and three ahead of Panama, who came back from 2-0 down to claim a 3-2 road win against Honduras. The U.S. is now in a position to gain additional breathing room with Tuesday’s encounter at Jamaica.

The most encouraging aspect of the night was how this young group of players took another step forward. This was not a situation like the Nations League final last June or the Gold Cup final in August in which the U.S. relied heavily on its defending and goalkeeping and grabbed goals on set pieces. In this match, the U.S. was aggressive with its press and held its own in terms of possession. Nearly every player on the field performed well. The backline, led by Walker Zimmerman and Miles Robinson stifled the Mexico attack. The midfield gradually seized control, with 18-year-old Yunus Musah proving highly effective in setting up his attacking teammates. And Timothy Weah enjoyed a banner night where he tormented the left side of Mexico’s defense.

In a week in which the word “respect” was bandied about, and Mexico goalkeeper Guillermo Ochoa suggested that when the U.S. looks in the mirror, it aspires to be like Mexico, this was one encounter in which the U.S. was full value for its victory.

The U.S.’s approach required patience, however, as well as surviving some scares in the first half in which some giveaways in midfield created opportunities for El Tri. Fortunately, goalkeeper Zack Steffen was sharp, especially in denying Hirving Lozano in the 18th minute.

But Berhalter’s approach was to wear Mexico down, and in the second half, the pressure began to tell, with chances beginning to emerge. Weah in particular put in a series of dangerous crosses from which the U.S. couldn’t convert. Memo Ochoa’s save from a McKennie drive in the 49th minute left the impression that it might be one of those nights in front of goal for the U.S.

“The second half was where we started to pull away, particularly the first 20 minutes,” said Berhalter. “And that’s the effect that we have on opponents. When we can press them and we can be that aggressive around the ball and with the ball, turning them around making them face their own goal, it becomes really challenging.”

The U.S. found its breakthrough in the 74th minute, and it was Weah who was at the heart of the move, evading the attentions of Jesus Gallardo to put in a cross that was nodded home by Pulisic, who had entered the match just five minutes earlier.

Just how much Pulisic would be involved in the match was a matter of pre-match speculation. He had played a total of 21 minutes for club side Chelsea since injuring his ankle against Honduras back in September. But his presence provided the U.S. with a near immediate boost, and once Pulisic converted, he made sure he sent a message to Mexico, revealing a shirt that said, “Man In The Mirror.”

But it was a goal made by Weah, and the Lille attacker’s improvement during World Cup qualifying has been key to the U.S. keeping it’s qualification hopes on track. A meeting with Berhalter after the Panama defeat renewed Weah’s focus, and that was evident when he forced the game-winner against Costa Rica last month. Combined with his commitment to helping out on defense, has cemented his hold on one of the winger spots.

“In terms of my confidence, I’m playing with my club team, so when I come here and play, it’s amazing,” he said. “To be with the boys, it’s just super fun and we executed tonight and that was the most important thing.”

Weah also revealed that the “Man In The Mirror” t-shirt was the brainchild of himself and DeAndre Yedlin.

“Before the game, Mexico was talking a lot of smack and beating them just shuts them up,” said Weah. “We have to continue to win games and continue to beat them and that’s the only way we’re going to earn their respect and earn the world’s respect. But I think we’re on a great path right now and the future is bright.”

The only downers on the evening were the 85th minute expulsion of center back Robinson for two yellow cards, and a yellow card picked up by McKennie that will see both suspended for the Jamaica math. As good as Robinson has been, the loss of McKennie figures to cut deeper. Despite his two-game suspension back in September for violating the team’s COVID-19 protocols, McKennie remains the emotional center of this U.S. team and he, along with Pulisic, are rising to nemesis status as it relates to Mexico.

But perhaps these hiccups are what is needed to avoid a letdown against Jamaica, a team that is in desperation mode after conceding a late equalizer to El Salvador on Friday.

“To now win three in a row [against Mexico] is obviously amazing. But that doesn’t mean we can be complacent and think we’re the best around around,” said Pulisic. “Now it’s focus in Jamaica. So it’s about just keep going really and we want to continue to prove what this team is about and what they start to show the world what this national team is capable of.”

There is confidence growing within this U.S. team, one to match its talent. Even post-game celebrations took on a new air. As the “Dos a cero” cheers ebbed, Michael Jackson’s “Man in the Mirror” played over the stadium PA system. A new generation is making its mark.