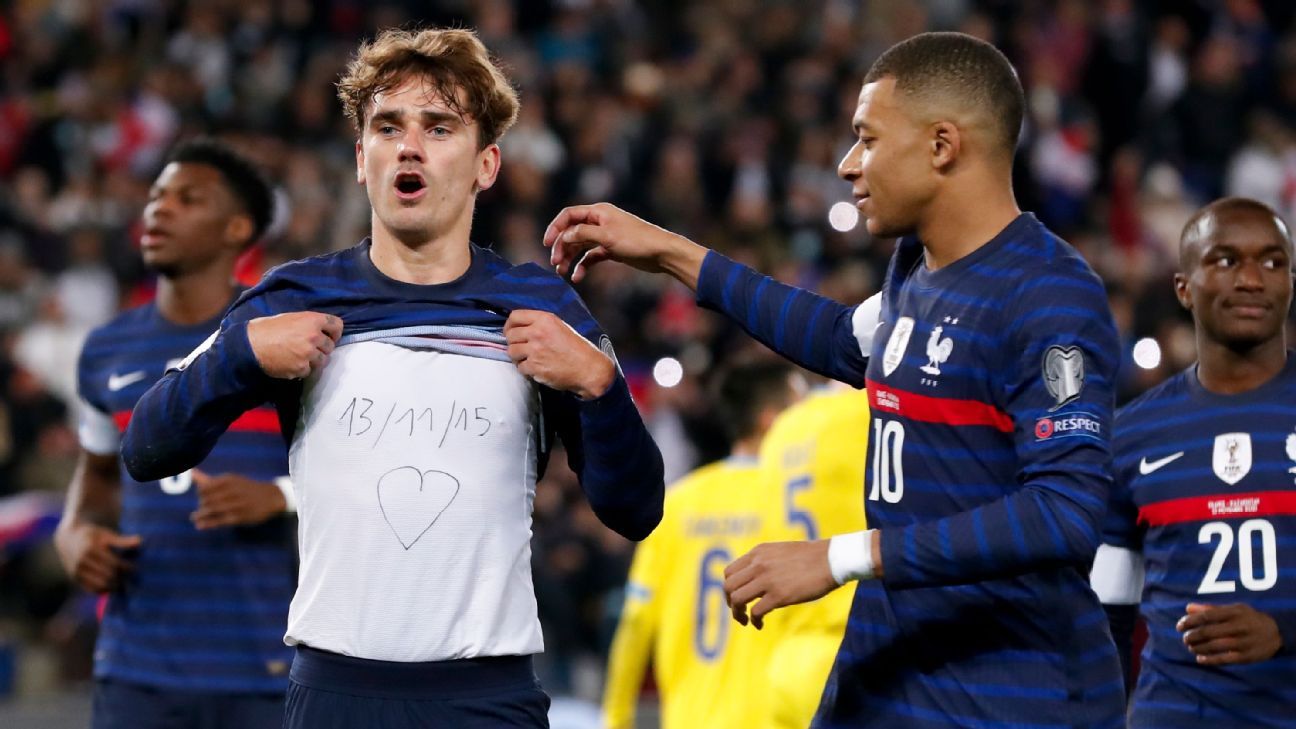 Saturday in Paris was not just about qualifying for the 2022 World Cup for France. Les Bleus booked their place in Qatar with no suspense whatsoever, with four goals for Paris Saint-Germain striker Kylian Mbappe in his home stadium in the 8-0 thrashing of Kazakhstan (stream the replay on ESPN+ in the U.S.). But they did more than that.

Six years to the day after a series of coordinated terrorist attacks across Paris — including at the national stadium while France were playing a match — killed 130 people and injured more than 400, there was a duty of remembering, of paying tribute and of honouring the memory of those lost on that dreadful night.

The Parc des Princes, where the game was played, was filled with emotion and banners in homage to those lost on Nov. 13, 2015. There was a minute of silence perfectly respected before kick-off. There was an incredible rendition of “La Marseillaise” by the crowd on 15 minutes, to mark the moment when the first bomb exploded outside of the Stade de France on that night six years ago during a match between France and Germany, while at the same time thousands of fans lit up their phone to create an amazing wall of lights in the stadium. And there was Antoine Griezmann‘s celebration after his goal, when he displayed a big heart and the date “13.11.2015” written on his t-shirt under his jersey (his sister, Maud, was one of the survivors of the attack on the Bataclan theatre that night).

A lot has happened for the French national team between that day and this, six years later, as the trial of 20 men accused of perpetrating the attack takes place in the capital. France coach Didier Deschamps and his players won the World Cup in 2018 and will now defend their second title in a year’s time in Qatar.

They will have, barring any injuries, a front three formed of Griezmann, Mbappe and Karim Benzema. Unlike at Euro 2020, the trio has now clicked in the new 3-4-1-2 formation set up by Deschamps. Griezmann has a free role player, operating mostly as a playmaker. Benzema is the central focal point and Mbappe drifts to the left, always ready to run in behind. All of them scored against Kazakhstan: four goals and one assist for the Parisian Mbappe, two goals for Real Madrid star Benzema and one for his Atletico Madrid rival Griezmann. The performance was ideal for the confidence and the dynamic within the trio.

The relationship between Benzema and Mbappe is shaping up to be something very special. It is easy to say in hindsight, but perhaps the Euros arrived too quickly for them. Deschamps had not called up Benzema for almost six years and he hardly had time to settle and integrate into the team before the start of the tournament. Qatar in 2022, the first ever World Cup to be held over November and December, will feel very different for them.

On Saturday, Mbappe was untouchable. He had never scored a hat trick with Les Bleus before, and he was the first to score four goals for the French men’s senior team since Just Fontaine in 1958. He became only the 12th player ever to get a 10-out-of-10 rating in French sport daily L’Equipe’s notoriously stringent ratings. At 22 years and 10 months old, he celebrated his 52nd cap for France, more than any other French player at that age. He has now scored 23 goals for his country. Although such comparisons have limited significance, it’s worth noting that Lionel Messi had 13 goals from 45 caps for Argentina and Cristiano Ronaldo had 20 goals from 53 caps for Portugal at the same age.

Qatar 2022 could also feel very different for Kingsley Coman. The Bayern Munich winger, 25, missed the 2018 World Cup through injury and only made two appearances as a substitute at Euro 2020. However, after a wonderful performance at right wing-back, the former PSG youngster has a new role to play in this team. Time will tell if he can cope in that position against better opposition than Kazakhstan and against a team which actually attacks, but he could be the “X-factor” going forward. On the other side, Theo Hernandez could also be the difference-maker. He delivered two more assists to take his international tally to one goal and three assists in only four caps.

In terms of balance, the back three offers much more solidity, even in the absence of injured pair Presnel Kimpembe and Raphael Varane. Jules Kounde or Dayot Upamecano represent the future, but they have plenty of other young and talented central defenders like Ibrahim Konate, Maxence Lacroix, William Saliba, Wesley Fofana, Mohamed Simakan and Jean-Clair Todibo ready to seize their chance.

But before thinking of the next few months, Deschamps and his players will enjoy this qualification. France have reached their 14th consecutive major tournament, and in that run they have reached at least the semifinals in six occasions and the quarterfinal stage nine times. The Qatar World Cup will be a new challenge for every team, but France will be as ready as any of them as they prepare to defend their title.

Liga MX champs Atlas part ways with coach
England roar back in thrilling draw with Germany
Mexico’s ‘Chucky’ Lozano steps up vs. Peru to give El Tri pre-World Cup boost
City’s Grealish hits back at Souness criticism
Pulisic, Fred, Hazard: Players who are better for their country than their club