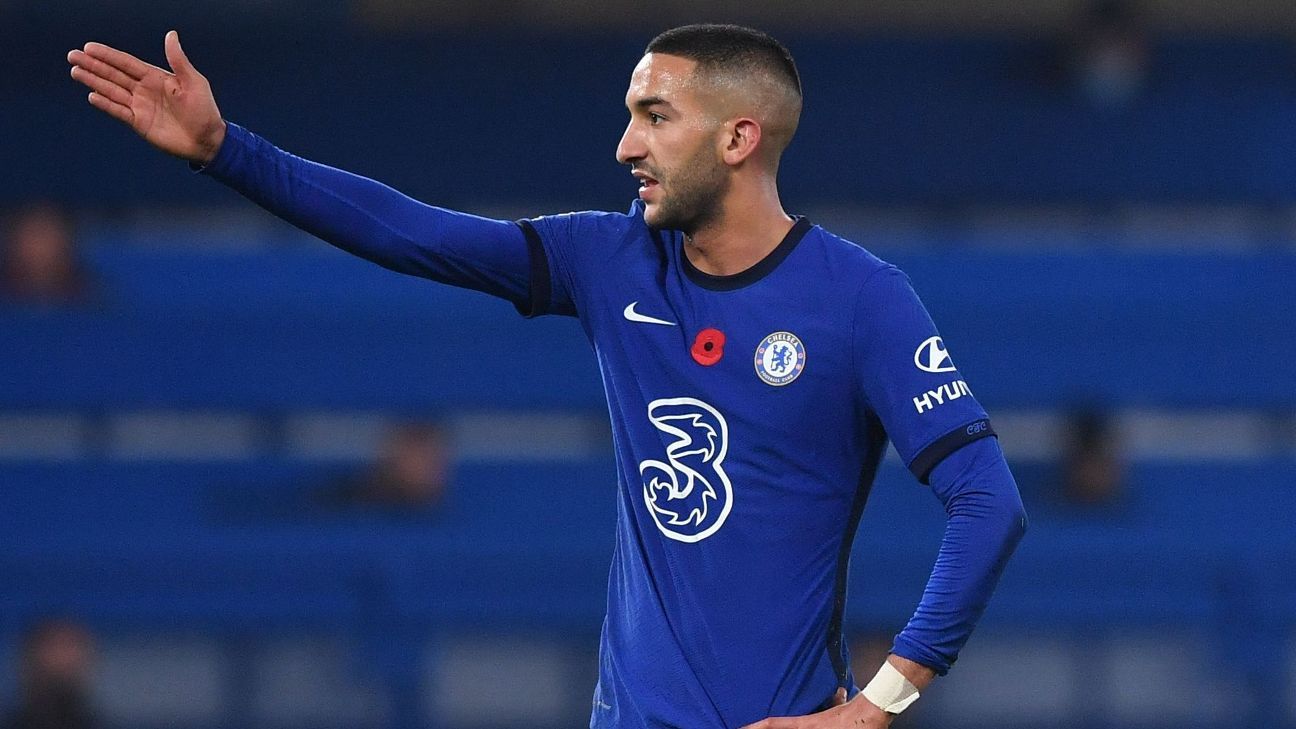 Since Xavi Hernandez arrived at Barcelona, there has been plenty of talk around his desire to bring in at least one new winger to strengthen his front line, with Manchester City‘s Raheem Sterling and RB Leipzig‘s Dani Olmo the main players mentioned.

Ziyech is the report’s main focus, as he has struggled for substantial at game time under Thomas Tuchel at Stamford Bridge and is seen as a viable option by Barcelona.

The report says that Chelsea could be willing to loan out the Morocco international while also including a non-compulsory option to make the deal permanent — something that will be important for the Catalan giants if they are to bring him in.

Ziyech already has a January offer from Borussia Dortmund, but is waiting to see what Barcelona do.

The Blaugrana have also made contact with Bayern Munich regarding a possible move for Coman, but the idea of a loan move has been completely written off, making it less likely that they will be able to secure the France international’s services.

It is made clear that Xavi will have the final say on who is brought in — with those behind the scenes at Barcelona doing their utmost to give him the best options — and the manager aware that it will be difficult to sign quality players amid the club’s current financial difficulties.

– Aurelien Tchouameni has been linked with most of the world’s biggest clubs in recent months, and El Nacional are now stating that Real Madrid will battle with Chelsea to sign the France international from Monaco. It is being reported that Roman Abramovich has already begun negotiations with AS Monaco and is willing to make an opening offer of €38 million to sign the midfielder in January. Los Blancos will now need to make their move, with Tchouameni preferring a transfer to Madrid, even if Cesc Fabregas is trying to persuade him to join the Blues.

– Dejan Kulusevski could leave Juventus either on loan or permanently in January, with Arsenal and Tottenham Hotspur his most likely destinations, according to Calciomercato. He has struggled for Juventus this season, with his only goal coming against Zenit St. Petersburg, and it is reported that it will be difficult for the Sweden international to join another Serie A club despite interest from Atalanta and suggestions that he could move to Fiorentina as part of a deal for Dusan Vlahovic.

– The Times reports that Newcastle United are looking towards Serie A as the Magpies aim to strengthen their squad in January. The outlet says that Newcastle are aiming to bring in Internazionale duo Stefan de Vrij and Marcelo Brozovic, as well as Lazio goalkeeper Thomas Strakosha. The latter two have contracts that end in 2022, while De Vrij’s comes to its culmination a year later.

– With Alexandre Lacazette‘s contract coming to an end in the summer of 2022, Arsenal are not willing to offer the Frenchman a long-term deal, but a shorter one is not off the table, says The Athletic. The Gunners are mindful that a new deal for Lacazette could have a domino effect on the development of their younger forwards and restrict their ability to bring in a new frontman.

– AC Milan have scheduled a meeting with Mino Raiola to discuss Alessio Romagnoli‘s contract situation, as his current deal is set to end in the summer of 2022, according to a tweet from Fabrizio Romano. He adds that there is no update on Frank Kessie’s situation, while Milan will soon announce Stefano Pioli’s extension, which will keep him at the club until June 2024.