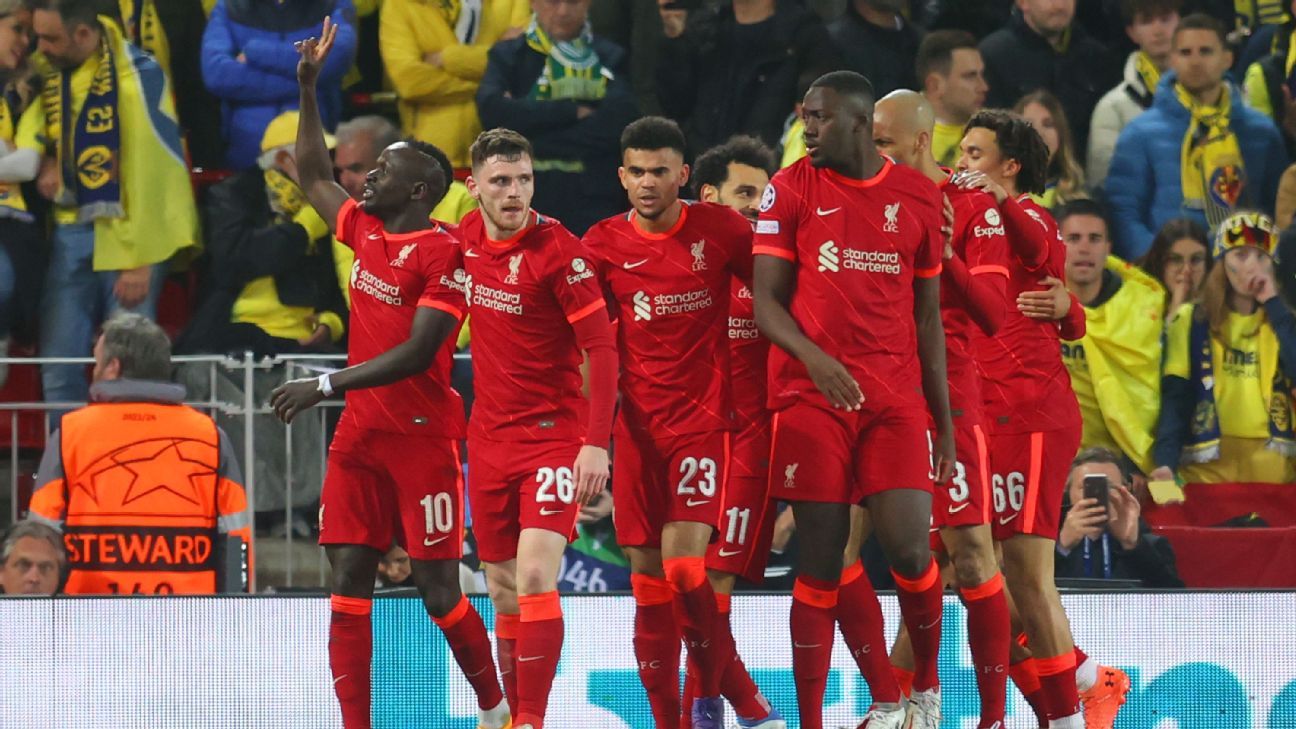 LIVERPOOL, England — Don’t be fooled by the narrow margin of the scoreline. Liverpool‘s 2-0 victory over Villarreal at Anfield was the most one-sided semifinal you are likely to see and could and should have been so much more for the six-time European champions.

But 2-0 may well be more than enough to keep Liverpool’s dream of winning four major trophies in one season. Unai Emery’s team still have 90 minutes in next Tuesday’s second-leg to salvage this tie and reach the Champions League final in Paris on May 28, but it would go against all logic and statistical evidence to believe that Liverpool will succumb to what seems an unthinkable Villarreal fightback.

“It’s 2-0 at half-time [in the tie],” Klopp said. “This is the best example of a score when you have to be completely on alert. We will have to be 100 percent in the right mood and play the second-leg in exactly the same way we played the first. The score is fine, but we are not through.”

This competition has certainly given us plenty of remarkable second-legs in recent years, including Liverpool overturning a 3-0 deficit against Barcelona to win 4-0 in the return fixture. If Villarreal are able to eliminate Jurgen Klopp’s team at Estadio de la Ceramica, it will be in the same league of shocks as that unforgettable night at Anfield in May 2019.

But Liverpool’s failure to translate their dominance into a winning margin more reflective of the game means that Villarreal, last season’s Europa League winners, still have a glimmer of hope in the second leg. The “Yellow Submarine” have ended the European ambitions of Arsenal, Manchester United, Juventus and Bayern Munich over the last 12 months, so Liverpool will not take them lightly, but the reason why Klopp’s side were so in command during the first leg was precisely because they did not underestimate Villarreal.

Juventus and Bayern both failed to recognise the danger of Villarreal on the counter attack and paid a heavy price, but Liverpool made no such mistake and their defensive concentration was as important as their attacking flair. By the end of the game, Liverpool had registered 20 attempts on goal compared to Villarreal’s one. According to official UEFA statistics, Liverpool had 93 attacks (Villarreal managed just 15) and completed 645 passes as opposed to 182 by Emery’s team. In terms of possession, Liverpool enjoyed 68 percent over the 90 minutes.

That they only won 2-0 was down to missed chances as well as Villarreal’s organisation and defensive discipline. In the first half, the Spanish team gave a masterclass in defusing the atmosphere, slowing the game down, time-wasting and denying Liverpool the space to play at their usual breathtaking pace. Villarreal’s approach frustrated the home side and quietened the crowd — an achievement in itself at Anfield on a Champions League night — but there was always a sense that the dam would break if Liverpool continued to pour forward.

It was all about game-management and patience, something which was made easier by the presence of Thiago Alcantara in the Liverpool midfield, with the former Barcelona and Bayern player ensuring that nobody in a red shirt panicked at Villarreal’s attempts to suffocate the game. But once Fabinho had a goal ruled out for offside on 50 minutes, it was clear that Liverpool were ready to race through the gears in pursuit of an opening goal, which came three minutes later when Jordan Henderson‘s cross beat goalkeeper Geronimo Rulli after being deflected goalwards by Pervis Estupinan.

The goal brought relief and greater urgency and Sadio Mane doubled Liverpool’s lead two minutes later when he poked the ball underneath Rulli after being set free by Mohamed Salah. In the blink of an eye, Villarreal had gone from being firmly in the tie to having to cling on with their fingertips. Andy Robertson then had a goal ruled out for offside and Virgil van Dijk and Luis Diaz both went close to adding to the scoring, but Villarreal held out to lose only by a two-goal margin.

This Liverpool team is too good to surrender a two-goal advantage in a Champions League semifinal, even though they conceded a total of seven goals in their last two semifinal away ties under Klopp, in 2018 and 2019. While Premier League rivals Manchester City must defend a one-goal lead against Real Madrid in the Santiago Bernabeu next Wednesday following their 4-3 first-leg win, Liverpool’s challenge is nothing more than routine.

Klopp will remind his players of that night against Barcelona, when nobody gave Liverpool a chance, and urge them to be wary of Villarreal achieving their own miraculous comeback.

“I looked at Villarreal and the way they were organised was a lesson for me,” Klopp said. “But we should not forget that we are good as well. “It will be difficult, but the best way to deal with a 2-0 lead is to ignore it and start again at 0-0.”

For Villarreal and Emery, though, there is still defiance and a belief they can pull off a shock.

“[Liverpool] are going to suffer more than tonight in Villarreal,” Emery said after this game.

That may prove to be the case, but the reality is that Liverpool and their fans can start to make plans for Paris.