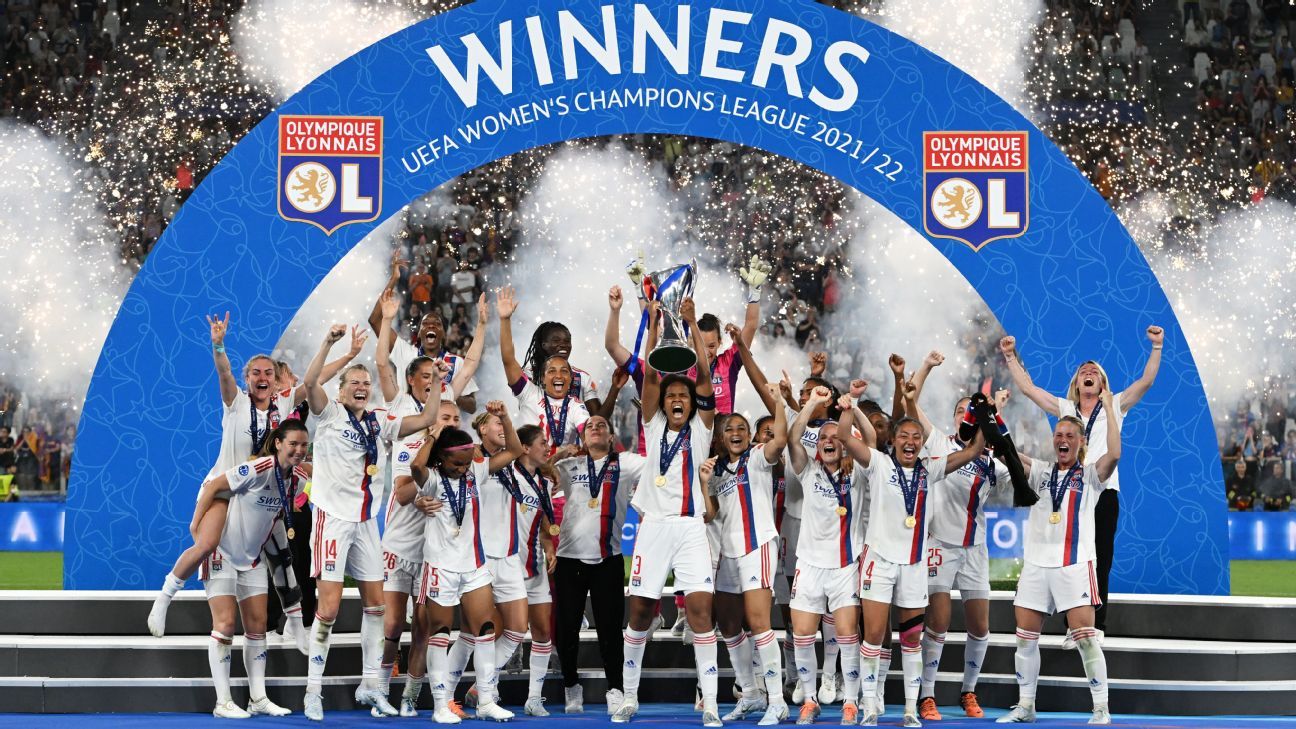 TURIN, Italy — There is a cliché that this is just Olympique Lyonnais‘ world and we’re all living in it, but there is substance in the trite.

Lyon might not have been perfect in Saturday’s pulsating Champions League final, but their 3-1 win over Barcelona was a convincing and richly deserved one. From Amandine Henry‘s sublime curler less than ten minutes in to the staunch and resolute defending of the perennial champions throughout the last ten minutes, Lyon proved that their strengths are to be found from the top to the bottom of the team.

In Lyon’s second goal and eventual game-winner, Ada Hegerberg‘s header widened the open gap when she slipped behind Mapi Leon half way through the first half. In the moments that followed, panic overcame a Barcelona team that possibly saw the match slipping away early on, and some calamitous defending opened the door for Catarina Macario to nudge a third home ten minutes later, all before the half-time break.

For Barcelona, the proceedings may have looked like déjà vu.

Before the final 2020-21 final against Chelsea, the biggest day in Barcelona’s history was the day they reached their first Champions League final. It was the day the well-crafted team from Spain’s Northeast put in their bid to be supreme rulers of Europe, to unseat then-champions Lyon. Yet, the match was over before it began — the goals from Lyon had come like body blows, or a thick red stamp thumping down on Barcelona’s application for European glory: “DENIED” it read over and over.

Two years later, Barcelona got another shot at the trophy — it’s new biggest day couldn’t be spoiled by Lyon again as the seven-time Champions League victors had dispatched at the quarterfinal stage of the tournament by Paris Saint-Germain, who themselves were knocked out by Barcelona. A year later though — on a Saturday ripe with humidity at Allianz Stadium in Turin, Italy — the Catalans were again facing down their biggest day. This time it was about retaining their title, about finally beating the Lyon side they had never vanquished.

This time Barcelona were listed as favourites — in some circles at least — much to the chagrin of Lyon, a team who hadn’t lost a Champions League final since 2012-13. With their win on Saturday, Lyon now has eight Champions League trophies — four more than any other side — including six of the last seven.

There is a special kind of dimensionality to Lyon — as well as having one of the best teams in Europe for over a decade, there is an understanding of their own dominance. These are players who know how heavy the Lyon shirt is, they understand the weight of expectation that comes with wearing it, and when that pressure sets in and the light white cotton could turn to chainmail, forcing the players to slink into themselves, they stand proud.

The success of Lyon, of each Champions League final, of each trophy is woven through the fabric of that shirt, but like the oppressive humidity at the Allianz Arena that would be too much for most to bare, those who have the honour of wearing that badge, never seem to sweat. Even when Barcelona pulled a goal back through Alexia Putellas late in the first half, the Lyonnais did not falter but instantly snuffed out the next attack from their opposition. With 14 assists for the French giants coming into the game, Selma Bacha dazzled on the wing during the first half, demonstrating how she has become a tireless creator under Lyon coach Sonia Bompastor.

Most will know the story of Lyon, of owner Jean-Michel Aulas’ dedication to his women’s team, of how — by pledging to treat the women as equals — he’s created the finest dynasty in women’s football. Some might think it happened over night, that the pieces all fell into place with the unparalleled investment, but Lyon is a team that had to mature, had to grow, had to fail and succeed to get to where they are now. The team had to learn how to deal with the big European nights and where others might have succumbed to anxiety as Barcelona tried to turn the screw late in the match, Lyon remained calm, with complete faith in their own abilities.

Lyon have gotten stronger every season, not just by continued astute recruitment, but by pushing themselves to the limit, of always asking more from themselves. Of seeing the landscape of women’s football change and develop as the sport has desperately tried to keep pace with the 32-times trophied team and asking themselves how they can keep their noses ahead. The Lyon players who won their first or even their fourth Champions League titles (in 2010-11 and 2016-17) would likely not have been able to find what they needed across the pitch to win in Italy, but as the game has grown and improved, so have Lyon.

Even for those who say the standard in France is simply not high enough and these players rarely find themselves tested, the simply rebuttal is the training sessions at Lyon rival the level of competition in real matches elsewhere. The environment at Lyon is one that allows the players to blossom and test themselves against each other, the best players in the world. That is how they grow, and when it comes to the thrashings they dish out across France — and further afield — they are shows of force and tests of mental agility.

Like every facet of the team, the ironclad mentality hasn’t come overnight but has been cultivated and become a signature of the side. As Henry, who formerly played stateside with the Portland Thorns in the NWSL, explained: “In Portland I learned a positive attitude because the stronger mentality, it’s very hard, and in Lyon now we have the same mentality.”

But there is possibly no player on the roster who embodies the mental fortitude to the point of wearing it a shield like Hegerberg. Having played a starring role three years ago, Hegerberg lead the line for Lyon with the determination she’s showed so often before for her club and she only seems to be a more rounded player since her 20-month injury lay-off.

“Ada is a leader on the team and we need her because she lost a lot of months and when she’s come back, she’s had an aura and it’s very important for us,” Henry told ESPN.

Although it’s easy to reduce the match down to the goals, as Henry noted in the post-match press conference, the performance from Lyon was a complete one with each player playing their part: “It’s the whole team that has won this trophy this evening. It’s the teamwork that we need to be focusing on first and foremost.”

This season has seen UEFA try something different with the women’s Champions League, reformatting the tournament to aid development and push parity as well as more scintillating matches — and there have been many success stories out of the season. Yet, all roads had to lead to Torino, to that beautiful shapely trophy that would be lofted at the Allianz Arena and, on the night, Barcelona were a worthy opponent.

This final was one of the more engrossing in recent years, with Barcelona looking capable of the comeback that never came. In that sense, the final was probably not so much a sense of déjà vu as it was of Phil Connors waking up on Feb. 2, Groundhog Day — the sense that no matter what the road to the podium looks like, it will always be Lyon atop of it.

Barcelona, like Wolfsburg before them, have been frozen up by Lyon — but Feb. 3 will come one day, the icy winter Lyon reign across women’s football will diminish and many teams will emerge from the melting frost, the entire sport a better place for all that Lyon have and continue to give to it, even if the scales seem so painfully unbalanced right now.

That time, however, is not coming anytime too soon.