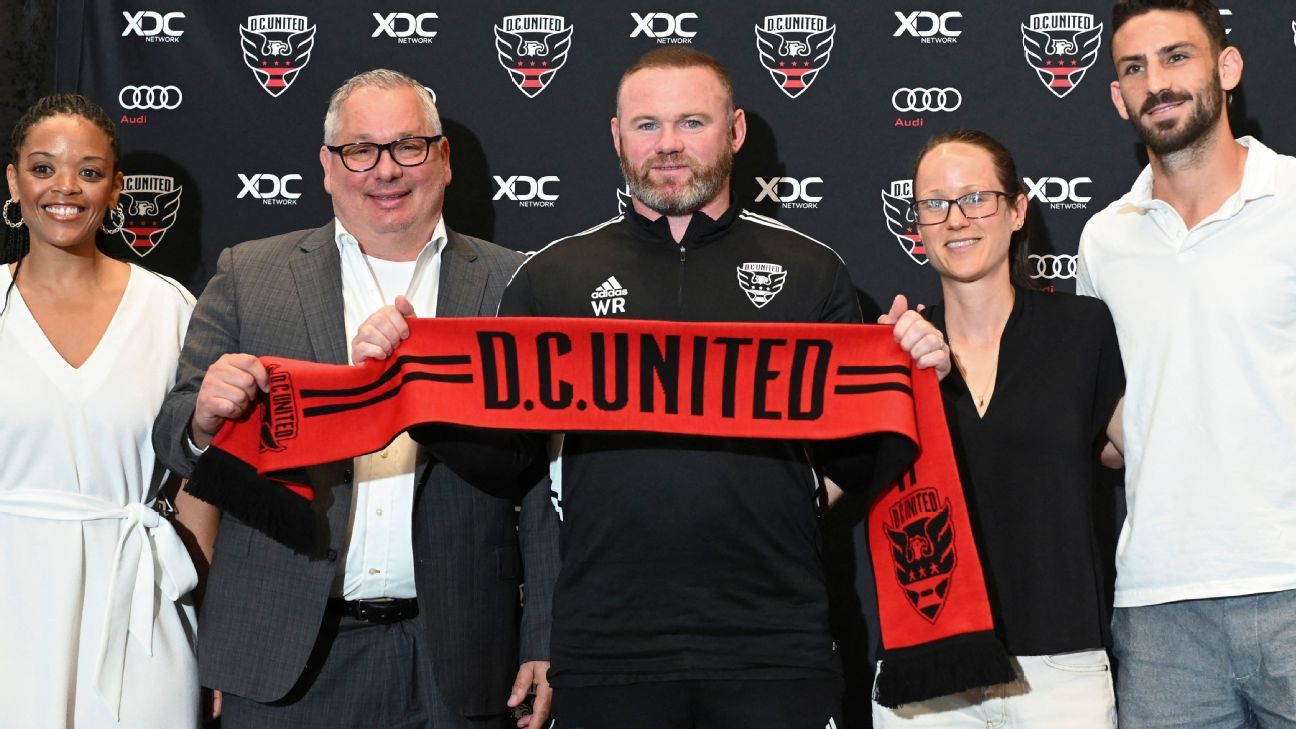 Wayne Rooney has taken part in a Major League Soccer minor miracle before. In 2018, the ex-Manchester United and Everton striker joined a floundering D.C. United side in midseason, and sparked the Black and Red to 40 points in its last 20 games to secure unlikely spot in the postseason.

It almost didn’t matter that DCU got bounced in the first round by the Columbus Crew. Rooney, with 12 goals and seven assists in 21 league and playoff appearances, had shown the club and its fans a tantalizing glimpse of what was possible, encapsulated by his sprint-tackle-dribble-assist sequence that set up a game-winner by Luciano Acosta and clinched a 3-2 win over Orlando City SC.

Four years later, another bit of divine intervention is being asked of Rooney as he was announced as D.C.’s new manager on Wednesday. United are enduring a complete mess of a season, and are currently tied for the fewest points in the league alongside the Chicago Fire. DCU did manage seven points from a possible 12 following the firing of Hernan Losada on April 20. But as is often the case with such maneuvers, it proved to be the proverbial dead cat bounce.

The Black and Red have claimed just four points in seven games since, and now with just 17 matches left in the season, it’s up to Rooney to reverse the team’s fortunes. His time will actually be even more limited than that. Until he obtains his work visa, which sources say could take one to two weeks, he’ll be limited to observing training and games. While there figures to be plenty of communication in the background, it’s far from optimal.

There are legitimate reasons to expect Rooney to improve things, beyond the fact that they can’t get much worse. There is something to be said about presence and charisma. The level of respect for him within the organization and the players couldn’t be any higher. He was widely lauded for the work he did with English Championship side Derby County amid crushing penalties for the club’s financial situation, so he knows what it’s like to work amid onerous circumstances.

Rooney’s previous experience in MLS will also serve him well. While playing and managing are two completely different jobs, there will be little in the way of surprises in terms of the travel demands, extreme weather, the roster limitations and overall cadence of the league.

Rooney also appears to have a sharp sense of what kind of player works in MLS. While he didn’t completely write off bringing in Luis Suarez (who claims to have offers from several MLS clubs in hand), Rooney said, “I want players who are hungry” but who “also have got a lot to give and are capable of playing every game.” He understands that goes a long way in MLS.

The fact that Rooney is reprising his role as savior is an indictment of D.C.’s overall direction since he left following the 2019 season. His hire is being characterized as a giant step forward, but looked at another way, one could argue that the reliance on the Englishman shows the organization is going in circles, complete with mismatched parts. (Ola Kamara as a support striker? Really?) At the other end of the field, DCU have shipped 39 goals in 18 games, a rate that threatens FC Cincinnati‘s ignominious single-season record of 75 set in 2019.

Rooney will certainly aid in the Black and Red being more organized and tougher to play against, traits that were clearly lacking in the 7-0 thrashing at the hands of the Philadelphia Union last Friday. There is also gravity to go with the gravitas, with Rooney-inspired reinforcements presumed to be on the way as well. There are two open Designated Player spots ready to be filled.

D.C. United GM Lucy Rushton said the club will be looking for help in midfield, and the recent ACL injury to Brad Smith points to an immediate need for a left-back.

“I think we need help in probably transitioning from defense to attack and getting the ball in good attacking moments,” she said. “I also think we probably need a little bit of steel and bite as well, in midfield — a bit of roughness — and the leadership that often goes with that kind of position.”

Rooney’s presence will only take D.C. United so far, though, and there are questions that need to be addressed as the feel-good factor of his arrival wears off. Is the structure in place to maximize Rooney’s ability? How jarring of a course correction tactically will Rooney’s arrival be? What will happen when the inevitable day arrives that he announces that he’s leaving for a bigger job? Have plans been formulated to sustain what he puts in place?

Rushton, who has been in her role for 15 months, insists that Rooney wouldn’t have taken the job if he didn’t believe he’d have the necessary support. Fair enough. But she admitted there will be a bit of transition as Rooney takes over. She said that Rooney’s tactical approach, while containing some elements of a pressing style, won’t be as pedal-to-the-metal as Losada’s was, especially given United’s defensive fragility. The time for fluid soccer can come later.

“I’d say probably more of a controlled kind of press,” said Rushton. “So I think it’s probably going to be a little bit different in that respect. I think first and foremost, being defensively compact. We’ve conceded for too many goals this season. So I think that’s an area we really need to obviously work on, and figure out.”

Rooney’s arrival may not mean a 180-degree turn from Losada, but it’s still a change in direction nonetheless, so it will take time to get everyone on the same page. That is a commodity that neither DCU nor Rooney have much of.

In terms of Rooney’s long-term future, he certainly wouldn’t be the first manager to use MLS as a stepping stone to bigger things. Gerardo “Tata” Martino, Patrick Vieira, Jesse Marsch and most recently Ronny Deila all moved on after achieving varying levels of success in MLS. But in the case of New York City FC and the New York Red Bulls, the philosophy has remained. Will the same be true in D.C.? It will need to be if Rooney’s second spell in the nation’s capital is to have any kind of long-term benefit.

Major League Soccer is here! Coverage of all 28 teams with live games, replays, highlights.
Sign up now to stream soccer on ESPN+

Rushton says that comes down to creating an identify as a club, attracting players who fit that style and then recruiting and scouting evolve from there. How would she describe that identity? Rushton insists that process has been ongoing, and to be fair, she joined the club after Losada was hired prior to the 2021 season.

“I think our identity has to be a very hard-working, playing-on-the-front-foot team who is defensively compact and tight, but aggressive going forward,” she said. “And I think you’ve seen that from us over the last 18 months as well, in terms of how we go out and press teams, how we play in the final third. I don’t think that’s changed. I think we still want to be that attacking and entertaining team, but we need to be doing it from a more compact and a more defensively robust kind of [foundation].”

Rushton admitted that the team’s overall identify is now “in transition slightly” because Rooney will have his own way of doing things, though. That foundational work still needs to be done, lest there be another cultural course correction when he eventually departs.

None of this is meant as a criticism of Rooney’s hiring. If you have a chance to hire a manager of his stature, even given his relative inexperience, you take it. He clearly cares about the club, and if his stint there as a player is anything to go by, he will put his heart and soul into the job.

“I know it’s going to be a lot of hard work which we have to put in, [myself], I have to put in,” Rooney said at his unveiling. “The players have to be in. I have demands, principles which the players need to stick by.”

It’s not just the work of the manager that needs to improve for DCU, though. Everything around Rooney needs to be better, be it support structures, recruitment and the like. The ensuing months will reveal the extent to which that happens.