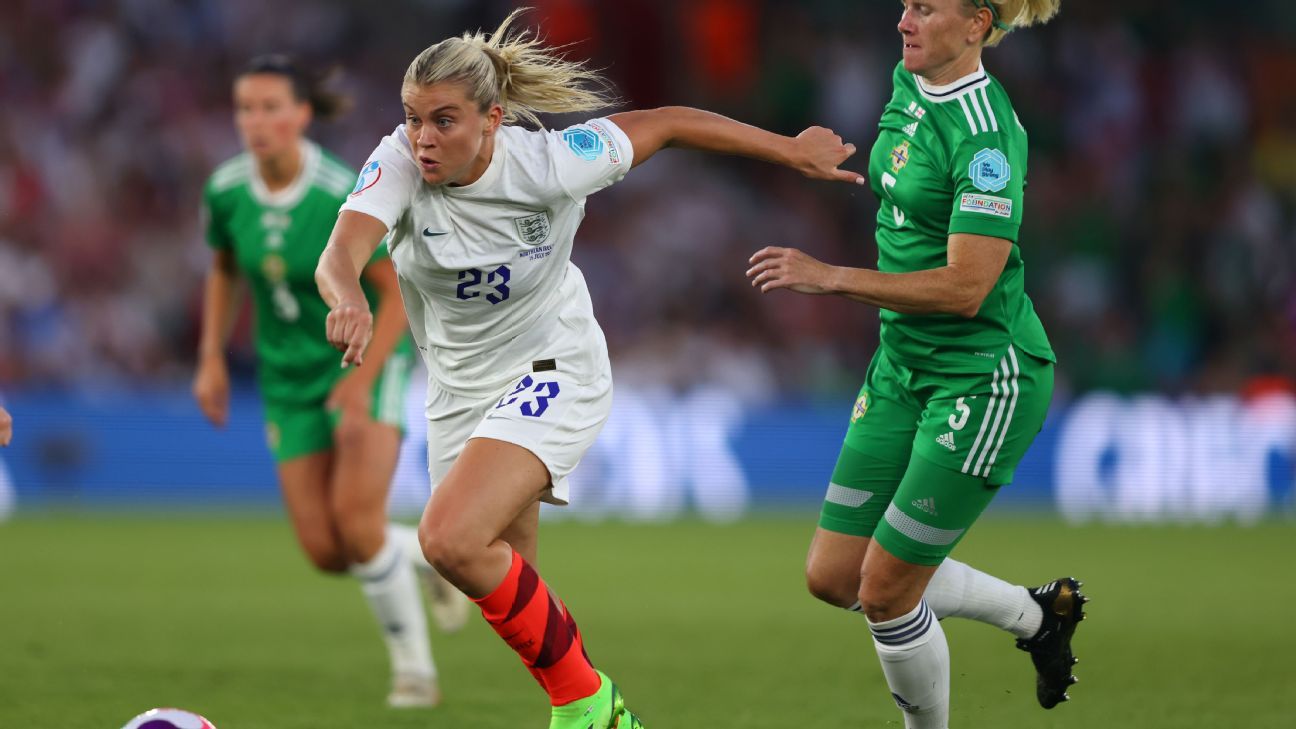 SOUTHAMPTON, England — England striker Alessia Russo has said the quarterfinals is “where the pressure hits” after her side completed a perfect group stage with a 5-0 win over Northern Ireland at St. Mary’s Stadium on Friday.

Russo, 23, came on at the start of the second half for Ellen White and scored two goals in five minutes to add to goals from Fran Kirby, Beth Mead and a Kelsie Burrows own goal.

Her second goal included a particularly impressive turn and she was named player of the match despite only being on the pitch for 45 minutes.

England will now face either Spain or Denmark — who face each other on Saturday — in the quarterfinals.

“I think the group stages have gone very well. We’ve grown in performances but there are lots of things we need to work on and improve on,” Russo said in a news conference after the match.

“We’re in a good place but this is where the pressure hits in this part of the tournament so we need to be ready to go.

“There’s so many top talented sides in this tournament. We’re excited to go into the quarterfinals but we have to be ready for what’s to come because this is where the heavy hitters meet.”

Northern Ireland coach Kenny Shiels said after the game that it would be a “failure” if England didn’t win the entire tournament.

“It would be a massive failure if they didn’t win this tournament. They’re home and hosts. Everyone else should just go home,” he said.

His side ended their first major tournament with three losses and just one goal but he added that lessons had been learned.

“We learned from playing against teams like England and playing in a way in which we are trying to get better. We keep working at it and working at it and maybe someday we will score a goal against England,” he said.

Despite their flawless performance which included scoring 14 goals in the group stage without conceding one, England’s tournament has been affected by COVID-19. Coach Sarina Wiegman was missing from the sidelines on Friday having tested positive that day while Lotte Wubben-Moy has just returned to the side and White also had some time outside camp after testing positive.

“We spoke about lots of potential scenarios and this [COVID-19] was one of them — my compliments go to the staff and players group because we reacted really well.” England assistant coach Arjan Veurink said after the game.

“We plan for scenarios and the world we are living in, it could happen — we spoke about it and we’re well prepared. She’s managing the staff and players brilliantly.”

England players will now be given some time off to recover after the group stages before a two-day run in of preparation for their quarterfinal on July 20. It remains to be seen whether Wiegman will be able to rejoin them for that match.

“We have to see – we have to manage it day by day, hopefully she is back in business as soon as possible,” Veurink said.