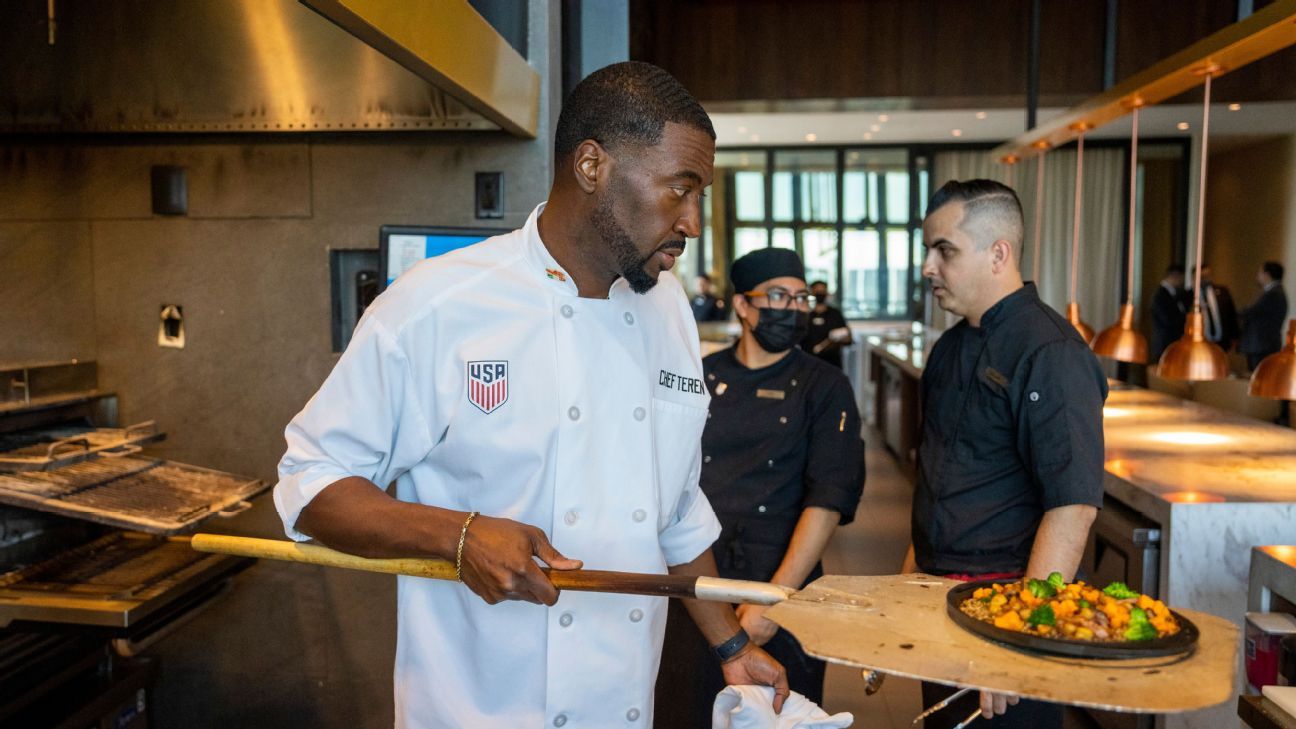 MONTERREY, Mexico — Hamburgers, pork chops, mac and cheese: It’s hard to pick a favorite dish. That’s not even mentioning the custom vegan plates that turn heads at every meal.

Away from the field and the pressures of qualifying for the World Cup and Olympics, food is the talk of the U.S. women’s national team at the CONCACAF W Championship. And Teren Green might be the most popular person on the team.

“He’s great, such a good chef,” U.S. defender Sofia Huerta said, raving about everything from tacos to avocado toast. Huerta and her teammates already qualified for the 2023 World Cup, and they will try to clinch a spot in the 2024 Olympics on Monday.

Green — or “Chef T” as he’s known to just about everyone — is the team’s personal chef brought in during big tournaments, cooking every meal for players and staff. Three times per day — four on game days for the late-night, postgame meals — he oversees the fueling of the two-time defending World Cup champions.

Framed like that, it can sound like a stressful job, but what sets Green apart is his ability to make popular food while keeping mealtime fun. Part of that process is allowing players to have a say in the menu. Each player gets an opportunity to design the menu on a given day. The staff will put out a poster with the player on it to celebrate their choices, none of which ever disappoint once prepared.

Emily Fox and Megan Rapinoe celebrated birthdays early in the CONCACAF W Championship in Mexico. Fox opted for a local flair: tacos and ceviche, then churros for dessert. Then came the birthday cake, along with a team singalong that the introverted Fox said Rapinoe enjoyed a bit more.

This collaborative effort between chef and team is a window into how Green operates — and why he is such an important member of the team. He carries with him lessons he learned as a young chef at The Sagamore, a luxury resort overlooking Lake George in upstate New York: his role is not just about food, but exceptional service and experience.

“I feel like mealtime is a big part [of the environment],” Green said from a chair in the private dining area the team blocked off and customized atop its hotel. “We have it three times a day and we want it to be the best three times a day. We want everyone happy, we want everyone to have what they want. We don’t want anyone to feel left out, so I’m constantly asking for requests. Tell me what you want. We’ll make it happen.”

Green, 33, is a self-taught chef who got his start at a small restaurant in greater Detroit, working his way up from prep work and dishwashing to entrees. He left for the opportunity at The Sagamore to advance his skills before returning home to Detroit to work atop the famous Renaissance Center looking over the city.

Then he got his first shot in sports through a connection, working with the NBA’s Detroit Pistons. Green started as one of five chefs, brushing elbows with Stan Van Gundy, Andre Drummond and Reggie Jackson. After a few weeks, Green said, the players requested him exclusively. Soon, they started inviting him over to their houses to cook and hang out. Green’s popularity had as much to do with his hospitality as his food, he said now.

“Most of the time they didn’t really want to eat, they just wanted a friend,” Green said. “I’d come over to cook, I’d cook a meal, and then they were like, alright, let’s go play [NBA]2K or let’s go to the movie theater that they had in their home.”

U.S. women’s national team players have taken to “Chef T” as well. Green made a connection to the team ahead of the 2019 World Cup and served as chef for that entire tournament, which the U.S. won. He was back again for the Tokyo Olympics last year, and he joined the team again ahead of the 2022 CONCACAF W Championship qualifying tournament. His full-time gig is cooking for MLB’s Detroit Tigers when they are playing at home, and they work with him on the occasions he leaves to join the U.S. women.

Green is a tall figure with a quiet, humble demeanor. “It’s not really about me,” he said of his work. He blends in seamlessly with the team, serving an integral role behind the scenes, which at its core is designed to help everyone else do their job better.

“When you bring anyone into a mix of delegations, it isn’t just your skillset — it’s about the fit,” U.S. women’s national team general manager Kate Markgraf said. “He definitely fits. He’s a big element [of the team], but he’s a value-add. He’s someone that different people gravitate towards. And when you see his face, the players all go, ‘Chef T’ because he’s a non-threatening, supportive presence, which is something that you need in this environment.”

A chef is officially a professional support position that U.S. Soccer provides at its own discretion. Markgraf said it should be an investment all teams are making.

Becca Roux, the executive direction of the USWNT Players Association agreed. “It’s fantastic that USSF has recently brought in a chef to most U.S. major tournaments and qualifiers as it is a health, safety and performance advantage,” she said.

The U.S. women’s national team’s staff is large, so Green does not work alone. He meets with the team’s head of performance, Ellie Maybury, and the team’s dietitian, Lindsay Langford, to build guidelines around what the team should eat: more carbs before a game, flexibility to indulge after a game.

Then, Green takes those guidelines and builds menu ideas, working with local chefs at the team hotel. He will make sure hotel kitchen staff know the team’s nutrition guidelines and objectives of any given meal, and then they’ll collaborate. Typically, Green does not get to watch the first game of a tournament because he needs to get the local staff assimilated with postgame operations, but he can be found at the stadium, enjoying a game, like during Thursday’s 3-0 win over Costa Rica in the tournament semifinal.

Green said he likes to lean on the local expertise of chefs and use local ingredients, all of which are sourced for their quality. In Monterrey, that means using authentic Mexican sauces and “perfect” avocadoes. At the Olympics, it was everything from Ramen to Wagyu beef and Miyazaki mangoes, an expensive, candy-like version of the fruit.

“You’ve got to have respect for the kitchen,” Green said of entering new environments. “I’m glad that I know how to walk around the kitchen properly and move around to where I’m not offending anybody.”

Players notice the attention to detail. Green did not grow up on soccer. His first women’s soccer game was when he got his first shot with the team, at a training camp in St. Louis, Missouri, in 2019. Immediately, there was reciprocal respect.

“They’re great,” he said. “They don’t hold anything back. They’re extremely appreciative, which is one of the reasons why they’re my favorite team to work for.”

After the CONCACAF W Championship ends, Green will return to his regular job working for the Detroit Tigers. He already has his eyes on the 2023 World Cup, though, wondering aloud which types of cuisine he needs to start experimenting with from Australia and New Zealand.

Scroll through Green’s Instagram page and among the mouth-watering photos of his dishes, you’ll find him holding the World Cup trophy on the field in Lyon after the U.S. won in 2019. Rapinoe gave him a personal shout-out on the steps of New York City Hall during her speech after that victory.

It was there in France where that special attention that Green puts into his craft became obvious to players. Among the team’s practicing vegans is Alex Morgan, who was on that squad and is back with the team for the CONCACAF W Championship. Green said he feels for vegans because they can’t always eat exactly what they are craving, so he puts an extra effort into their meals, serving them directly instead of via a buffet setup. Soon, more players wanted in on that experience.

“When we went to France, there were maybe two vegans,” Green said. “By the end, there were about six. I build the plate specifically for them and make it nice and fancy and deliver it to them. When the other players see that, they’re like, ‘Oh, I want a meal brought to me, too.'”

Now, the newer players notice, too. This training camp is the first Huerta has experienced with “Chef T,” but she said the appreciation of his work is strong and the connection he makes with players is immediate.

“The food here has been amazing, and obviously that’s really important being a professional athlete, the nutrition aspect of it,” she said. “He’s so good and he knows exactly what he’s doing. That’s just something that, when you don’t have him here, that’s something you’re worried about or you’re thinking about. Having him here, though, that’s taken care of. You don’t have to worry about anything you are putting in your body. He’s so sweet, he takes care of us. He’s so valuable and important to the team.”

Of course, there’s always room for some cheat meals to keep things fun. After the squad’s 1-0 win over Mexico on Monday, that meant filet mignon at 1 a.m. Sometimes it means ice cream. Even the boss is on board with a little fun.

“The mac and cheese postgame — and I don’t usually eat mac and cheese,” Markgraf says, “it’s the best thing I’ve ever had in my life.”

USMNT has no answer for Japan in friendly loss
Pulisic, Fred, Hazard: Players who are better for their country than their club
Juve report record €254m loss after poor season
Are Gerrard and Lampard the only options for next England manager?
Reyna won’t dwell on injury-hit 2021-22. He’s too focused on the World Cup