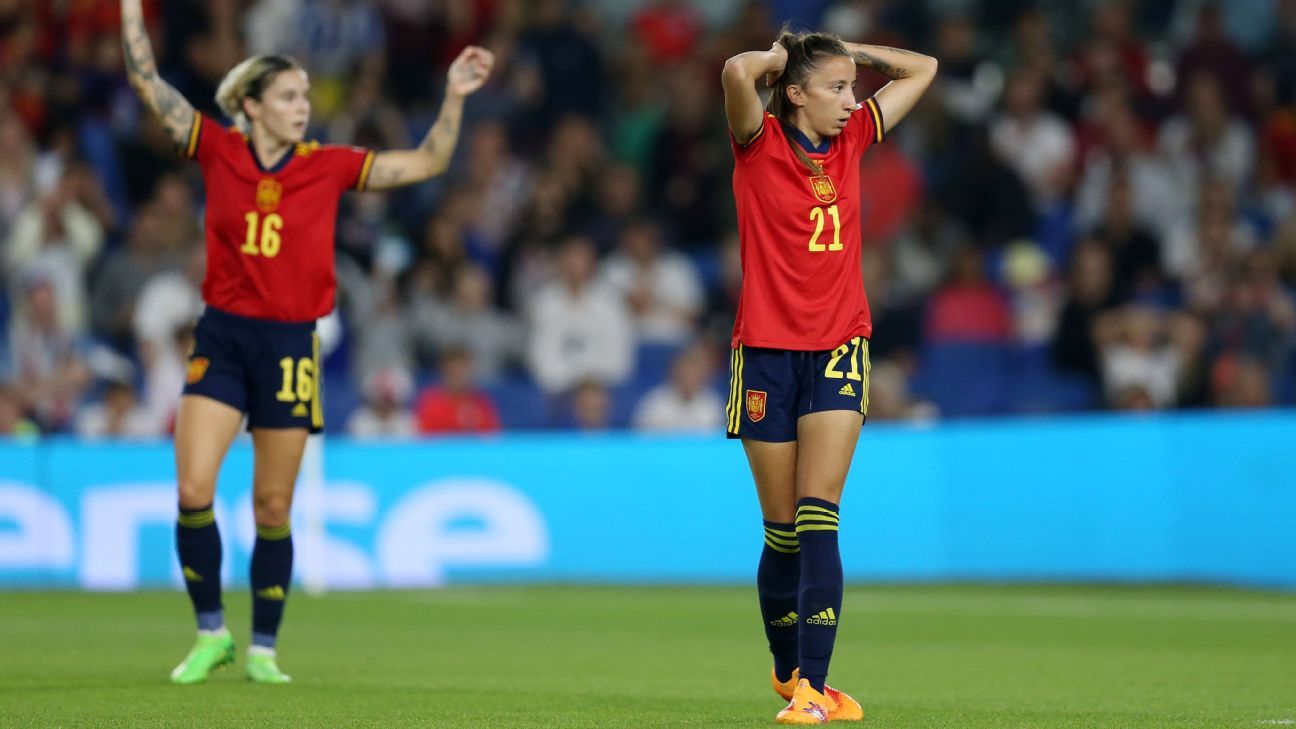 The end comes fast. A moment and it’s all over.

There’s something strange, slightly unreal about the moment when a team is knocked out of a tournament, however many times you experience it. On Monday night, as the sun set on Bisham Abbey and the media made its way to the exit, leaving the Spain team to complete the rest of the evening session without them, there were farewells. This place alongside the Thames, with its 13th-century manor house and its manicured lawns, had been home for two weeks, but they knew they might not be back.

The following morning the Spanish national team travelled to Brighton, where they played England in the Euro 2022 quarterfinals. Lose and they would be out; lose and there would be no more sessions to attend, no reason to return, just the end. Those people — like the chirpy security guard who had learned one Spanish line, “time to go, folks” — wouldn’t be seen again.

Most, in truth, thought Spain would lose, too. Spain’s players had got the idea that a lot of people thought they wouldn’t just lose, they would be destroyed. Which maybe suited them.

“England are favourites,” midfielder Patri Guijarro said. Coach Jorge Vilda went through their virtues, speaking so glowingly and so long, that it started to sound impossible.

And yet there they were two nights later, close now. They had done what no one else had done yet and scored against Sarina Wiegman’s side. Up 1-0 against England, in England, with six minutes left, within touching distance of reaching the semifinals. It was not just that they were beating England; they had taken England apart.

“The way they had played, the way they came into the game, everyone was saying ‘oooh, they’re going to score five’, and we played like that,” midfielder Aitana Bonmati said. “We gave them a bath.”

A bath is a kicking, a whitewash; they had schooled the hosts.

“On the pitch, I felt the nerves that they had: they didn’t stop talking to each other, you could see them looking at each other, arms raised, frustrated faces,” Bonmati added. “They were down. We had taken them somewhere that no one else had taken them. We took them to the edge.”

And then they stepped back from it. Spain had started to believe. It was really happening, they might actually do this. Everyone would be heading back after all; this journey was continuing, not ending here. The pessimism was gone, although the nerves now were just as bad. It was bedlam in Brighton, the noise like nothing it had heard. And England were relentless, throwing all they had at Spain. They were desperate now. Everyone was. And yet the chances weren’t quite happening, and time kept on.

One goal put England back in the game and took Spain out of it, furious at what they thought was a foul on centre-back Irene Paredes first, heads lost for a little while. On the touchline, reserve goalkeeper Misa Rodriguez booted a cooler. Another goal sent England through with a 2-1 win, as had always seemed likely when extra time came. Yet it was still one moment, one shot. And it was gone. All that, over. Just when they thought that maybe …

And so came that weird stillness afterwards, like something had been taken away, a change of plans. Flights to be booked, no point hanging around here anymore. Not players, although them too, but dozens and dozens of people, done.

As the Spain players went down the tunnel, there were tears. Bonmati and No. 1 Sandra Panos were discussing what had happened, nothing they could do now. Angry, numb. A couple of days later, they still couldn’t quite digest it. All that, for … nothing? It’s never really nothing but it does feel that way. It happened too quickly to properly comprehend. So good, but gone. Asked how she felt, Paredes said: “Hurt.”

There was not much else to say. The Spain players gathered in a circle in the middle of the pitch. Vilda told them he was proud of them, to leave with their heads high. Many left with tears in their eyes, some furious. Some bit their tongues. There was a lot to be pleased with but it wasn’t the moment. It had been suggested that they had not impressed in the group stage, struggling to find a way through, but Germany and Denmark, two of the most accomplished teams there are, had completely changed their style to protect themselves from Spain. And that says a lot.

As those remarks by the German and Danish coaches underlined, sometimes that style thing can be self-perpetuating, too: if you’re so good at keeping possession, opponents renounce the right to compete for the ball, and so you have even more of it. It takes two to tango. It takes two to tactics as well. When that happens, your chances of mixing it up are even less, and you have a packed, deep defence waiting for you. That’s not easy at any level.

Spain’s style is based on conviction, but it’s not just philosophy for fun: it is because they believe this is the best way to win. What’s to say changing that style would get better results?

Here was evidence, perhaps. Spain were Spain to the last. Or maybe they weren’t, not quite. The familiar and occasionally facile lament is that they lack a Plan B, but in the group stages they had scored three of their goals from headers, the other a penalty, and once they reached the knockouts Bonmati suggested the problem might have been the opposite: there was a moment when they stepped away from the Plan A, when they stopped keeping the ball, tried to protect themselves a bit, to get over the line. Maybe that’s only human: they could see it so close, and they tried to hang on a little.

“We deserved more,” Paredes said after the game. A lot of players had nothing to say and couldn’t quite believe it. Yes, there had been flaws, and no, it wasn’t a perfect tournament: you couldn’t help wondering if Vilda’s constant insistence that other teams were favourites might have had a negative impact. The third midfielder was not clear, Vilda trying four different players there alongside Guijarro and Bonmati. The strikers’ role wasn’t either. Chances had not been taken. Leila Ouahabi had lost her place at full-back. Against Denmark, they had lacked fluidity, and were caught too often, especially by Pernille Harder. They had needed a Panos save in the latter stages of the game to get through then.

But then just when nearly everyone thought they would go out, they were in. “To do something big you need a bit of luck,” Guijarro said. Spain had been desperately unlucky: they had lost the Ballon d’Or winner (Alexia Putellas) and the Ballon d’Or runner-up (Jennifer Hermoso) before the tournament. You try taking that off any team. They had conceded after 49 seconds on the opening day. Germany had been gifted a lead by a horrendous mistake, one moment of madness. And then they had played as well as anyone in any game and lost. The goal that changed it, they thought should have been a foul. Frankly, they felt cheated. And in the final analysis, they had done that to them.

Fourteen goals England had scored. Fourteen. They had conceded none. And then this happened. England had been taken to the edge, made to suffer for survival.

Make picks throughout the Women’s European Championship for a shot at $5,000.
Make Your Picks

“What we have seen suggests that no team was better than Spain,” Vilda said. He insisted: “We have a big future. Next time hopefully the wind will blow in our favour.”

“We have to try again,” forward Athenea del Castillo said. Bonmati said that she didn’t want to retire without winning a major tournament. She’s only 24 and the evidence was that she might not have to. But not this one. In the final analysis, they had also lost.

Bonmati and forward Mariona Caldentey in particular had been astonishing. Bonmati was a “joke,” one British commentator said, the best player he had seen, one whose touch and close control was such that she could “dribble round you in a phone box.” She controlled everything.

“My dad says I’m like a police officer,” she said, “directing the traffic.”

But, so what? She had been player of the match twice, against Finland and Denmark. She surely would have been again, but for that written rule that it has to be a winner. And yet asked about it, she shrugged.

“Two MVPs and a quite good performance. …”

“Very,” someone shot back.

“Thanks”, she said quietly, “but it’s no use: we’re out in the quarters. Individual awards don’t matter: I wanted to leave here with the team champions.”

One player admitted that she still couldn’t quite believe it the next day, already home before it had even sunk in. And the captain Paredes was struggling to articulate it, the emptiness.

“It’s a lost opportunity,” she said.

All that taken away in a moment, the end coming fast.