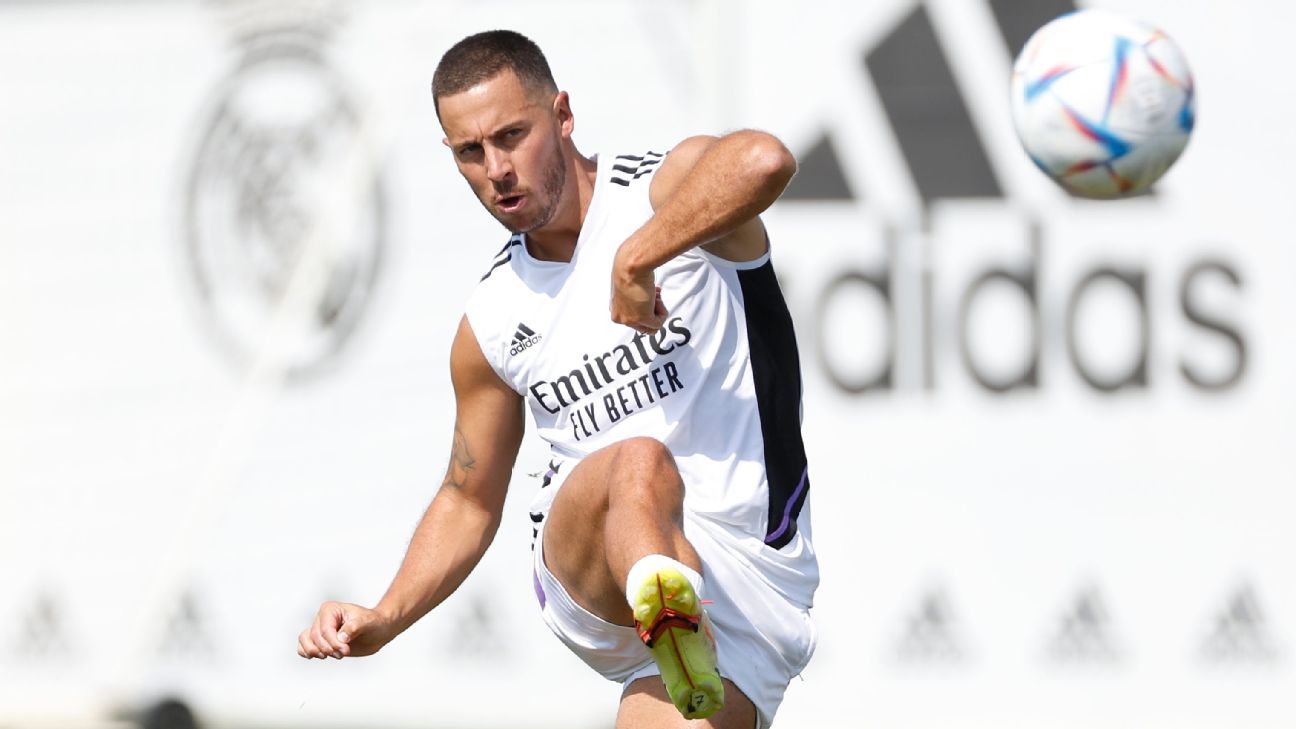 Three years into his Real Madrid career, it feels as though Eden Hazard still hasn’t really got started. Signed from Chelsea in 2019 as arguably the Premier League‘s best player, and fully expected to fill the void left by Cristiano Ronaldo‘s departure a year earlier, the Belgium international has instead become an afterthought in LaLiga and, to some, a punchline.

Hazard, 31, has won two Spanish titles and a Champions League with Real Madrid, but he played a supporting role in those successes. After arriving overweight — by his own admission — in the summer of 2019, things only got worse from there, as an ankle fracture in November 2019 was followed by surgery in March 2020 and the insertion of a metal plate in his right fibula.

If 2019-20 was, in Hazard’s words, “the worst of my career,” then 2020-21 wasn’t much better. More injuries followed, and he ended the campaign irritating the club and fans when he was pictured joking with former teammates after a Champions League defeat to Chelsea.

He was a bit-part player again last term, with his preferred position on the left of the attack monopolised by the season’s breakout star, Vinicius Junior. By March, feeling sick of ongoing ankle discomfort and related muscular injuries, he opted for more surgery to remove the plate that had been inserted two years earlier.

Hazard’s most headline-grabbing performance came when he took an unexpectedly high-profile role in Madrid’s trophy celebrations in May. “Madridistas, I’ve been here for three years, with a lot of injuries,” he said, after grabbing a microphone to exuberantly address the crowd of fans gathered at the city’s Plaza de Cibeles. “But next year I’ll give everything for you!”

They’re just words, of course, and Hazard will need to do his talking on the pitch. Nobody doubts his talent; there have been questions about his attitude toward training and whether injuries have robbed him of his ability to beat defenders. But there are some reasons for optimism. Hazard is said to have returned for preseason in shape and free of pain. In an unusual, demanding year — nobody knows how players will be affected by the midseason World Cup — and with Madrid not planning on signing a forward after missing out on Kylian Mbappe, he might get his chance as a back-up for Karim Benzema.

“My idea is to try Eden in [the false No. 9] position,” manager Carlo Ancelotti said last week. “With the qualities he has, it can be good for us to have him there.”

As Real Madrid begin their preseason tour of the United States — staying at Los Angeles’ Beverly Hills Hotel and training at the UCLA campus — Hazard spoke to ESPN’s Mauricio Pedroza about his hopes for this season and why he isn’t ready to give up on making his time at the club a success.

Editor’s Note: this interview has been lightly edited for clarity.

ESPN: How would you describe the importance of this upcoming season for you personally?

Hazard: It’s been a few seasons that I’ve not been playing that much, so for me, it’s like the [first] full one now with this club. I just want to show what I can do on the pitch. That’s my only target.

ESPN: What is the biggest challenge of this season, considering that the World Cup will be played in the middle of it?

Hazard: I’m good. I’m healthy, you know, thank you for that. I can play — I can do what I want on the pitch. So I hope I’m going to stay fit [for] two or three more years, I still want to enjoy my game, and that’s why I’m here.

ESPN: Because injuries seem to be part of the conversation around your career at Real Madrid, how have you been able to cope with that and not lose motivation?

Hazard: Believe me, it’s not that easy. You know, when you play football, you just want to be on a pitch. You try to know what’s happening, because I was not injured much [at Chelsea] before, and so it was something new for me. You have to learn how to take care of your body in a different way, but it’s a good challenge. Like I just said: I’m healthy, so I’m just ready to play.

ESPN: What changes did you make personally with your routine during the offseason, once the Champions League finished? Do you do anything different to get into the very good shape that you’re on right now?

Hazard: Not that much. You know, I spent two weeks with Belgium at the end of the season. I was able to play four games, not 90 minutes. And then in my mind I was like: “OK, I can play, I don’t feel it. I don’t feel any pain anymore. So let’s go forward, you know, and then I just enjoyed my holiday.” I work a bit between seasons — we only had one month just to be ready for the preseason.

ESPN: You pointed to your head [when giving that answer], which is interesting, because it’s one thing to be healthy to go back and train, but how tough is it for a player like you that the mental aspect is also on point while you’re dealing with this injuries?

Hazard: Yeah, but like I just said, it’s not that easy, especially when you don’t know why you were injured. I’ve been injured at times with Chelsea, but not like those three years with Real Madrid. I knew something was wrong with my body, so that’s why I asked to do surgery at the end of the season.

ESPN: When you see your club succeed like last year, winning LaLiga and the Champions League, but you’re not having the minutes that you want to have on the pitch, how would you describe that mix of feelings?

ESPN: What’s the biggest strength of this Real Madrid squad?

Hazard: I think it’s that we play well together, we have experienced players and we have newer players … we have a mix of generations. You know it when you see us on the pitch. We look like a real team. You know last year, we had a fantastic Champions League, but we were behind in so many games and just never gave up. We tried to just play until the end, and there were so many game like that. So I think it’s like a mix of things: a mix of generations and talent also, because we have plenty of talent in the squad and we’re just happy to be together.

ESPN: That’s a strength. Give me one weakness.

Hazard: We don’t have it! Sometimes we got tired a bit, but that’s it.

ESPN: If you were to present Karim Benzema as a candidate for the Ballon d’Or, what would you say on his behalf?

Hazard: Karim? I think he deserves it. You know, there’s no doubt about it. But I think he deserves it not just for that season, but for his whole career, you know? It’s like he’s been at the top for 15 years. Maybe he’s scoring more goals, which is why people just want him to win this Ballon d’Or, but I think he deserved it before, like five years ago. He’s our captain now and he’s also, like, a really good guy, you know? He’s not talking that much on the pitch, doing what he wants. He’s our leader. So we just pushed him to go for the Ballon d’Or.

ESPN: Part of the history of Real Madrid is that they have a strong squad and are always looking to make it even stronger with new signings. Were you surprised when Kylian Mbappe decided not to join Real Madrid?

Hazard: I think that is in the past now; we’re just focusing now on this season. He’s a player at Paris Saint-Germain, and that’s it. He made a choice and we have to respect it. And that’s it. We look forward to the season.

ESPN: Speaking of the next season, your rivals Barcelona are making a big splash with signings. Do you guys need your biggest rival to be strong again?

Hazard: It’s better for LaLiga when these kind of matches are like, “Wow, what a Clasico.” You know, [when Barcelona have] better players, it’s even more fun to beat them. But we are ready for this challenge.

ESPN: Have you guys reached out to Gareth Bale here in L.A.? Have you had any contact with him now that he’s playing here at LAFC?

Hazard: I just spoke with him yesterday, just to ask him to come to say hello. He hasn’t answered, though, so maybe he’s coming soon.

ESPN: He hasn’t replied yet?

Hazard: Nah, he’s replying, but he didn’t come yet. He’s going to, for sure.

ESPN: OK, what did you make of his move to MLS and LAFC?

Hazard: I don’t know because he was [thinking about it] when we were talking last season. I think it’s a good challenge for him because he’s also going to the World Cup, so he just wants to play, and I think he’s in L.A., one of the best spots to be on the pitch, and we know he’s been unbelievable for like 15 years and still has a lot of quality to show the world that he’s still one of the best.

ESPN: When you see guys like Bale, Giorgio Chiellini, Lorenzo Insigne joining MLS, and you’ve seen the likes of Zlatan Ibrahimovic, David Beckham, Frank Lampard here before … have you ever thought about maybe moving to MLS?

Hazard: I don’t think about that that much. Now, I’m just focused on this season. I still have a contract for two more years. And then we’ll see in two years. I’ll be 33, so let’s see what can happen.

ESPN: You have that contract, but at the same time I know you had offers to maybe go to another club where you most certainly would have been a secure starter and play a lot of minutes, but you decided to stay at Real Madrid. Why?

Hazard: I want to show people that I can play for this club. That’s it. That’s my only reason.