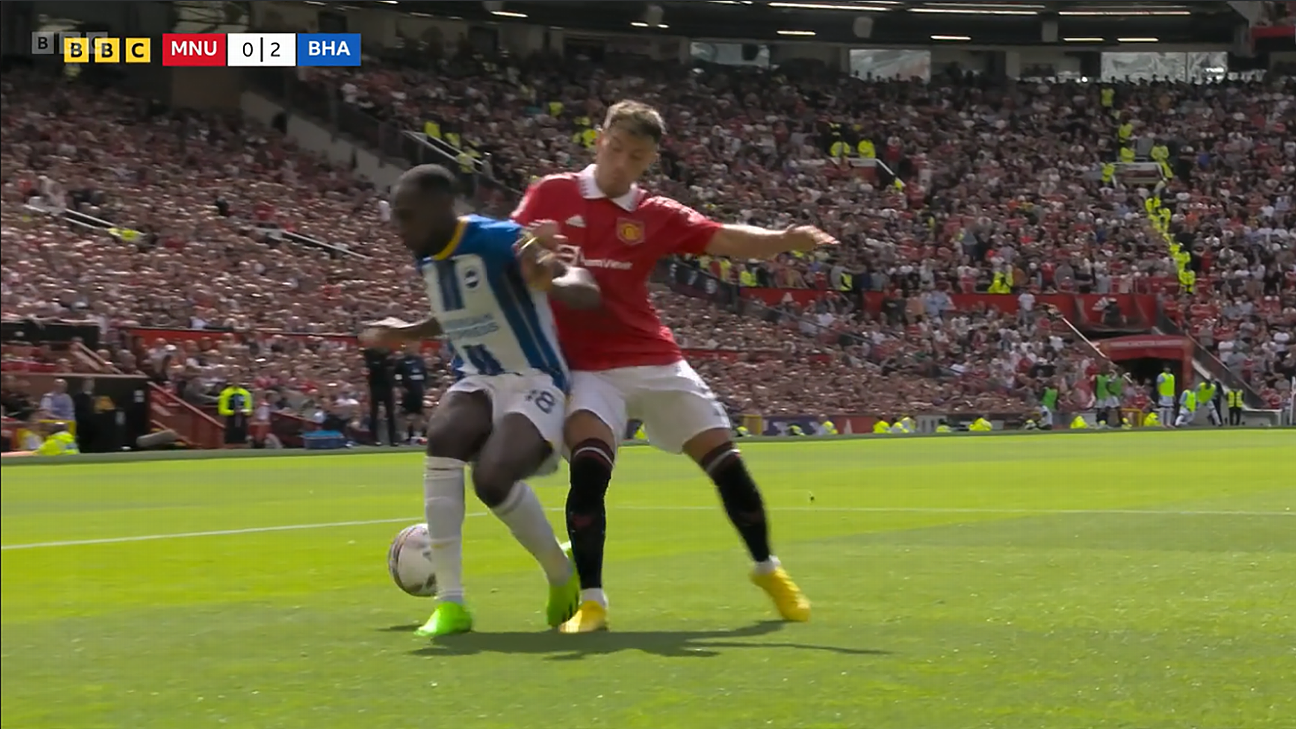 Video Assistant Referee (VAR) causes controversy every week in the Premier League, but how are decisions made and are they correct?

After each weekend, we take a look at the most high-profile incidents and examine the process both in terms of VAR protocol and the Laws of the Game.

What happened: Brighton & Hove Albion were 2-0 up at Old Trafford when Lisandro Martinez went into the back of Danny Welbeck inside the area and pushed him to the ground.

VAR decision: No foul, a subjective decision by the referee not to give a penalty.

VAR review: It should have been a penalty. Martinez had no intention to play the ball, and challenged Welbeck with his upper body forcing him to the ground. The referee, Paul Tierney, may not have seen the nature of Martinez’s challenge. But the VAR, John Brooks, decided Tierney had made no “clear and obvious error” not to award a penalty.

The Premier League said before the season began that it would continue with its high bar over interventions, doubling down on its policy of last season, and it’s situations such as this where its tested to its limit. There wasn’t a single VAR overturn across the opening weekend, when the average is usually just under one every three games, probably tells its own story.

In the German Bundesliga, they are going the other way. Rather than having such a high bar, they have instructed the VAR to tell referee to “have another look” at situations where they may change their mind if they watch it again. In the Premier League, the pitchside monitor is essentially there for a referee to confirm an overturn. The official still retains the right to reject it, but it didn’t happen once last season.

When you have such a high bar, the VAR is effectively looking for reasons to support the referee, rather than assessing an incident on its merits. It’s why this penalty wasn’t given, and why other incidents won’t get punished at times. This high bar for “clear and obvious” removes much of the VAR’s own subjectivity to advise a review, and is why supporters get so frustrated.

Would the referee have been told to have another look if this game were in Germany? Very probably. We don’t want the game to be stopped all the time for the ref to go to the monitor, but it feels that the Premier League still needs to work on when the VAR advises a review.

What happened: The game was goalless in the 25th minute when Scott McTominay was booked after fouling Moises Caicedo.

VAR review: We will get an incident like this almost every weekend, when a player catches an opponent on or above the ankle after playing the ball. It’s absolutely key that point of contact alone doesn’t determine what makes a card yellow or red, as force and intensity is equally, if not more important.

So, for the VAR to intervene and upgrade from a yellow, they have to be absolutely certain that the level of force and intensity is worthy of a red card. The decision of the referee on the pitch carries the most weight (which of course loops us back into the high bar discussion).

But McTominay was very lucky to escape being sent off.

Another similar challenge next week might result in a red card from a referee, and that’s because whether the referee shows a yellow or a red, neither may be subjectively wrong. It’s a major reason why VAR can never give you ultimate consistency in decision-making.

What happened: Alexis Mac Allister inadvertently put the ball into his own net after goalkeeper Robert Sanchez palmed the ball onto his boot, making the score 2-1 to Brighton in the 68th minute. There was a question of handball by Diogo Dalot and offside against Harry Maguire.

VAR review: There were actually three separate incidents, as at first there was a quick VAR check for a foul on Sanchez which was cleared, all leading to an extended review.

The ball did hit accidentally hit Dalot on the arm before the goal, but due to the change in the handball law in 2021 it can only be penalised if he scores. So, had the ball gone directly in, or had Sanchez failed to keep it out rather than palming it onto Mac Allister, the goal would have ruled out for handball.

Maguire was in an offside position when the ball came off Dalot, but this was not deemed to have had a material impact on the outcome. The goal came from Sanchez knocking the ball onto his teammate, rather than any influence from the United captain.


Finally from Old Trafford, Brighton’s first goal was onside due to the benefit of the doubt afforded to the striker, which was added to the technology at the start of the 2021-22 season. Welbeck’s toe was marginally ahead of the last defender, but within the limits to allow a goal to stand. When a decision is this tight, a single line is shown to the defensive player. 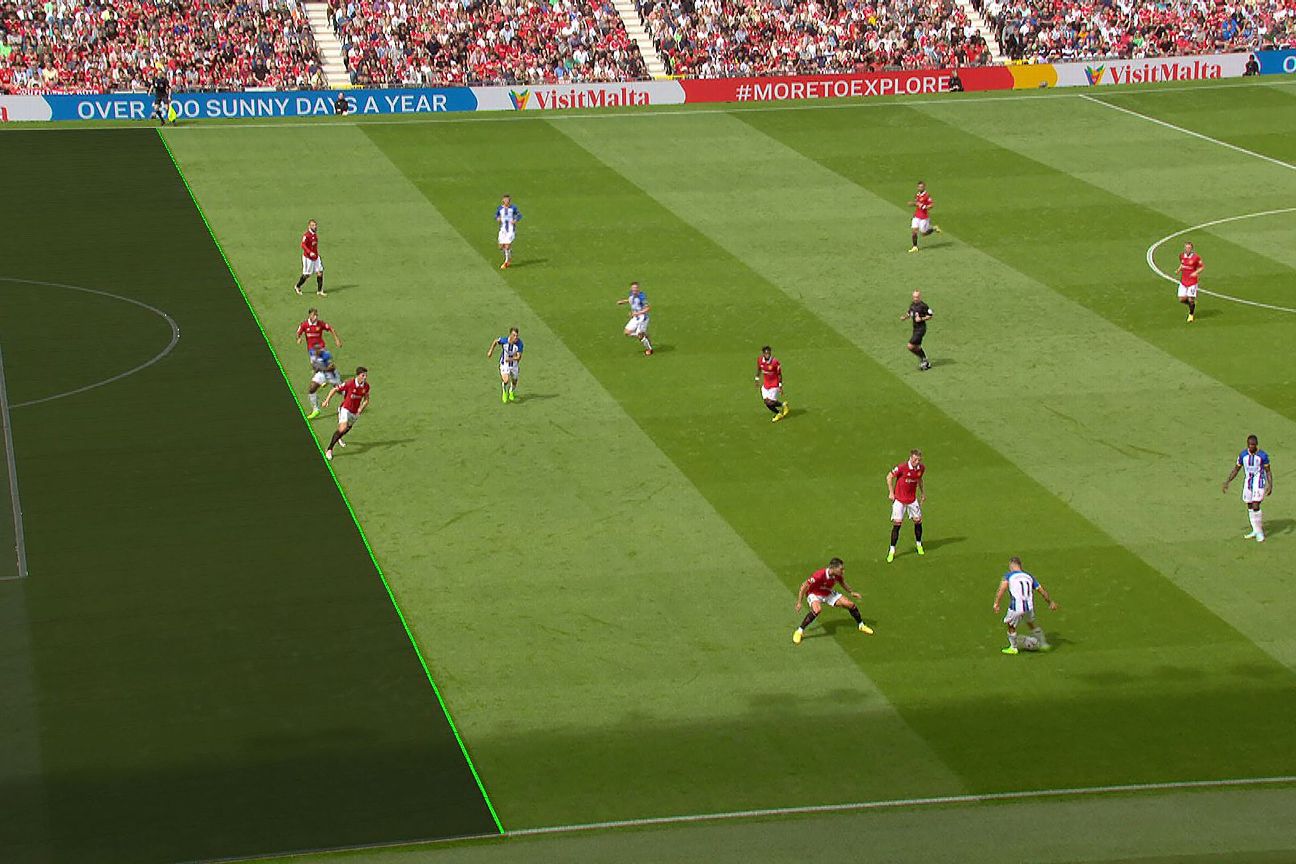 What happened: Leeds United were trailing 1-0 in the 14th minute when they were awarded a free kick just outside the area. It was delivered to the back post, with Rasmus Kristensen heading the ball back across goal ahead of goalkeeper Jose Sa. However, Sa clattered into the Leeds player after the ball had gone and made contact with his head with his glove.

VAR Review: Sa was lucky, because if referee Robert Jones had awarded a penalty there is no chance that the VAR, Jarred Gillett, would have advised it was overturned. But this is about how football judges the way goalkeepers try to win the ball. Would it be a foul against any other player? Most probably. Contact when a goalkeeper challenges for the ball aerially is rarely penalised, unless it is judged to be with excessive force.

This kind of situation is tough for the VAR, in terms of judging when they should become involved with what is seen as normal football contact not usually penalised within a game. A goalkeeper doesn’t have license to crash into an opponent after the ball has gone, but this incident shows just how much freedom they have and it just falls on the side of no intervention.

It’s different from the penalty Hugo Lloris conceded against Portugal at Euro 2020, with the France goalkeeper catching Danilo Pereira in the head with his fist as he tried to punch the ball clear.

We won’t see many occasions where the VAR becomes involved when goalkeepers collide with outfield players in the act of trying to play the ball in this way. That doesn’t mean the VAR gets it right all the time, however. Stuart Attwell was the VAR for Brighton vs. Liverpool last season when Luis Diaz was hit by a high challenge by goalkeeper Sanchez after the striker had headed towards goal to score. A red card was not advised on that occasion, when it certainly should have been. It’s fair to say the level of force applied in that challenge was much higher than Sa on Kristensen.

There was also a question of offside against Patrick Bamford for Leeds’ winning goal, but the technology showed the striker was just behind the last defensive player. 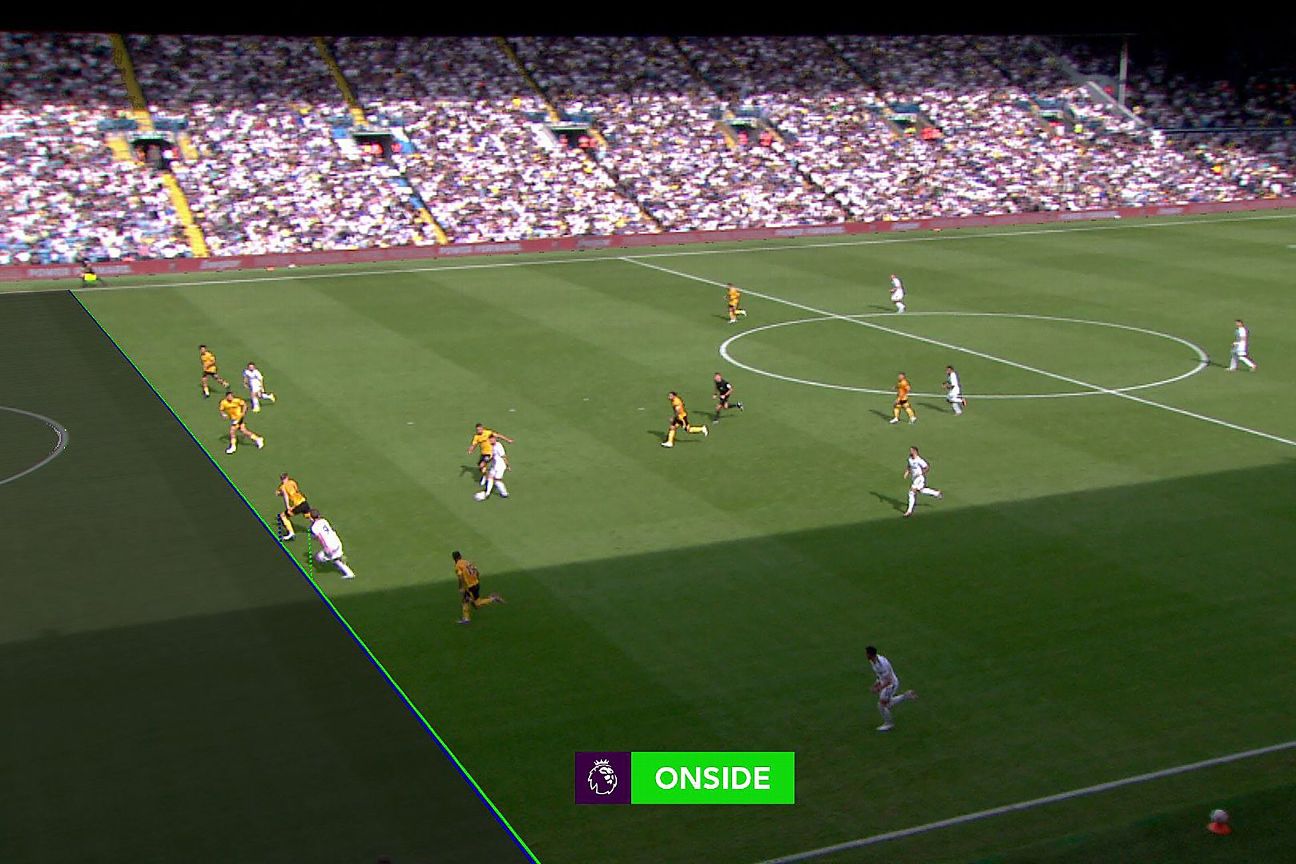 Possible foul in the build-up: Palhinha on Henderson

What happened: Fulham took the lead in the 32nd minute through Aleksandar Mitrovic, but earlier in the move Joao Palhinha appeared to catch Jordan Henderson, with the Liverpool midfielder going to ground.

VAR review: In the briefings ahead of the new season, the Premier League made it clear that the VAR would not go a long way back in an attacking phase to penalise what might be a trivial incident. While time is never the key determining factor, the goal came 17 seconds after the challenge.

Palhinha certainly stood on the foot of Henderson, and if referee Andy Madley had given the foul there probably wouldn’t have been too many complaints. But the official had managed the game in a lenient manner throughout, allowing play to continue if a player had gone to ground from minimal contact. It would have been out of keeping to how Madley had officiated the match.

Liverpool fans might also want to remember there was a possible foul against Virgil van Dijk in the build up to Mohamed Salah‘s 80th-minute equaliser.

What happened: Mitrovic went down in the box under a challenge from Van Dijk in the 70th minute, with referee Madley pointing to the spot.

VAR review: Did Mitrovoic make the most of the contact from Van Dijk? Most definitely. But there was without doubt knee-on-knee contact between the two players, and as such there’s no case for a VAR intervention.

What happened: With the score at 1-0 to Arsenal in the 35th minute, the ball hit the hand of Gabriel inside the area.

VAR review: VAR official Darren England looked at the incident and rightly decided that there should be no penalty awarded.

William Saliba had kicked the ball high in the air when making an interception, and it came down over Gabriel’s head and hit his arm when challenging with Odsonne Edouard.

Gabriel’s arm was in a natural position, it was not unduly extended away from his body, nor did he make a movement towards the ball in a deliberate fashion. If the VAR had given a penalty for something like this it would have caused far more controversy.

Information provided by the Premier League and PGMOL was used in this story.

Spain stunned by Swiss to relinquish top spot
Reyna won’t dwell on injury-hit 2021-22. He’s too focused on the World Cup
Pulisic out of USMNT’s World Cup warmup with injury
World Cup Stock Watch: Who’s hot and who’s not ahead of Qatar 2022
FA calls for compensation for Qatar workers