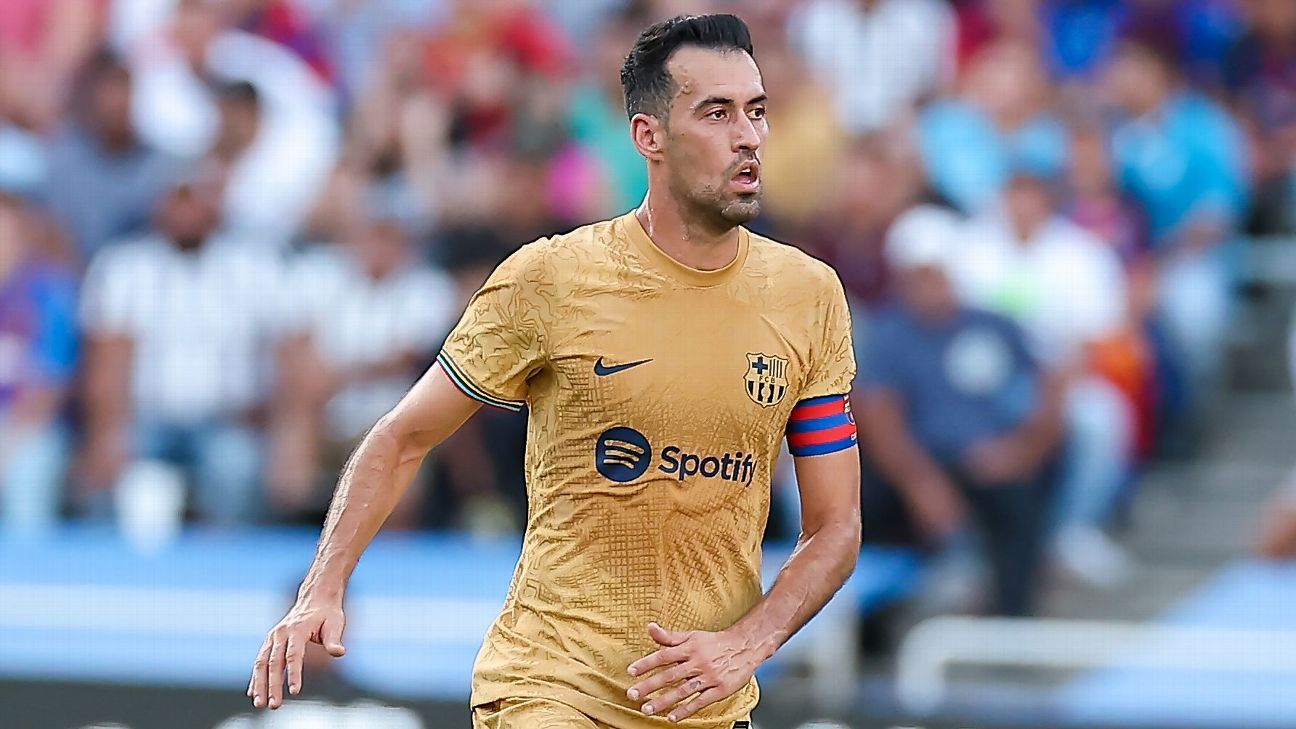 The summer transfer window is closed for the major leagues in Europe. However, with an eye on January, there’s plenty of gossip swirling about who’s moving where. Transfer Talk brings you all the latest buzz on rumours, comings, goings and, of course, done deals!

Barcelona‘s Sergio Busquets intends to make a switch to Major League Soccer at the end of this season amid links to Inter Miami CF, according to Sport.

The 34-year-old midfielder will be out of contract at Camp Nou next summer, and the report indicates that he has already made up his mind on his future.

Busquets remains a key player for the Blaugrana, having featured in five games this season, and that has seen the club’s hierarchy attempt to persuade him to sign a one-year extension through to 2024.

That would see his Barca career extended to 16 years, but the Spain international is keen to complete his career in the United States.

Manchester United defender Tyrell Malacia says the sheer size of the club was immediately apparent to him when he moved from Feyenoord.

Manolas, 31, has reached an agreement on personal terms, while the two clubs have also agreed a fee.

The Greece international, who has had spells at Roma and Napoli, will follow former Barcelona midfielder Miralem Pjanic to the UAE side.

10.20 BST: Benfica striker Goncalo Ramos has been plenty of attention after eight goals in 12 games so far this season.

Manchester United have been linked with the Portugal international, who is also on the shortlist of Bayern Munich and Newcastle United. But A Bola claims that Benfica will hand Ramos a big new contract (likely to have a big new release clause) to keep the vultures at bay.

09.44 BST: Barcelona winger Ousmane Dembele signed a new contract over the summer, until 2024, but L’Equipe has revealed it has a release clause.

Dembele, 25, was set to leave Barca on a free transfer after negotiations for a new deal dragged on, but the France international stayed and has impressed this season with four assists and two goals from eight games.

However, the agreement reportedly has a release clause of €50m, which will be valid next summer. The club would only get €25m of that fee, with Dembele getting the other €25m as a way to defer payment without impacting the club’s struggling finances.

If he continues his form, there will likely be plenty of clubs interested in him when the 2023 summer window opens.

09.09 BST: Barcelona are eyeing a move for Athletic Bilbao centre-back Inigo Martinez on a free transfer next summer, according to Mundo Deportivo.

Martinez, 31, is out of contract at the end of the season and has been linked with Barca regularly during recent years.

Barca signed Jules Kounde and Andreas Christensen in the summer to take their centre-back pool to five, including Eric Garcia, Ronald Araujo and Gerard Pique. However, all five are right-footed and coach Xavi Hernandez, per Mundo Deportivo, wants to bring in a left-footed central defender to add balance.

Any move for Martinez would likely depend on first moving on one of the centre-backs already at the club.

Pique, 35, is the most obvious candidate. The former Spain international has started just once this season with Xavi preferring the other four options ahead of him. He has a contract until 2024 — which is worth as much as €30m annually, according to a leak in El Mundo on Thursday — and Barca would benefit massively by ridding themselves of his salary.

08.42 BST: Flamengo vice president Marcos Braz says there was no transfer offer for attacking midfielder Joao Gomes before he signed a new contract through to 2027 — but he expects interest next year.

Gomes, 21, has been linked with Liverpool and Real Madrid, but he would struggle for a U.K work permit having never played international football at any level.

“There was no proposal for Joao Gomes, there was no consultation for him,” Braz told ESPN Brasil. “So, it is a lot of lies that have been spread about Joao Gomes since the beginning of these contract issues. But if you ask me if next year, in the middle of year, I think there will be something.

“We are very happy [with the new contract] and I am absolutely sure that he is very happy. Flamengo understood that they had to take a position on this. And we reached a consensus. We gave a salary increase, we protected Flamengo.”

The player has spoken of his desire to play for Liverpool one day.

08.00 BST: Frenkie De Jong has again reiterated he had no intention of leaving Barcelona despite summer interest from Chelsea and Manchester United.

However, the 25-year-old also hinted that Barca would have been prepared to allow him to leave if he agreed terms with another club.

“Chelsea and Man United interest? I already decided in May that I wanted to stay at Barcelona,” he told a news conference ahead of Netherlands’ UEFA Nations League fixtures this week. “I never changed this decision during the summer.

“I can’t give too much details away. But look … the club has it’s own ideas and I have my own ideas too and sometimes this clashes with each other. But at the end of the day things went okay.”

– Jude Bellingham‘s preferred destination is Real Madrid, according to El Chiringuito TV. The 19-year-old Borussia Dortmund midfielder has been linked with a number of top clubs — including Manchester City, Manchester United and Liverpool — but the report suggests that the LaLiga champions are leading the race for his signature. Dortmund have set a transfer valuation of €150m for the England star.

– AC Milan are continuing their search for a striker, and have identified FC Salzburg star Noah Okafor as a potential target in January, reports Calciomercato. The Rossoneri have been assessing options early after Divock Origi sustained an injury, and it looks as though 22-year-old Switzerland international Okafor is one of the first names on their radar.

– Shakhtar Donetsk are unwilling to move from their valuation for Mykhailo Mudryk‘s transfer, writes Fabrizio Romano. Arsenal are reported to have been in contact with his agents over a move, but the Ukrainian side are standing firm over a reported transfer fee of €50m. The 21-year-old winger featured for Ukraine on Wednesday evening as they suffered a 3-0 defeat to Scotland in the Nations League.

– Andrea Ranocchia is considering retiring from football, understands Nicolo Schira. The former Italy international recently signed for Serie A side Monza, but the 34-year-old has parted ways with them by mutual consent after suffering a fractured fibula during the league clash against Napoli in August.

– Scott Parker is being considered by Nice as their search for a manager goes on, reveals Foot Mercato. Sporting director Iain Moody suggested the 41-year-old head coach as an option after AFC Bournemouth decided to part ways with him, but the Ligue 1 club are looking at a number of candidates. Primary target Mauricio Pochettino is unlikely to be persuaded by Les Aiglons.