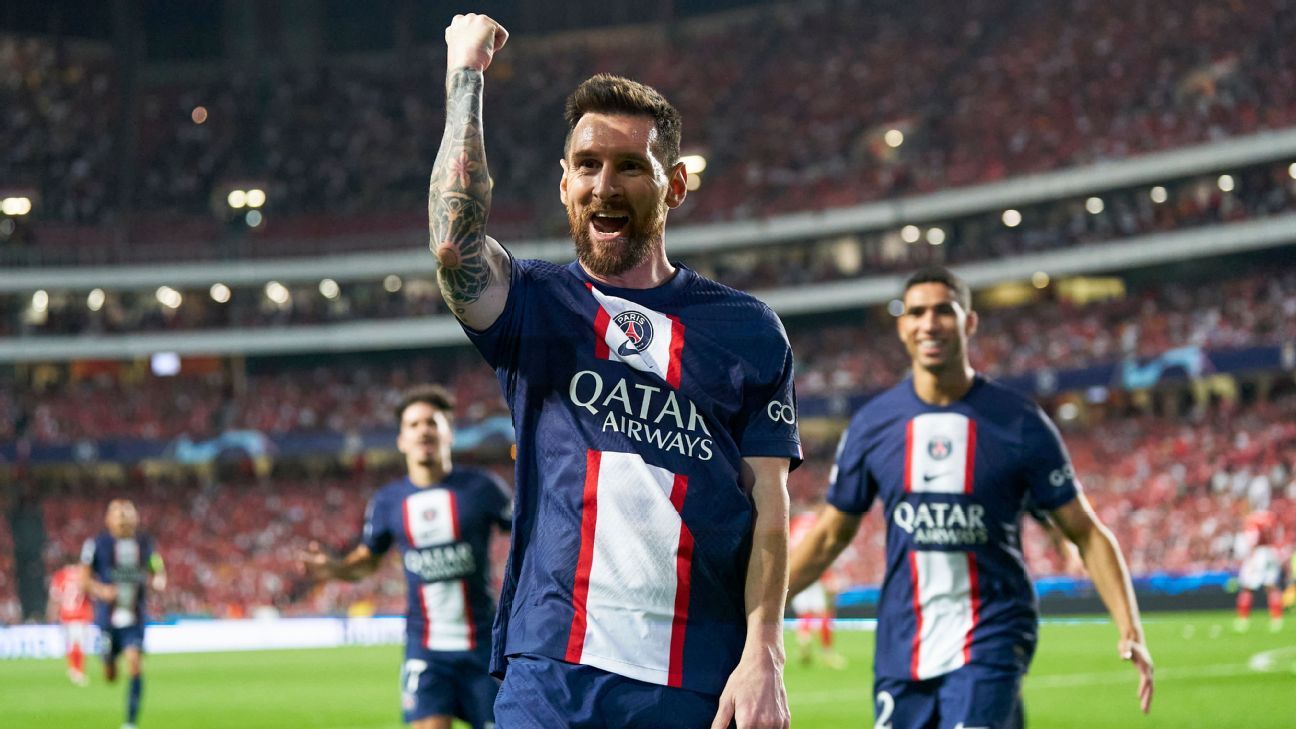 Lionel Messi set yet another record with a sublime opening goal but Paris Saint-Germain were held to a 1-1 draw by Benfica in their Champions League clash at the Estadio da Luz in Lisbon on Wednesday.

Messi opened the scoring midway through the first half after delightful link-up play involving Kylian Mbappe and Neymar before a trademark curling left-foot finish from the edge of the box. The goal meant the Argentine superstar became the first player in Champions League history to score goals against 40 different opponents.

But the lead did not last long with Benfica hitting back in the 41st minute when an inviting in-swinging cross from Enzo Fernandez touched off PSG defender Danilo and into the net.

The result means PSG and Benfica remain level on points at the top of Group H after three matches. The two teams will meet again in Paris on Tuesday. Juventus sit in third on three points after they got their first win of the competition at point-less Maccabi Haifa.

Benfica had begun Wednesday’s encounter the better team, with their press disturbing PSG’s rhythm. On multiple occasions, Gianluigi Donnarumma was called into action to keep efforts from the home side at bay.

But a moment of brilliance from Messi looked to have turned the game on its head.

All three of PSG’s star attacking trio were involved. Messi drove in from the right and found Mbappe who laid it off to Neymar before the Brazilian put it back into Messi’s path for a sumptuous finish.

The 35-year-old has now scored in six successive games for club and country, the first time he has done so in nearly four years.

PSG looked set to take control but some less than resolute defending gave Benfica a chance to draw level. There was an element of fortune, too, about the equalizer as Fernandez’s cross appeared to miss the head of Goncalo Ramos before glancing off the chest of Danilo and beating Donnarumma.

The French champions came out for the second half with a renewed intensity and several times came close to going back in front. Neymar clipped the crossbar with a spectacular overhead kick while Achraf Hakimi and Mbappe both forced smart saves from Odysseas Vlachodimos in the Benfica goal.

But Donnarumma had to be alert to deny Rafa Silva from close range following a surging run in the final 10 minutes.

Messi was substituted in the 81th minute. PSG coach Christophe Galtier indicated that the change for Pablo Sarabia only took place because Messi was tired.

“He signaled that he wanted to come off. On the final sprint, he felt tired. He came off as he was tired and a fresher teammate was a much better option at that moment,” Galtier said to RMC Sport after the game.

Ultimately both sides are unlikely to be too disappointed with a point each.

Shaqiri apologises to Swiss fans after 6-1 rout
Marcelo’s son, 13, signs first Real Madrid deal
Follow live: Morocco looks to secure their first-ever quarter-final appearence as they take on Spain in round-of-16 match
Ronaldo’s Portugal role ‘to be defined’ – Santos
The US accomplished a lot in Qatar, but left everyone wanting more