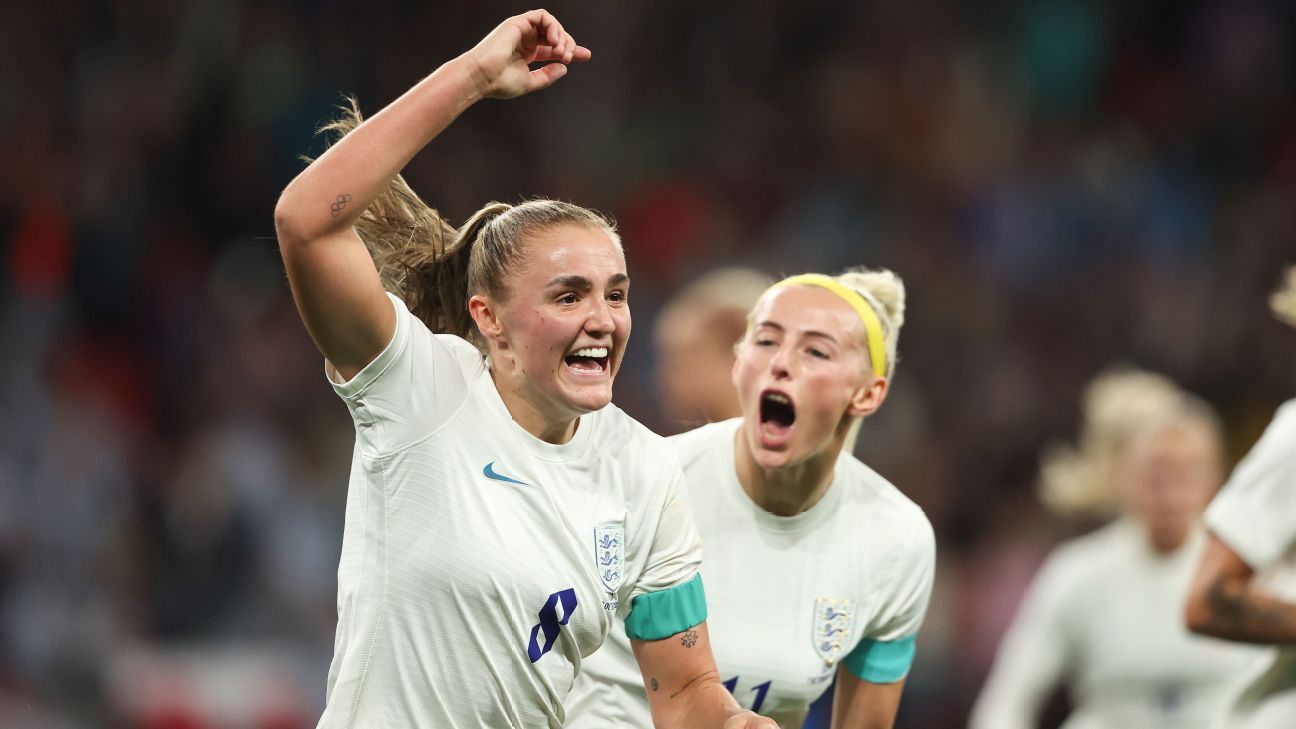 In front of a sellout crowd of just under 77,000, the entertainment on the field more than lived up to the hype, particularly in a thrilling first half that saw three goals. Lauren Hemp and a Georgia Stanway penalty gave England the goals they needed, either side of a goal from Sophia Smith that briefly drew the U.S. level.

There was controversy too, when the U.S. was denied a second equalizer before halftime when the Video Assistant Referee ruled it out for offside in the buildup.

Preparations for the game had been dominated by the release earlier in the week of a report from Sally Yates that detailed systemic abuse and misconduct in the National Women’s Soccer League (NWSL). Players from both teams united before kickoff in a sign of solidarity with victims of sexual abuse, holding a banner that read “Protect the Players” and wearing teal armbands.

The U.S. players had spoken of the game being a welcome distraction from an exhausting few days and once the whistle sounded, the intensity on the field was far above that of a regular friendly. This was, after all, a rematch of the 2019 World Cup semifinal, won by the Americans, and a meeting between U.S. and England teams that gone 23 and 22 games, respectively, unbeaten.

It was also a chance for both teams to measure where their preparations stand ahead of next year’s World Cup.

England, having already delivered a warning shot, had the home crowd jubilant after just 10 minutes. Euro 2022 Golden Boot winner Beth Mead was the creator, breaking clear down the right and sending in a low cross. U.S. defender Alana Cook failed to intercept the ball, only slowing it into the path of Hemp who had a simple finish from six yards.

It was the first time the U.S. had been behind in any game since last year’s Olympics semifinal against Canada, which was also the last time the Americans had been beaten. The deficit could soon have been doubled, too, but this time Hemp’s shot was blocked in front of goal.

Smith, though, was starting to make her presence felt at the other end. With Alex Morgan unavailable through injury, the Portland Thorns forward started in the center of the U.S. forward line.

And she soon showed the lethal touch in front of goal that saw her score 14 times in 18 NWSL appearances this year. Linsdey Horan robbed Stanway as England tried to play out of the back and the ball fell to Smith, who turned instantly on the edge of the area before firing into the bottom corner of the net to level the scores.

It did not take long for Stanway to atone for her error and continue a breathless first half. Less than five minutes after the U.S. pulled level, the referee was called over to review a high boot by Hallie Mace, on for the injured Emily Fox, on England’s Lucy Bronze just inside the area.

A penalty was duly awarded and Stanway made no mistake, sending U.S. goalkeeper Alyssa Naeher the wrong way.

If the USWNT were unhappy with the involvement of VAR in that instance, their frustration was multiplied minutes later. The visitors though they had levelled the scores once more after a glorious attacking move ended with Megan Rapinoe dummying a Smith cross into the path of Trinity Rodman who finished at the back post. A Long VAR review, though, ruled that Smith had been offside in the buildup by the smallest of margins.

The drama continued early in the second half, with Bronze and Smith going close to adding to the scoring at either end.

With less than 10 minutes remaining, the referee pointed to the spot for a penalty to the U.S. but replays showed the ball had clearly hit the back and not the arm of Hemp and the call was swiftly overturned.

But there was not to be another twist as England scored just its fifth win in 19 meetings with the four-time World Cup winners.